Pope Francis greets people during a meeting with UNITALSI, an Italian Catholic association for the transportation of sick people to Lourdes and other Marian shrines, in Paul VI hall at the Vatican on Saturday (Nov. 9). Photo by Alessia Giuliani, courtesy Catholic News Service

ROME (RNS) The Vatican on Friday downplayed reported mob threats against Pope Francis, just two days after a high-profile anti-mafia prosecutor said Francis could be a target from the ‘Ndrangheta mafia organization in southern Italy.

The Rev. Federico Lombardi, the Vatican’s chief spokesman, told reporters on Friday (Nov. 15) that the Vatican was “extremely calm” regarding a possible mob threat against the pope.

“There is absolutely no reason for concern, no need to feed alarmism,” Lombardi said.

The statement comes a day after Francis traveled the three miles between the Vatican City and the Quirinale Palace in Rome with his normal staff and without a police escort or any additional security to visit Italian President Giorgio Napolitano. 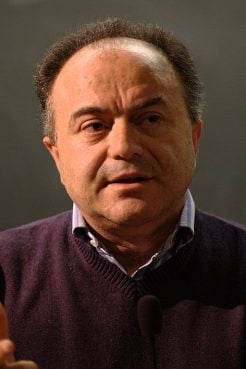 Anti-mob prosecutor Nicola Gratteri, who has himself been a target of threats from organized crime groups, made a series of remarks saying that Francis’ reform-minded agenda was making the ‘Ndrangheta “very nervous” and that the pontiff could become a target for the organization.

“For many years, the Mafia has laundered money and made investments with the complicity of the church,” Gratteri said. “But now the pope is dismantling the poles of economic power in the Vatican, and that is dangerous.”

Gratteri said the pope’s efforts to confront corruption and to modernize the scandal-scarred Vatican Bank  have attracted the mob’s ire. The Vatican Bank, which is going through reforms as part of a wider set of changes at the Institute for Religious Works, recently published its first-ever annual report and has closed accounts and made its books more transparent. In addition, the IOR published its first report on money laundering — a major mob activity — in May.

Francis has not been shy about blasting corruption wherever he can find it, including organized crime groups. Around the time of the IOR report on money laundering, the pope strongly criticized all of Italy’s organized crime organizations, including the ‘Ndrangheta. Earlier in the week, he railed against the evils of corruption, an address that prompted Gratteri’s remarks.