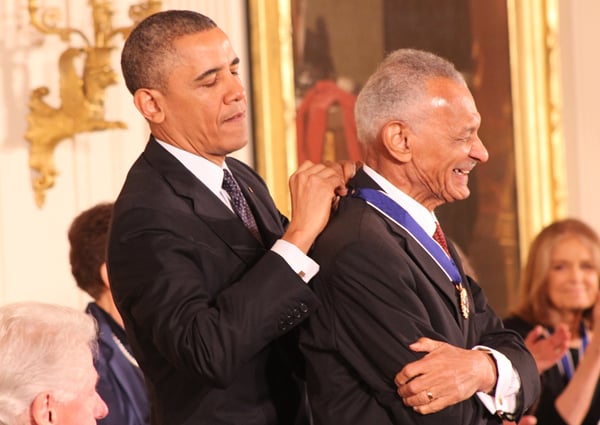 WASHINGTON (RNS) At age 89, the Rev. C.T. Vivian appears to be nowhere near any semblance of retirement. 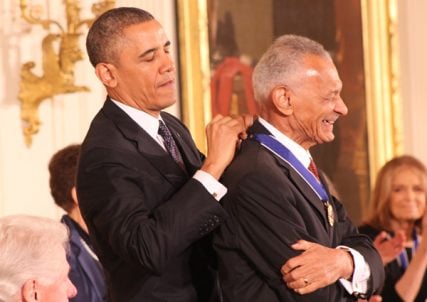 President Obama places the Presidential Medal of Freedom on the Rev. C.T. Vivian in the East Room of the White House on Wednesday (Nov. 20). RNS photo by Adelle M. Banks

The civil rights veteran started his social justice work in the 1940s, nonviolently protesting segregated lunch counters in Peoria, Ill., well before the Rev. Martin Luther King Jr. started his. He became part of King’s executive staff at the Southern Christian Leadership Conference in Atlanta in the 1960s.

Now, as one of the last surviving members of a generation of civil rights icons, he has returned as SCLC president amid other projects, from chairing a bank to mentoring youth.

On Wednesday (Nov. 20), he joined 15 others -- including former President Bill Clinton and media mogul Oprah Winfrey -- in being awarded the Presidential Medal of Freedom, the highest civilian honor bestowed by the president.

"The Rev. C.T. Vivian was a stalwart activist on the march toward racial equality. Whether at a lunch counter, on a Freedom Ride, or behind the bars of a prison cell, he was unafraid to take bold action in the face of fierce resistance," according to the White House citation read before President Obama draped the red, white and blue medal around the neck of Cordy Tindell ‘C.T.’ Vivian.

In an interview, Vivian said he has collected “stacks” of awards over the years, but he hopes this one will help draw attention to the causes to which he has devoted his life.

“People will listen that wouldn’t otherwise listen and that’s what’s important,” he said. “If it doesn’t help you help somebody, then it might as well not be there.”

After the White House ceremony, he added: "It's like the laying on of hands ... when the nation says that you have served well."

From his first “direct nonviolent action” in 1947, Vivian has been dedicated to nonviolence. “We hardly talk about it anymore," he said, "but until we talk about it we can’t change the world."

In Nashville, Tenn., Vivian worked closely with the Rev. James Lawson, a Methodist minister who trained him and others to resist people who opposed their desegregation efforts. Their work eventually led to the removal of “colored” and “white” signs above public drinking fountains.

The Rev. C.T. Vivian (far right) participates in the March Against Fear and Injustice in Decatur, Ala. in 1979. Photo courtesy of SCLC papers, Manuscript, Archives, and Rare Book Library at Emory University

“It was because of the effectiveness of our movement, and C.T. was one of our key pastors and key people,” said Lawson, who now lives in Los Angeles.

Vivian, then a pastor and editor for a Baptist Sunday School publisher, also was one of the first Freedom Riders to travel by bus in 1961 to Jackson, Miss., where he was arrested and beaten.

The incident that brought him international news coverage came in 1965 during a confrontation in front of a Selma, Ala., courthouse when Sheriff Jim Clark blocked civil rights activists’ attempts to register to vote. Vivian, who was struck and bloodied, did not back down, telling Clark: “If we’re wrong, why don’t you arrest us?”

“Many people did not have that kind of courage,” said the Rev. Gerald Durley, pastor emeritus of Providence Missionary Baptist Church in Atlanta, where Vivian worships. “There were many with courage, but not the kind of courage that C.T Vivian demonstrated.”

Vivian now serves as the director of the Urban Theological Institute at Atlanta's Interdenominational Theological Center, a consortium of African-American seminaries, and as board chairman of Capitol City Bank, a minority-owned bank with branches in eight locations in Georgia. Through his C.T. Vivian Leadership Institute, he fosters innovative leadership and career development for at-risk youth and college graduates.

“Dr. Vivian on numerous occasions has stated that he wants to have a ministry that deals with people where they are now versus dealing with the pie in the sky,” said George Andrews, the bank’s founder and former president.

But Vivian, who served for more than two decades on the staff of his Atlanta church, also has a reputation as a great preacher.

Joshua DuBois, the former special assistant to Obama, recalled being on the campaign trial in 2007 when Obama noticed Vivian sitting in the audience at Brown Chapel African Methodist Episcopal Church in Selma.

“He pointed him out and said, 'Oh my goodness, there’s C.T. Vivian,’” DuBois said of Obama. “’That’s the man that Dr. King called the greatest preacher that ever lived.”

In February, Vivian and Durley are scheduled to visit a multicultural school outside Los Angeles, to discuss leadership development, the same skills he uses to mentor teenage boys in Atlanta every Saturday.

“I think that there are very few people who are 89 who are still out there moving at the speed of C.T. Vivian,” Durley said.

President Obama agreed Wednesday: "At 89 years old, Reverend Vivian is still out there, still in the action, pushing us closer to our founding ideals."

The Rev. Bernard Lafayette, chairman of the SCLC, was Vivian's cellmate when they were jailed during the Freedom Rides. They stayed up “half the night” encouraging each other by sharing puns.

“The most important thing that I learned from C.T. Vivian and Jim Lawson is that you can do something about the problem rather than just talk about how bad it was,” said Lafayette, who was schooled in the art of preaching by Vivian in the late ‘60s.

Lawson called Wednesday's White House honor “a good step,” following on the heels of fellow civil rights activist Joseph Lowery receiving the same medal in 2009, the erection of the King Memorial on the National Mall and the placement of Rosa Parks’ statue in the U.S. Capitol.

“I think that the country makes a mistake in primarily medaling soldiers and not medaling citizens who reflect the best of the Declaration of Independence and the Constitution,” Lawson said. “And C.T., I think, happens to be one of the finest.”