WASHINGTON (RNS) Death may be inevitable, but one in three Americans – including most blacks and Hispanics – want doctors to never quit fighting it.

And that number has nearly doubled in 23 years, a new survey finds.

In 1990, 15 percent of U.S. adults said doctors should do everything possible for a patient, even in the face of incurable illness and pain. Today, 31 percent hold that view, according to a report released Thursday (Nov. 21) by the Pew Research Center’s Religion & Public Life Project.

The majority of U.S. adults (66 percent) still say there are circumstances when a patient should be allowed to die. At the same time, however, the never-say-die view calling for nonstop aggressive treatment has increased across every religion, race, ethnicity and level of education.

“We don’t really know why there is a doubling in that viewpoint,” said the survey’s author, Pew senior researcher Cary Funk, who found the shift “surprising.”

“When it comes to yourself, well, you might just hang on a little longer as you face the reality of identifying your own condition,” said Funk. Doctors “are always offering one more hope, one more treatment. You don’t know what the possibilities are.”

Questions about end-of-life care loom large for the 14 percent of Americans who are 65 or older. And nearly half (47 percent) of all U.S. adults surveyed say they have already faced these issues in the life of a relative or friend who had a terminal illness or was in a coma in the past five years.

The new “Views on End of Life Medical Treatments” survey reveals a significant divide by religion, race and ethnicity on what people say they would do if they were suffering great pain with an incurable illness.

More than six in 10 white evangelicals, Catholics and people with no religious identity would tell their doctors to halt treatment and let them die if they were in great pain and had no hope of improvement. For white mainline Protestants, 72 percent would rather stop treatment.

But the clear majority of black Protestants (61 percent) and Hispanics (57 percent) say they would want their doctors to “do everything possible to save their lives.”

However, patients’ doctors and families might have to guess at their end-of-life wishes if they can no longer communicate with them.

Only 37 percent of adults say they’ve given “a great deal of thought” to this issue. Just 35 percent have put their views in writing, either informally or in legal documents such as a living will or health care directive. Another 27 percent say they have spoken about their views to someone.

Such views can’t be guessed at. For example, the survey finds that people dread being physically dependent on others almost as much as they fear pain. A majority (57 percent) say they’d rather be allowed to die if they were suffering great pain with an incurable illness. Nearly as many (52 percent) would say the same if illness made them “totally dependent” on others for their care.

That aligns with the survey’s unique statistics on what people mean by a good quality of life in their last years: Measures of communication and enjoyment both outranked freedom from pain.

The Pew report, based on a survey of 1,994 adults, has an overall margin of error of plus or minus 2.9 percentage points. It was conducted between March 21 and April 8. The sample size did not include enough members of minority religions, such as Jews and Muslims, for analysis.

Pew also asked people about their moral views on suicide, on laws that allow “physician-assisted suicide” (where a physician prescribes lethal drugs that a terminally ill patient may choose to take) and on euthanasia, in which someone takes direct action leading to someone else’s death.

Many said they believe a person has “a moral right” under certain circumstances to commit suicide. 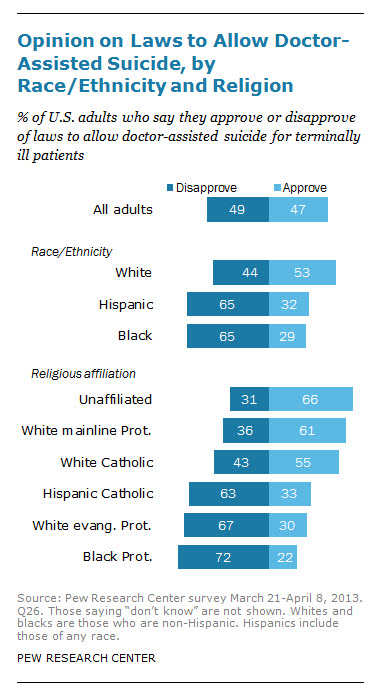 Physician-assisted dying is legal in Oregon, Washington, Vermont and Montana and goes by positive-sounding names such as the “Death with Dignity Act” or “Patient Choice and Control at End of Life Act.” But similar legislation has stalled or been defeated in several other states.

Pew senior researcher David Masci, in a report accompanying the survey, found that 14 of 16 religious denominations teach that suicide, assisted or not, and euthanasia are against the teachings of their faith.

The survey didn’t ask about God’s role. But theologians, clergy and philosophers were clear:  “Life is God’s to give and God’s to take away. They oppose any efforts to hasten death, and they also oppose forcing terminally ill people to go to extraordinary measures to keep themselves alive,” said Masci.

Only the United Church of Christ and the Unitarian Universalist Association say these choices are up to individuals. Buddhist and Hindu experts pointed out that suffering is viewed as part of the cycle of karma, and interrupting that could trouble someone in his or her reincarnated next life.

Still, many religious voices allowed a sort of moral wiggle room for withdrawing or withholding some treatments that may prolong dying rather than extend life. The line between those two is not always clear, said Ayman Shabana, a visiting fellow at the Islamic Legal Studies Program at Harvard Law School.

However, Masci said, the survey shows that “just because someone identifies as a particular denomination, doesn’t mean that they know the teaching and, even if they do, that they have squared it with their own views.” For example, nearly half (47 percent) of U.S. adults approve of laws allowing doctor-assisted death. That’s a statistical tie with the 49 percent of Americans who oppose such laws.

He traced the court cases, legislation and controversies, such as the death of Terri Schiavo in 2005 when her husband battled to remove her from the artificial food and hydration that kept her alive in a persistent vegetative state.

In an interview, Masci observed that individual views are chiefly shaped by family dynamics, by new medical technologies and by the way society views personal autonomy.

Today’s cultural emphasis on individual autonomy “comes out of the same firmament as other rights movements of the last half-century,” he said. But the belief that people need to be free to make their personal choices is not the only driver in end-of-life views.

“We live in a very different world than people 100 years ago. The idea that there is a family home where people are born, congregate and die has largely faded. Fewer than one in three Americans die at home now and technologies have prolonged the last stages of life so people are faced with very different choices today,” Masci said.