Isaac Hunter, 36 and father of three, had resigned from his own megachurch after he admitted that he had engaged in an affair with a staff member. His wife of 13 years had filed a domestic-violence petition against Hunter, describing him as unstable, erratic and suicidal, according to the Orlando Sentinel.

Responding to a call from his brother who received a text message speaking of suicide, police found Isaac Hunter dead from a gunshot wound, said Officer Rob Pelton, Altamonte Springs Police Department spokesman. Police are investigating the death as a suicide, and the medical examiner will have a final cause of death in the next 10 days.

“As we look back on Isaac’s ministry here at Summit, we are profoundly grateful for the impact he had in all of our lives,” wrote Pastor Jeff Kern of Summit Church, where Hunter served before resigning more than a year ago, on the website of the congregation in Orlando, Fla. “We know that Isaac is deeply loved by Jesus, even in a time of brokenness, and are assured of his continuing relationship with Christ, now in heaven.” 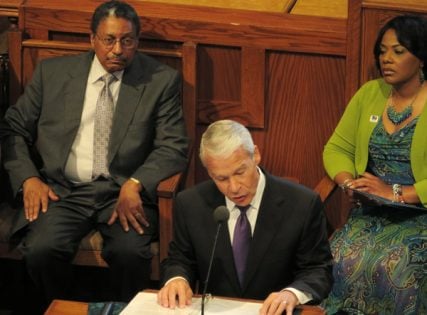 His father Joel Hunter has been a spiritual adviser to President Obama, speaking and praying with him regularly. Hunter’s spokesman said the Hunter family does not have a statement at this time.

Isaac Hunter was the second of Joel Hunter’s three children. His resignation in the fall of 2012 was one of three Orlando pastors who left their pulpits after admitting affairs.

Isaac Hunter founded Summit Church in 2002 from a youth ministry at his father’s church that quickly grew to five campuses and a congregation of about 5,000.

Vernon Rainwater, another pastor at Joel Hunter’s Northland Church posted an announcement for the church of more than 15,000 people.

“All of us are grieving for the Hunter family, and we will deeply miss Isaac. Words cannot express the sorrow we’re feeling,” said Rainwater.

“We love this family and are so grateful for the impact they have had on each of our lives. I have loved Isaac since he was a child, and I know this … Isaac loved Jesus. And we are assured of his continuing relationship with Christ now in heaven.”

The death was the second suicide related to a high-profile megachurch pastor this year; Rick Warren’s son Matthew committed suicide in April, and Rick and Kay Warren have talked openly about their son’s battle with mental illness in media interviews.

Former Southern Baptist Convention president Frank Page published a book this year about his daughter’s suicide in 2009. A pastor in Georgia committed suicide after a Sunday morning service in November.

“My heart is broken for the Joel Hunter family in the loss of their beloved Isaac. No words, just tears,” Kay Warren tweeted.

In April, a few weeks after his son’s death, Rick Warren tweeted about the gun someone sold his son.

“Someone on the Internet sold Matthew an unregistered gun. I pray he seeks God’s forgiveness. I forgive him. #MATTHEW 6:15,” the pastor tweeted, though the tweet has since been deleted.

Cameron Strang, editor of Relevant magazine, posted on Facebook that Isaac Hunter had been his pastor for several years.

“Please pray that somehow, some way, someday, good will ultimately come of this,” Strang wrote. “That this tragic story can be used to reach and rescue others who are silently battling the same demons Isaac did.”

The World Evangelical Alliance issued a statement on the death, noting that the Hunters’ 5-year-old granddaughter of another son died of brain cancer just three years ago.

“Not only is Joel Hunter a long-time member of our North American Council, a personal advisor, but he is a dear friend. Today, I join the thousands of people in grieving the passing of their son Isaac,” said Geoff Tunnicliffe, secretary general of the WEA.

Sociologists studying the relationship between suicide and religion found in a 2012 study that Catholics are less likely to accept or commit suicide. Earlier this year, LifeWay Research suggested that nearly half of evangelical, fundamentalist, or born-again Christians (48 percent) believe that people with serious mental illness can overcome their condition through prayer and Bible study alone.