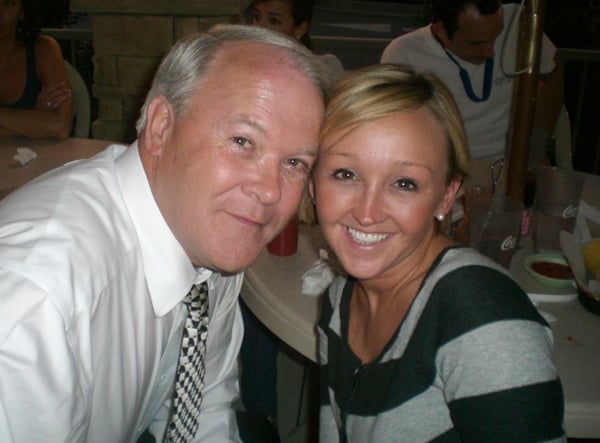 The Rev. Frank Page, former president of the Southern Baptist Convention, with his daughter Melissa Page Strange, 32, who took her own life in 2009. Photo courtesy Frank Page

(RNS) Frank Page is still haunted by his daughter Melissa’s last words: “Daddy, I love you.”

In 2009, Melissa Page Strange committed suicide after enduring myriad challenges, from cancer to prescription drug addiction. Now, as the White House unveils a new initiative to combat mental illness, her father has a new calling to help others cope with similar grief.

Page, 60, is the president of the Southern Baptist Convention's Executive Committee and a former SBC president. His new book, “Melissa: A Father’s Lessons from a Daughter’s Suicide,” talks about how he managed to keep going after his daughter’s suicide, Melissa's “letters from the grave,” and how he braces for tough questions.

Q: You could have kept your family’s pain after your daughter’s suicide to yourself. Why did you decide to write this book instead?

A: I hope the real reason for the book is not just my self-centered desire for healing but to help people who are experiencing this grief with family or friends or church members or co-workers. One of the big reasons is also to reach out to people who are considering suicide.

Q: You wrote that suicide brings so many unanswered questions. Can you talk at all about how Melissa came to that point?

A: She struggled her whole life -- not that she ever really threatened suicide.

Q: You seem concerned about drugs and depression leading to suicide, but also reliance on drugs for depression and other mental ailments.

A: I’m not casting doubt or blame on anybody. Melissa did what Melissa did. But I wish that we would be a little more careful in our use of drugs and our prescription of drugs. They are powerful forces, and when one already has the previous disposition that she did, it’s like throwing a lighted match on a gasoline-soaked pile of rags just ready to go.

Q: You preached the Sunday after your daughter’s funeral. How were you able do that?

A: I made a commitment days after that I would not allow Satan to do what I believe he wanted to do and that was to destroy my ministry and to destroy my witness.

But the truth is in those first few months I was in a fog. I’m not certain exactly how I functioned, and I think that is a God-given defense mechanism for those who are hurting. To keep you from feeling all the pain at once he puts us in this holy fog and so while you function I guess fairly well, you do so in kind of a state of surreal unreality.

Q: Were you angry with God or did you ever blame God for allowing this to happen?

A: I never blamed God. God is the giver of every good and perfect gift. Yes, he allowed death but he was not responsible. I give blame to the evil one, not to our Lord.

Q. Why has the church not dealt with this issue more?

A: In the Christian community, sometimes -- not always -- we like things to be in pretty little packages and everybody to be happy. Sometimes we’re not as honest as we ought to be, not as transparent as we should be. Sometimes there are churches that do deal honestly with these things and we need more of that.

Q: What do you say to those who believe that suicide is basically a ticket to hell?

A: Scripture does not teach that. In the Bible you will find that the love of God transcends those kinds of things. I believe that if a person has a relationship with Christ, it is a family-forever relationship.

Q: What comfort can you give to non-Christians who are dealing with a loved one’s suicide?

A: I encourage them to deal with the same kind of honesty and transparency that everyone should, to seek help from those who love them, to seek a support group. While they can get good help from family and friends and professional health care providers, the ultimate source of peace I believe with all my heart is found only in Christ.

Q: You write about discovering yellow sticky notes from your daughter in boxes of books after her death that she helped you pack up. What was that like?

A: When I pulled these things out of storage, it’s actually to me letters from the grave. I keep them in my portfolio that I take with me everywhere I go. They’re precious. Sweet notes from my daughter.

Q: The Southern Baptist Convention annual meeting is coming up. How do you prepare yourself for the reaction to your book you are bound to get in every hallway?

A: I have to try to really pray that the Lord will keep me from breaking down and crying. I don’t mind crying in front of people. I really don’t, but I can’t talk when I do. And so I just beg God every day that he would fill me full of his Spirit and allow me to be used for his glory without breaking down too much.

Q: What would you say if you could speak to Melissa now?

A: I’d say, “Honey, please come home. I miss you. Daddy loves you more than anybody.”