CANTERBURY, England (RNS) Britain’s highest court ruled Wednesday (Dec. 11) that Scientology is a religion, giving a 25-year old-woman and her fiance the legal rights to marry at the church’s headquarters in London. 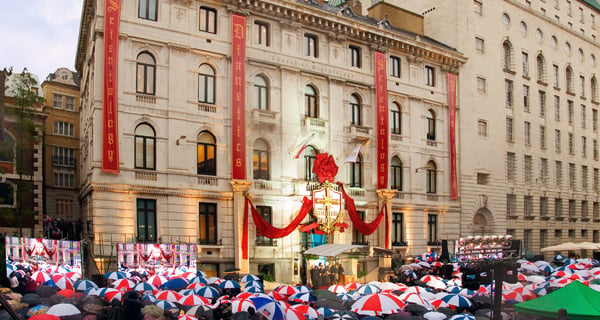 (RNS) Crowds celebrate the 2006 opening of the United Kingdom’s Church of Scientology in London.

Louisa Hodkin appealed to the Supreme Court after a lower court ruled that services run by Scientologists were not acts of worship.

In his ruling, Supreme Court Justice Lord Roger Toulson wrote that religions should not be confined to those with belief in a supreme deity. “To do so would be a form of religious discrimination unacceptable in today’s society,” he said.

“We are really excited that we can now get married,” Hodkin said in a statement after the ruling. ”My fiance (Alessandro Calcioli) and I have always believed in the fairness of the British legal process. It has been a long and demanding journey, but the Supreme Court decision today has made it all worthwhile.”

In 1970, a British court ruled that Scientology did not involve religious worship so no one could marry in its chapels. As a result of Wednesday’s ruling, the Registrar General of Births, Marriages and Deaths will now recognize marriages performed in Scientology chapels.

The Church of Scientology was not a party to the legal action, but the Supreme Court’s unanimous ruling is seen as an important victory for an organization often described by British academics, lawyers and theologians as either a harmless philosophy or a dangerous cult.

L. Ron Hubbard founded Scientology more than half a century ago. Since 1954, it has spread to more than 160 countries. In 1994, the church passed a major legal hurdle in the United States when the Internal Revenue Service granted tax exemptions to every Scientology entity in the country.

Opinion
Shocked at Falwell claims? Christian websites reveal evangelicals’ adventurous sex culture.
Culture
How a quarantine matchmaking project for Muslims found itself navigating anti-Blackness
Religion Remixed
Fleshly sacraments in a viral, virtual world
News
Benedict XVI steps back from book that put him at odds with pope
News
For immigrant families, a sweet wedding tradition preserves a taste of home
© Copyright 2020, Religion News Service. All rights reserved. Use of and/or registration on any portion of this site constitutes acceptance of our User Agreement and Privacy Policy, Privacy Statement and Cookie Notice. The material on this site may not be reproduced, distributed, transmitted, cached or otherwise used, except with the prior written permission of Religion News Service.