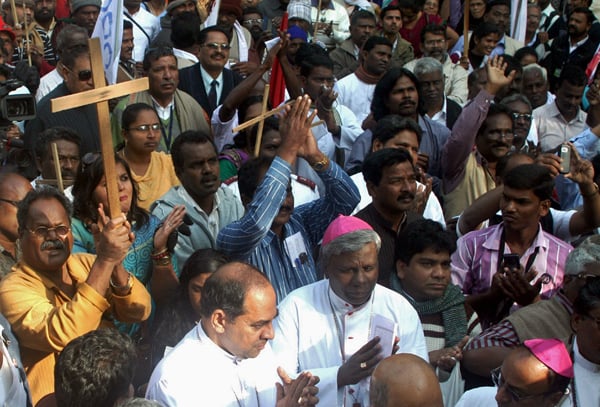 Organized jointly by confederations of churches and Muslim groups in India, the demonstrators demanded affirmative action for Dalits (formerly “untouchables”) who have converted to Christianity or Islam.

Only Dalits who have converted to Hinduism, Sikhism or Buddhism are entitled to affirmative action slots in jobs and educational institutions, among other protections.

“We have lodged a formal police complaint against policemen who assaulted nuns and Christian women,” said the Rev. Richard Howell, an evangelical leader in Delhi.

Refusing to leave the area near the parliament, the protesters — including Catholic, Protestant and Muslim leaders — courted arrest.

“ … Government after government have been turning a deaf ear to the demand of Christians,” Catholic Archbishop Anil J.T. Couto of Delhi said in a statement. “Now they are going to the extent of brutally beating up our priests and nuns and now arresting us too.”

Couto was among those arrested. He and others were subsequently released.

An estimated 70 percent (about 17 million) of India’s 23 million Christians are Dalits.

A petition filed in the Supreme Court in 2004 remains pending because the federal government has yet to give a conclusive reply to the court, said John Dayal, a Christian activist and member of the government’s National Integration Council.