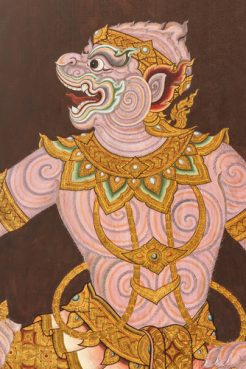 An image of Hanuman

OKLAHOMA CITY (RNS) A few days after a group of Satanists announced plans to donate a memorial on the grounds of the Oklahoma Capitol, a Hindu organization said it would apply for permission to erect a statue of Hanuman.

The two groups suggested that Oklahoma legislators opened the door to such displays when they pushed through a bill in 2009 giving permission for a Ten Commandments monument to be placed on the Capitol grounds.  The monument, paid for with private funds, was placed there in 2012.

Hanuman, the monkey king, is an important deity in Hinduism, the world’s third largest faith. He is most popular among devotees of the avatar Lord Ram and others following a devotional path. There are more temples and roadside shrines to Hanuman than to any other deity in all of North India. For Hindus, Hanuman is one of the finest exemplars of a life of love and service of God.

The Ten Commandments monument is the subject of a lawsuit filed by Baptist minister Bruce Prescott and the American Civil Liberties Union. The monument is also the reason groups are now filing for permission to place additional monuments — an equal-access issue of which Oklahoma legislators were aware when they passed the legislation.

Rep. Earl Sears, a Republican from Bartlesville, Okla., who called the Satanist monument offensive, was less inclined to speak directly about a Hindu monument.

“We have a system in place to process these requests,” Sears said. “I stand by my comments that we are a faith-based nation, and I know that once you open the door on this sort of thing that you can’t know where or how it will end up. We’ll just let the system work.”

Trait Thompson, chairman of the Oklahoma Capitol Preservation Commission, which approves all monuments, declined to comment, saying only that a good-faith application would be voted on by the commission.