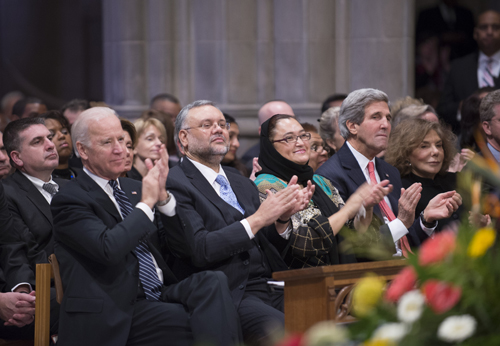 WASHINGTON (RNS) Joe Biden was a young senator from Delaware when he was first exposed to the evils of apartheid. As the only white lawmaker in a congressional delegation to South Africa, he resisted security officers who tried to usher him through one door, and his more senior black colleagues through another.

“I had what we Catholics call an epiphany,” the vice president said Wednesday (Dec. 11) as official Washington packed the National Cathedral to recall the life and legacy of former South African President Nelson Mandela.

“He was the most impressive man or woman I have ever met in my life,” Biden said of Mandela, who died peacefully on Dec. 5.

Biden told of a second shock, when the hero of South Africa’s anti-apartheid movement stepped into his Capitol Hill office, after 27 years in prison, and expressed no bitterness toward his captors.

“My jailers were only doing their job and became my friends,” Biden recalled Mandela saying. “They had families. When I left the island, they embraced me and wished me well.”

Music underscored the remembrances, with the South African Community Choir and Morgan State University Choir together singing “Hamba Kahle” -- "farewell" in the Xhosa language -- and the a cappella group Sweet Honey in the Rock revving up the crowd with an exuberant medley of civil rights anthems, including “We Shall Not Be Moved.”

Opera star Jessye Norman made a surprise appearance between the cathedral’s pulpits -- her singing growing louder as she approached the microphone -- and filled the soaring cathedral with a slow and strong “Amazing Grace.”

Peter Yarrow, of the folk trio Peter, Paul and Mary, sang a song the group wrote as they protested apartheid in the 1980s, and expressed pride that Mandela had heard their “No Easy Walk to Freedom” in his prison cell off the coast of Cape Town, on Robben Island.

But Andrew Young, the civil rights leader and former U.N. ambassador, told the audience of Americans, South Africans and others that this is no time for congratulations over the defeat of apartheid in South Africa or oppression anywhere.

When Jesus meets Bobby Kennedy, the Rev. Martin Luther King Jr. and Mandela, Young said, “He will smile and say: ‘You got a good job started but you really didn’t feed the hungry. The hungry can’t eat hope.'”

“We have nothing left to celebrate,” Young continued, and then referred to Mandela by his nickname. “I hear Madiba saying: 'We showed you the way, just keep on marching.'”

Delivering the homily, the Rev. Allan Boesak, director of the Desmond Tutu Center administered by Butler University and Christian Theological Seminary, chose a similar theme, pressing the audience to carry Mandela’s struggle to people who still yearn for freedom.

“It ain’t over!” he intoned, over and over, to wild cheers.

August 11, 2020
Related Posts
By Jack Jenkins
New liberal Christian groups hope to turn Trump voters to 'Pope Francis voters'
By Cheryl Townsend Gilkes
How Kamala Harris delivers on 150 years of Black women’s political history
By Jack Jenkins
Democrats plan interfaith service to kick off convention
By Yonat Shimron
Kamala Harris is more than her gender and race. She is also the future of American religion.
By Mark Silk
Trump’s 2020 religious attack on Biden harks back to 1800