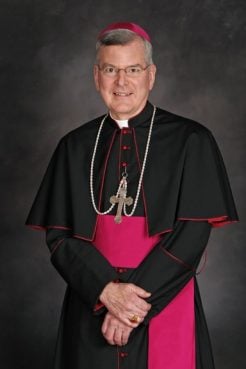 (RNS) Twin Cities Archbishop John Nienstedt, already under fire for failing to take action against priests suspected of abuse, announced Tuesday (Dec. 17) that he is stepping aside temporarily after a minor accused the outspoken archbishop of touching his buttocks during a group photo after a 2009 confirmation ceremony.

In what he called “a difficult letter for me to write,” Nienstedt says he learned of the allegation during the weekend. He said he does not know the young man and he presumes his accuser to be “sincere in believing what he claims.”

But he rejected the charge as “absolutely and entirely false.”

“I normally stand for those photos with one hand on my crozier (staff) and the other either on the right shoulder of the newly confirmed or on my pallium (the short stole), which hangs from my chest,” Nienstedt explained. “I do that deliberately, and there are hundreds of photographs to verify that fact.”

The age of the accuser has not been disclosed. Catholic children can be confirmed between the ages of 7 and 16, after they receive First Communion, though confirmation usually takes place when they are about 13 years old.

“I have never once engaged in any inappropriate contact with a minor,” he added. “True, I am a sinner, but my sins do not include any kind of abuse of minors.”

A statement from the Archdiocese of St. Paul and Minneapolis said that as soon as the allegation was made, it was reported to police as required by civil law and church policies. Nienstedt decided to temporarily step aside, pending the outcome of the police investigation, after consulting with the pope’s ambassador to Washington.

Nienstedt could return to his duties right away if he is cleared; there is no timetable for the investigation, though the archbishop wrote that he hopes it can be “can be thorough but quick.” He said he will have no further public comment on the matter until it is resolved.

Nienstedt acknowledged that he has been a lightning rod for criticism because of his “strong stands” on a range of culture war issues. He has been especially outspoken against gay marriage, which Minnesota legalized earlier this year in part because of what political observers say was a backlash against Nienstedt’s harsh rhetoric.

In September, Nienstedt said he believes gay marriage, contraception, sodomy and pornography are the work of Satan, and in 2012 he wrote to the mother of a gay man to say her “eternal salvation” depended on accepting church teaching against homosexuality.

But for much of this year Nienstedt has been on the defensive over reports — contained in church documents leaked by a whistleblower who worked for the Archdiocese of St. Paul and Minneapolis — that he shielded and even promoted priests accused of sex abuse and possessing child pornography.

In a 2012 draft of a letter to the Vatican on the priest with pornography, Nienstedt wrote that if he did not report the priest it “could expose the archdiocese, as well as myself, to criminal prosecution.” Nienstedt never sent the letter, however, and insisted he had done nothing wrong and followed all appropriate church and civil laws.

But local police reopened the investigation in that case — though they say Nienstedt is not a target — and the archbishop established a task force to review all church records and recommend reforms to tighten archdiocesan policies.

The archdiocese said that the response to the accusation against Nienstedt showed that its policies were working.

Just last Sunday (Dec. 15), Nienstedt delivered a homily at a parish in Edina, Minn., and apologized for not being more aggressive in pursuing abuse cases when he took over as archbishop in 2008.

“When I arrived here … one of the first things I was told was that this whole issue of clerical sex abuse had been taken care of and I didn’t have to worry about it,” he said. “Unfortunately I believed that. … And so my biggest apology today is to say I overlooked this. I should have investigated it a lot more than I did. When the story started to break at the end of September, I was as surprised as anyone else.”

The explanation did not mollify critics inside or outside the church, but Nienstedt was praised for voluntarily stepping aside Tuesday while the allegations are investigated by police.

“This action demonstrates that no one in the church, whether bishop or employee, should be protected from the consequences of such allegations,” said a statement from Voice of the Faithful, a reform group that had already called on Nienstedt to resign because of his past record on abuse cases.