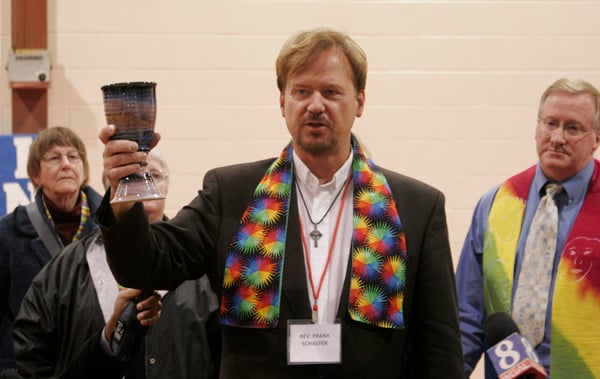 The Rev. Frank Schaefer serves Communion to his supporters at the end of his two-day church trial. Photo by Kathy L. Gilbert/United Methodist News Service

(RNS) The Rev. Frank Schaefer was defrocked by United Methodist officials in Pennsylvania on Thursday (Dec. 19), after he refused to conform to denominational rules that prohibit ministers from officiating at same-sex weddings.

Schaefer, who pastors a church in Lebanon, Pa., said he plans to appeal the decision.

The Eastern Pennsylvania Conference Board of Ordained Ministry had no choice, Bishop Peggy A. Johnson said in a statement. A two-day church trial last month found Schaefer guilty of violating church law by performing the 2007 same-sex wedding of his son.

A jury suspended him for 30 days, during which he was asked to decide whether he could comply with church law; if not, he was to surrender his clergy credentials.

Earlier this week, Schaefer said he would not voluntarily leave the ministry. He has said his actions were motivated by love, not defiance.

The United Methodist Church accepts gay and lesbian members, but its Book of Discipline calls the practice of homosexuality “incompatible with Christian teaching” and bars clergy from performing same-sex unions.

Schaefer’s trial is the first since the United Methodists’ 2012 General Conference upheld the denomination’s 40-year-old rules on the issue. At least four additional clergy face trials amid a growing wave of public disobedience to church law. The church’s rule cannot change until the next General Conference, in 2016.

“I would hope as these other cases come up, it might lead more folks in the church to really dialogue about how we deal with difficult issues and begin to understand who we are as children of God,” said the Rev. Gary MacDonald, a Methodist minister and director of advanced ministerial studies at Southern Methodist University’s Perkins School of Theology.

“He was not the first United Methodist minister to be defrocked for crossing these lines and will not be the last,” he said.

“There appear to be contradictions between the many affirming statements and these statements,” Johnson said. “This has led to confusion by many from the outside of the church wondering how we can talk out of two sides of our mouth.”

Her comments came in response to a letter from 44 Pennsylvania clergy calling for her “to take a stand” supporting gays.

She also said church trials on the issue “are not helpful,” and she would try to prevent them in the future.