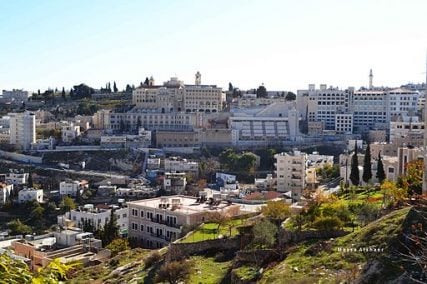 (RNS) Christmas is the one time each year when much of the world turns its gaze to Bethlehem, the West Bank town at the heart of the Gospel account of Jesus’ humble birth in a stable.

But Bethlehem may be in for a second round of global publicity in the span of a few months with the expected visit of Pope Francis in May.

In an interview earlier this month, Francis confirmed rumors that he planned to travel to the Holy Land -- probably stopping at sites in Jordan, Israel and the West Bank in the Palestinian territories -- and said preparations were underway.

Then last week the Latin patriarch of Jerusalem, the top Catholic official in the region, revealed that the visit was set for May.

Given the political and religious combustibility that attends almost any event in the Holy Land, a papal trip was bound to be fraught and a debate over the visit quickly erupted as Israeli newspapers reported that the preliminary itinerary for Francis’ pilgrimage has him spending just one full day in Israel proper -- probably arriving in Jordan on Saturday, May 24, traveling to Israel on Sunday morning, then celebrating Mass in Bethlehem on Monday before heading back to Rome.

While in Israel, he is reportedly to visit Christian holy sites in Jerusalem, the Holocaust memorial of Yad Vashem, and the Western Wall, the ruins that are all that remain of the Second Temple, which was destroyed by the Romans in the first century.

Francis and his longtime friend from his native Argentina, Rabbi Abraham Skorka, have said they hoped to pray together at the Western Wall one day “to show the world it is possible,” as Skorka recently put it.

But such a brief visit Francis would not allow the pontiff to visit sites in Galilee in northern Israel where Jesus lived most of his life and conducted his ministry, and the chief public Mass was to be a celebration in Bethlehem.

“The Palestinian Authority will be the main beneficiary, as it will gain international prominence,” one Israeli news outlet wrote. Israeli officials are reportedly still trying to convince the pope to celebrate a Mass in Israel itself and Vatican officials say on-site planning visits are ongoing.

In 2009, Pope Benedict XVI spent eight days in the area, five of them in Israel. Pope John Paul II visited the Holy land for six days in 2000, celebrating Mass in Bethlehem, Nazareth and Jerusalem.

Any papal trip to the Holy land is a diplomatic and religious obstacle course, as the Vatican wants to foster relations with Israel and other countries in the region, as well as the Jewish and Muslim communities themselves.

But the pope also wants to promote and defend the tiny Christian community in the Middle East. Christians in the region are facing almost unprecedented challenges today amid the upheavals since the Arab Spring.

Moreover, Francis wants to build bridges to the other Christian communities that have roots in the Holy Land, primarily the Eastern Orthodox.

In fact, Francis said this month that he wants to make this trip to mark the 50th anniversary of the first papal visit to the region, when Paul VI met Orthodox Patriarch Athenagoras in Jerusalem in 1964. That meeting was viewed as a landmark step in efforts to heal the nearly thousand-year schism between Eastern and Western Christianity.

Francis said that on this trip he hopes to meet the current patriarch of Constantinople, Bartholomew, “renewing that embrace.”

The pope also made it clear how much Bethlehem remains a focus of his thoughts about an eventual visit.

“Bethlehem is a precise point in the Holy Land where Jesus lived,” Francis told Andrea Tornielli of La Stampa, an Italian daily. “On Christmas night, I think above all of the Christians who live there, of those who are in difficulty, of the many people who have had to leave that land because of various problems.”

“But Bethlehem is still Bethlehem,” he said. “God arrived at a specific time in a specific land; that is where God’s tenderness and grace appeared. We cannot think of Christmas without thinking of the Holy Land.”