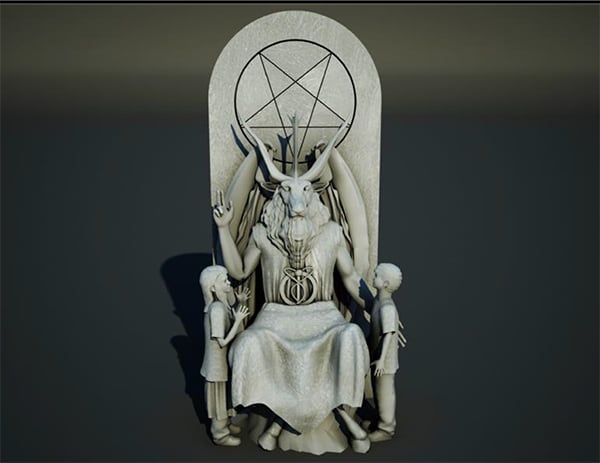 “The Satanic Temple” unveiled its proposal for a monument it intends to erect next to another religious statue: a depiction of the Ten Commandments on the Oklahoma State Capitol. Illustration courtesy of The Satanic Temple
January 7, 2014
Greg Horton

The Satanic Temple unveiled its proposal for a monument it intends to erect next to another religious statue: a depiction of the Ten Commandments on the Oklahoma State Capitol. Illustration courtesy of the Satanic Temple

Temple spokesman Lucien Greaves said he mistakenly sent the plans to the Oklahoma Capitol Preservation Commission via email, triggering their disclosure on news and social networking sites via a press release on Monday (Jan. 6).

“I didn’t mean to reach out to the media until the commission had the formal submission,” he said.

The group wants to erect the monument next to a depiction of the Ten Commandments that has been on the state grounds since 2012. Legislators opened the door to such displays when they pushed through a bill in 2009 giving permission for the Ten Commandments monument, which was paid for with private funds.

The plans show a 7-foot tall-statue of a seated Satan flanked by two children. The design includes two important Satanist symbols: the pentacle, located above Satan’s head, and the baphomet. Greaves said the goat-headed baphomet is believed to be a symbol of idolatry that the Knights Templar were accused of worshipping, and it is now part of disparate occult and mystical traditions.

“The symbol is now a constitutionally protected one that stands for the rights of heretics, for tolerance and free inquiry, and for the unjustly outcast,” Greaves said.

Final plans are not complete yet, but Greaves said the back slab would “almost certainly be granite," and the sculpture itself would be an as-yet-undetermined metal.

The commission has no deadline for approving or rejecting the application, and the panel imposed a moratorium on new displays last month after receiving a Hindu group's application for a monument.

“I’m sure the attorneys will decide the legality of the moratorium,” Greaves said, “but as long as the Ten Commandments monument remains on the Capitol grounds, we believe we have legal standing, and there is no reason for the commission not to consider our application.”