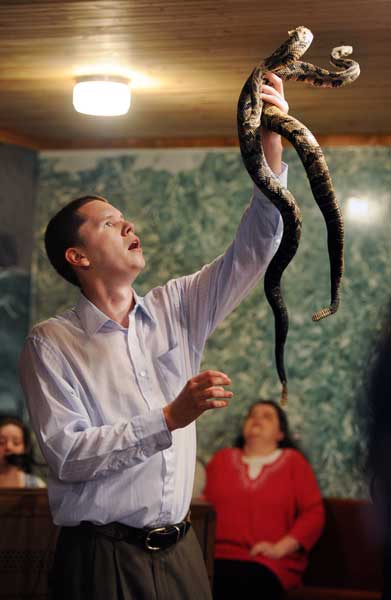 Andrew Hamblin, 21, pastor of Tabernacle Church of God in La Follette, Tenn., holds up two rattlesnakes during church service. For more than a 100 years, small Pentecostal churches in East Tennessee and other parts of Appalachia have handled poisonous snakes and drunk strychnine during their services. The snake handlers say that the Bible tells them to do so, but it’s illegal and has mostly died out. RNS photo by Shelley Mays/courtesy USA Today.
January 8, 2014
Bob Smietana 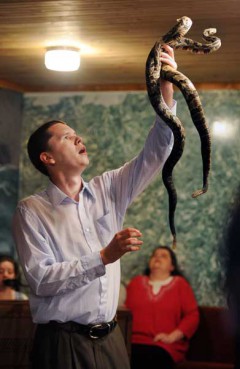 Andrew Hamblin, 21, pastor of Tabernacle Church of God in LaFollette, Tenn., holds up two rattlesnakes during a church service. For more than 100 years, small Pentecostal churches in East Tennessee and other parts of Appalachia have handled poisonous snakes and drunk strychnine during their services. The snake handlers say that the Bible tells them to do so, but it’s illegal and has mostly died out. Photo courtesy National Geographic Channels

(RNS) An East Tennessee serpent-handling pastor’s legal woes are over for now.

After a hearing on Wednesday (Jan. 8), a grand jury decided not to indict the Rev. Andrew Hamblin on charges of violating a state ban on possessing venomous snakes.

In November, state officials seized 53 serpents -- including rattlesnakes, copperheads and exotic breeds -- from the Tabernacle Church of God in LaFollette, Tenn., where Hamblin is pastor.

Hamblin and his church say the Bible commands them to handle the snakes in worship. They’ve been featured in a National Geographic television series, “Snake Salvation.”

But state law bans the possession of venomous snakes.

Officials from the Tennessee Wildlife Resources Agency cited Hamblin with 53 counts of violating the ban. Each count carried a maximum sentence of almost a year in jail.

He was thrilled by the grand jury’s decision.

“I’m ecstatic,” he said in a phone interview Wednesday. “All the headlines should read ‘Snake handlers have religious rights in Tennessee.’”

Hambin said he was allowed to address the grand jury for half an hour at the hearing. His defense was simple. The snakes weren’t his, he said. They belonged to the church, and Hamblin said the wildlife officials had no business raiding a church.

In the weeks since the raid, Hamblin and his congregation have rallied local support for their cause. They collected signatures on petitions and made their case on Facebook and other social media outlets. Dozens of their supporters crowded in the Campbell County Courthouse for previous hearings.

Since 1947, Tennessee law has banned venomous snakes during church services or public settings. The state Supreme Court upheld that ban in the 1970s.

Most of the snakes were in ill health when they were seized, said Cameron. More than half died since the raid, and the rest are being cared for at a Knoxville zoo.

That’s where they will remain, said Cameron.

“As far as returning the snakes -- that is not an option,” he said.

State officials don’t plan to take any other action toward the church or Hamblin, said Cameron.

Hamblin has said repeatedly that he would go to jail rather than give up handing serpents in church.  His church has continued to hold services with snakes on Friday nights and Sundays since the raid. Despite the publicity, National Geographic did not renew the reality-TV show for a second season.

But Hamblin was grateful to the grand jury and credited prayer and community support for its decision.

“God came by,” he said. “It’s a huge relief off our shoulders. Now we can go back to normal and not worry about being shut down.”