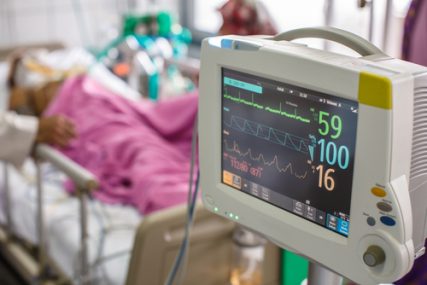 Mechanical ventilation equipment in a hospital.

(RNS) The cases of two young women — a California teen and a pregnant Texas mother — have generated sympathy for their families, but also have left some doctors and bioethicists upset about their treatment.

Many doctors are questioning continued medical procedures on a 13-year-old girl declared brain-dead nearly a month ago, calling interventions to provide nutrition to a dead body wrong and unethical.

Many people around the country also have questioned the decision of a Texas hospital to refuse to remove a pregnant woman from a ventilator, although her husband says she is brain dead. Her husband has asked for his wife to be taken off a breathing machine. The hospital, John Peter Smith Hospital in Forth Worth, has not commented publicly on her condition.

The 13-year-old, Jahi McMath, was pronounced dead by the coroner’s office, after suffering rare complications from a Dec. 9 tonsillectomy. Her parents, unwilling to disconnect Jahi from machines that keep her heart beating artificially, have transferred her from an Oakland hospital to an unnamed facility. The McMath family lawyer announced Wednesday that Jahi’s new doctors had inserted a tube in her throat and another tube to provide nutrition to her stomach.

Many people don’t understand the differences between a coma, persistent vegetative state and brain death, said Arthur Caplan, head of the division of bioethics at NYU Langone Medical Center in New York City. By moving the lungs up and down, a ventilator can “give the appearance of life,” Caplan said.

But in fact, “brain death” is no different than any other sort of death: A brain-dead person is no longer alive. The term simply describes how the death was determined, said Laurence McCullough, a professor at the Center for Medical Ethics and Health Policy at Baylor College of Medicine in Houston.

There are no ethical issues in the care of someone who is brain-dead, because the patient is now a corpse, McCullough said.

“Orders should have been immediately written to discontinue all life support,” said McCullough, who has no personal knowledge of Jahi’s case. “The family should have been allowed to spend some time with the body if they wished. And then her body should have been sent to the morgue. That is straightforward. There is no ethical debate about that.”

Both Caplan and McCullough were critical of the unnamed medical facility that agreed to put Jahi’s body on a ventilator. “What could they be thinking?” McCullough said “Their thinking must be disordered, from a medical point of view. … There is a word for this: crazy.”

“Are there some living cells in the body? Not all the cells die at once. It takes time. But her body will start to break down and decay. It’s a matter of when, not whether.”

Jahi’s new doctors are “trying to ventilate and otherwise treat a corpse,” Caplan said. “She is going to start to decompose.”

McCullough said the case of Texas mother Marlise Munoz is more complicated, because her hospital has not announced her condition. Munoz suffered an apparent blood clot in her lungs in November, when she was 14 weeks pregnant.

The woman’s husband, Erick Munoz, has said he’s been told his wife is brain-dead. In media reports, he’s said that his wife didn’t wish to be kept alive artificially and would have wanted to be taken off a ventilator.

If Munoz is alive but unconscious, McCullough says the hospital shouldn’t be blamed for taking the legally cautious approach of keeping her on life support. Texas law states that a person may not withdraw or withhold life-sustaining treatment from a pregnant patient.

If she is brain-dead, then “you have a pregnancy in a cadaver,” McCullough said. “Then the law no longer applies.” If Munoz is dead, and the hospital wishes to continue ventilation to save her fetus, that is considered a medical experiment, and should undergo careful consideration by a committee of experts, McCullough said.

“In desperate cases, you respond with very careful thought and deliberation,” said McCullough, who chairs the fetal therapy board at Texas Children’s Hospital.

Given that Munoz suffered a loss of oxygen to her brain because of the clot, the fetus may also have suffered grievous harm, as well, Caplan said. “You probably have a fetus who is terribly devastated,” Caplan said. “I do think the family’s wishes should be honored.”

At this point, Munoz’s fetus is not viable, said McCullough, noting that infants are generally not considered viable — or able to survive with full medical support — until the 24th week of a 40-week pregnancy. Caplan said the Texas legislature needs to rewrite its law, which he describes as overly broad. As it’s written, Caplan said, the law says “you can’t have a living will if you are pregnant, even one day pregnant.”

A look at some of the differences between states of consciousness and brain death:

Brain death: These patients are no longer alive. There has been an irreversible cessation of all activity in both the brain and the brain stem. Reflexes that go through the spinal cord may persist even in a brain-dead state.

Vegetative state: Patients in vegetative states are alive but also have severely impaired consciousness, although their eyes may open spontaneously. The eye opening may give the impression of consciousness, but there is no awareness of the environment. These patients do not acknowledge the examiner; they do not attend or track objects that are presented to them; their movements are non-purposeful; they do not speak.

Minimally conscious state: These patients are also alive, with a severe alteration in consciousness, with intermittent, but inconsistent, behaviors suggesting awareness. Contrary to patients in coma or a vegetative state, minimally conscious patients may occasionally have purposeful movements, and they may track motions with their eyes or speak.

Health & Lifestyle
Latest research on vegetative state calls for new civil rights movement
Opinion
A reminder why gene-edited embryos are a terrible idea
News
Mother of girl declared dead twice slams doctors at funeral
News
Charlie Gard dies after sparking a global debate on the ethics of life and death
Ethics
6 life and death questions for ethicist Arthur Caplan
© Copyright 2020, Religion News Service. All rights reserved. Use of and/or registration on any portion of this site constitutes acceptance of our User Agreement and Privacy Policy, Privacy Statement and Cookie Notice. The material on this site may not be reproduced, distributed, transmitted, cached or otherwise used, except with the prior written permission of Religion News Service.