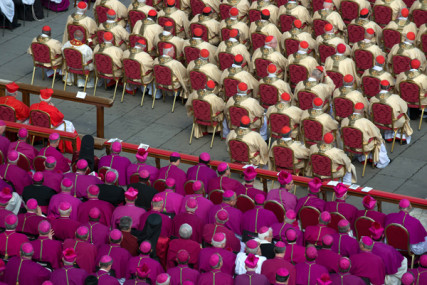 (RNS) In naming his first batch of new cardinals on Sunday (Jan. 12), Pope Francis made some surprising choices that largely confirmed the characteristics he wants in the Catholic Church he leads: a greater focus on the poor, a bigger voice for the Global South and a reduced emphasis on the traditional hierarchical perks.

True to form, Francis wrote each of the new cardinals and stressed that the new title "does not imply promotion." He asked them to refrain "from any expression of worldliness or from any form of celebration contrary to the evangelical spirit of austerity, sobriety and poverty."

Some had expected Francis to leave his mark by pushing well beyond the ceiling of 120 cardinals under the age of 80 who are eligible to vote in a conclave.

(Cardinals who turn 80 no longer have a vote, and Francis also named three cardinals 80 and older as a kind of Catholic version of a lifetime achievement award.)

Instead, he distributed 16 new red hats -- just two more than the 14 current vacancies -- to bishops in unexpected places, such as Haiti and Burkina Faso, among the world’s poorest nations, as well as South Korea and the Philippines, a second for that island nation.

Five of the new electors are from Latin America, boosting representation in the College of Cardinals from the pope’s home continent by a third, including Francis’ own successor in Buenos Aires, Archbishop Mario Poli.

Four of the new “princes of the church” will be from the Roman Curia, the papal bureaucracy that has been dogged by scandal and dysfunction in recent years, and three of them are Italian. But those three are also his hand-picked aides, and Francis shocked traditional sensibilities by declining to give red hats to the traditional “cardinalatial” sees of Venice and Turin. "Under Francis, we are in a period when old schemes of ecclesial power and authority, and promotion, are being set aside in favor of a new emphasis on pastoral care in support of the marginalized and the suffering," wrote Robert Moynihan, editor of Inside the Vatican magazine.

The pope instead will give a red hat to the archbishop of Perugia, the first cardinal for the small hilltop town in the central Umbria region of Italy since the late 1800s. The reason: Archbishop Gualtiero Bassetti has a reputation as a pastoral churchman -- “a figure said to more accurately reflect Francis' identikit of a shepherd with the ‘smell of the sheep,’” as blogger Rocco Palmo put it.

Canada will get one new cardinal -- Archbishop Gerald C. Lacroix of Quebec -- but the U.S., which has a full complement of cardinals, was shut out for the first time since John Paul II included no Americans in his first picks in 1979.

All told, 12 of the 16 new voting-age cardinals are from different countries around the world and virtually every region: two from Europe, two from North and Central America, three from South America, two from Africa, and two from Asia.

As Vatican-watcher John Thavis put it, this first round of appointments was a geographic shift “but no earthquake.” Francis did not raise the number of voting-age cardinals to dilute the influence of the Curia or Europe, nor did he name lay people as cardinals or announce a new role for the College of Cardinals.

“The fact that he chose not to make such radical changes reflects several factors,” Thavis wrote. “First, Francis probably did not want to be seen as revamping the very institution that elected him only 10 months ago. If deeper changes are needed, they can easily come later in his pontificate.

“Second, he may be convinced that a shift toward more pastoral leaders and fewer bureaucrats in the College of Cardinals is something that can be accomplished gradually. Over the next five years, he will have an opportunity to name at least 40 additional cardinals.”

Finally, Thavis said it may be that Francis doesn’t see the cardinals as the key to reforming the church.

The cardinals’ main duty for now is to elect a new pope, and Francis may want to focus on other means to promote a more collaborative church, such as calling a wider range of bishops and other church leaders together in regular synods, or meetings, in Rome to discuss challenges and changes.

Francis' picks on Sunday did signal that he not only wants pastoral leaders for the church but he also wants men who bring a moderate, less doctrinaire and less flamboyant approach to ministry -- in effect, prelates more in line with his own style. 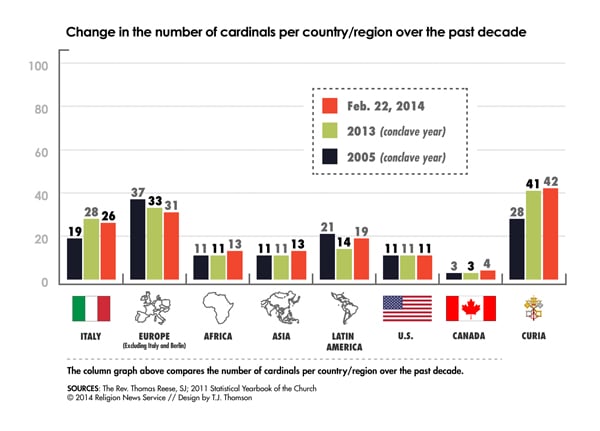 "Change in the number of cardinals per country/region over the past decade," Religion News Service graphic by T.J. Thomson

This shift in style was also seen in his decision to name British Archbishop Vincent Nichols of Westminster a cardinal and not to give a red hat to a number of eligible "culture warrior" types, such as Archbishop Andre-Joseph Leonard of Belgium or even Archbishop William Lori of Baltimore.

Also interesting were Francis’ choices among the “honorary” cardinals he named -- three men 80 or older who would not be able to vote in a conclave. Such choices are a way that popes telegraph the kind of church they hope to shape.

Among the three is 98-year-old Archbishop Loris Capovilla, a revered figure in progressive circles who was the secretary to Pope John XXIII, who died in 1963 after launching the modernizing Second Vatican Council. Francis will canonize "Good Pope John" in April.

Then again, left off the list was Dublin Archbishop Diarmuid Martin, who has been a powerful voice for combating clergy sexual abuse. Victims’ advocates lamented his absence.

But there are indications that Francis may prefer to create cardinals in small, regular batches rather than doing so every two or three years in a grand ceremony. So the next flock could be sighted sooner rather than later.

Via Catholic News Service, here is the list of the 16 new cardinal-electors in order of seniority; the last three are the cardinals over 80 who cannot vote in a conclave.