New Year’s resolutions often include a commitment to do more to help others. But as we begin 2014, the four atheists and Humanists of the pioneering Pathfinders Project—perhaps the first international service trip specifically organized for atheists and Humanists—are already reaching the halfway point of a year of service to others.

Pathfinders Project—which is sponsored by Humanist nonprofit organization Foundation Beyond Belief—was founded by Conor Robinson, who traces the origins of his desire for a dedicated year of Humanist service back to college.

While he was an undergraduate student at Yale University, Robinson launched Yale’s Humanist student group in 2008 in order to provide a safe space for nonreligious students and support interfaith dialogue on campus; he soon discovered that “service projects [were] invaluable in meeting both of those aims.”

After graduating Robinson taught special education in Los Angeles, where he became even more passionate about service work and intercultural dialogue. These experiences inspired Conor to establish Pathfinders Project.

The first Pathfinders Project trip began just under six months ago, with Robinson accompanied by Ben Blanchard, Wendy Webber, and Michelle Huey. Since then these four Humanists have been traveling the world to support clean water, education, human rights, and environmental conservation efforts in Asia, Africa, and Latin America—with the ultimate goal of working toward the creation of a permanent Humanist Service Corps.

As they approach the halfway point in their journey, I decided to check in with Robinson to learn more about what they’ve been doing, what’s to come, why he wants to create a Humanist Service Corps, how interfaith work factors into their projects, and what he hopes to see from the atheist and Humanist community in the future.

Chris Stedman: How far along into the pilot year of Pathfinders Project are you?

CS: Where have you been so far, and what have you done?

CR: We started in Cambodia, where we taught English in Bridge of Life School‘s free classes for poor Khmer children. We also taught at Kasese Humanist Primary School and Mustard Seed Secondary School in Uganda. From Uganda, we traveled to Ghana, where we worked with Alliance for African Women Initiative to promote equal access to education, healthcare, and business opportunities for women in Accra. Then we visited the Kukuo camp for alleged witches in Northern Ghana. Right now, we are building latrines with Children of the Border in La Fond-Jeannette, Haiti. Rural Haitians are still suffering from the consequences of the 2010 earthquake, and the cholera that was most likely brought in by U.N. forces in the aftermath has since killed more than 8,000 Haitians and stricken 650,000 more. Latrines are needed to stop the spread of the water-borne illness, and our project will nearly double the number of latrines Children of the Border has built to date.

CS: That’s incredible. What’s ahead for your group on this trip?

CR: From here, we will travel to Isla Puná, Ecuador, where we will help Water Ecuador build its seventh Water Center and educate the community about the importance of drinking clean water. After that, we have an environmental conservation project with Fundación Misión Gaia in Santa Marta, Colombia, and then two education projects in Guatemala City—first with Safe Passage, and then with Avivara.

CS: Aside from the actual projects that you’re all doing on this trip, what are some of your goals for Pathfinders Project?

CR: As I [already] mentioned, the main goal aside from the objectives of the projects themselves is to facilitate dialogue across religious and cultural boundaries. The work we do translates to interactions that give us a greater understanding of the people we are working to support, and allows us to connect with them more deeply than we possibly could as mere tourists. Additionally, it gives us a chance to evaluate locations and partner organizations for the launch site of the Humanist Service Corps. Of course, there are many other goals, as is true for any undertaking of this duration. Some of my overarching goals include demonstrating Humanist generosity and compassion to the religious and nonreligious alike, and drawing more atheists and Humanists into service in whatever form they are able.

CS: You mentioned your goal of establishing a Humanist Service Corps. Can you say more about that? 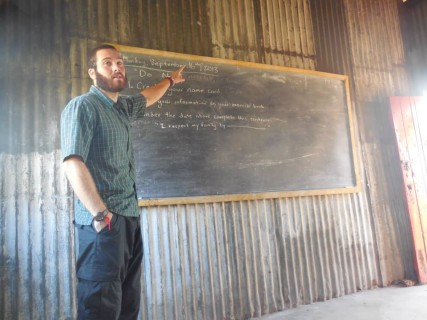 CR: Around the country and around the globe, Humanist and atheist communities are forming identities that center around doing good for the world and for humanity. The Humanist Service Corps will extend and reinforce that identity by encouraging and demonstrating the generosity and compassion of atheists and Humanists. Whether or not they choose to participate, [I hope that] atheists and Humanists will see themselves reflected in the Humanist Service Corps more accurately and positively than in most other representations of the nonreligious.

International service is not for everyone, and some people will object to the idea of doing service for any other reason than the cause itself. However, evidence suggests that the cause alone is an insufficient motivator for most people, and that rates of charitable giving and volunteering increase within communities that encourage it. Speaking from my own experience, I know that my Humanism has helped me to define my service, and that my service has deepened my Humanism. The Humanist Service Corps will help others do the same.

CR: Building relationships between Humanists and the religious is central to Pathfinders Project. It might seem otherwise, since Pathfinders Project comprises four Humanist volunteers working with ten nonreligious organizations, but remember that the underlying purpose of the service projects is to give us a context for understanding and authentically interacting with the people we support—almost all of whom are religious. Really, Pathfinders Project is a continued exploration of the idea that the principle of charity can be derived organically through shared service. That is to say, we can build mutual understanding by collaborating on common goals, and then use that understanding as a foundation for constructive dialogue. Ultimately, the aim is to fundamentally change the conversation about global good, such that participation is based on actions, not beliefs. 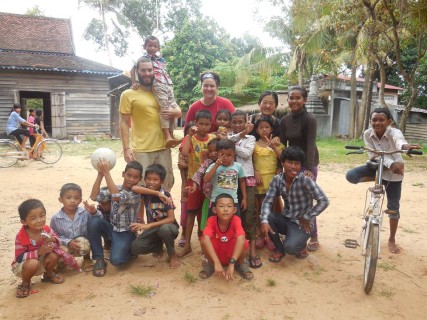 CS: What are some of the directions you’d like to see the atheist and Humanist community go in the next decade?

CR: By this point in the interview, it should come as no surprise that I want to see atheists and Humanists building and sustaining communities that encourage generosity and service. I’d like to see more Humanist chaplains on university campuses and the first Humanist chaplains in the branches of the military. I want conferences to become safe places for all people, regardless of gender or sexual orientation, and for the makeup of the speakers to reflect and encourage the growing diversity of the movement. I’d like to see atheists of all stripes interact with each other with more tolerance and compassion.

CS: How can people get involved in Pathfinders Project, or support it from afar?

CR: As I mentioned before, we are currently working with Children of the Border to build 20 latrines in the Haitian community of La Fond-Jeannette. Each latrine costs $300, which includes tools, cement, and other building materials, as well as the services of a local mason who ensures the foundation is sound. Those who are interested can help us build these latrines and stop the spread of cholera by donating and sharing the fundraiser on social media platforms. For that matter, any engagement on social media platforms helps our cause, because it spreads the stories of the amazing people and organizations we encounter in our work.