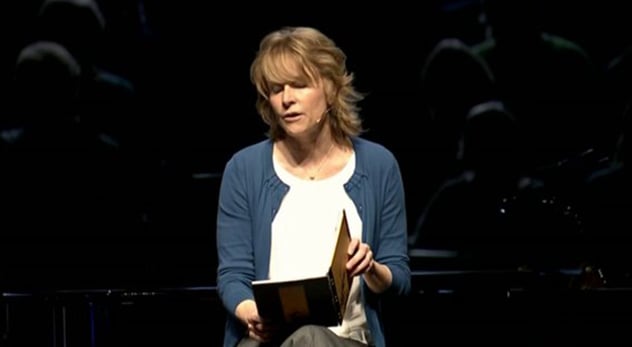 Nancy Ortberg is a prominent Christian speaker, author, and consultant who resides in California.

Nancy Ortberg's rare combination of tenacity and grace has enabled her to break through many of the barriers to female leadership in evangelicalism today. Though she is wed to bestselling author and pastor John Ortberg, she's managed never to be reduced only to her role as a "pastor's wife." Nancy served eight years as a teaching pastor at Willow Creek Community Church, one of America's largest congregations located outside of Chicago. And today, she is a consultant to businesses and non-profits, a sought after speaker, and author of such books as Unleashing the Power of Rubber Bands.

Here, she shares the secrets she's learned about leading inside and outside of the church as well as what she believes should be tattooed on everyone her age and older.

RNS: Some might say that the success of leadership is based on the ability to convince others of your vision. What's the most effective way to inspire others to follow what you believe is the right path for the future of the organization or church?

I think leadership in the New Testament is a plurality of people. We’re a church. We’re not a Chinese restaurant. We’re not the Apple Store. It’s really about helping people encounter Jesus and be changed by him. You have to get people excited about their part in it. So I think storytelling and listening—those two together—and then the question, “What’s your part in this?”

RNS: What do you do in the church world when a member opposes you and stirs up trouble among others? Unlike the corporate world, they can't just be fired. How do you try to win over these kinds of people?

NO: I always joke, “You get a sniper team out there, and take them out.” Because that would be so much easier.

First of all, you have to realize that leadership is tough. I was speaking somewhere at a conference and they came and said to me, “The topic you were to speak on, someone spoke on today.” So I sat there and thought, “What do leaders need to hear?” and I wrote a really simple talk, “Stopping The Surprise That Leadership is Hard.” Leadership is just hard work.

There will always be people who oppose you. So, I think a couple things. I think the first one is that you have to have the big boy and girl panties on to separate the way that they said it and what they said.

So, a phrase that a mentor of mine taught me, “I will prayerfully consider what you said to me.” And to really mean it.  That’s not an avoidance technique. And then to have the conversation, “You know, the way that you said that to me…put me off, I think. But let’s not start there. Let’s start with the issue. Let me hear more about it. You’re telling me you feel this. Then let me talk. Let’s talk about the issue and then we can get back to the way it was said.” It’s really discipleship.

A leader in our church, who leads one of our larger campuses, has gotten some rough emails. Actually had one guy come up to him and said, “I will never forgive you for what you did.” And I loved our leader’s response. It was firm but gracious. He kind of chuckled, and he put his arm on the guy’s shoulder, and shook his head and said, “You don’t mean that. You just don’t mean that. I think you are frustrated. I think you feel out of the loop. But you said it really poorly. And we’re going to come back in a minute and talk about the way you said it, but first let’s hear what you disagree with. And then if you give me the same amount of time I’d like to explain to you why I did what I did.”

RNS: How do you respond to nasty emails?

NO: I have learned to use that phrase, “I will prayerfully consider what you said.” And then I usually set up a time to talk. I try to get off email as quickly as possible with that kind of stuff. Things come out of me when I’m anonymous, or protected, that I’m not proud of. That’s just true of all of us.

I would say, “I’m going to prayerfully consider what you’ve said. I feel like you’ve jumped to some conclusions before you’ve even had a chance to hear my side, but I am more than willing, I think we should sit down and talk about this.” And I will spend time face to face. And I will do it a couple of times and then, if I’m getting nowhere, I will bring a third person in. You can’t let your idea of what the outcome will be prevent you from having that first, second, third conversation.

Leadership is a real tedious endeavor. Efficiency is not leadership.

RNS: You've had success in both the corporate and church worlds. Which corporate business principles are helpful in the church world and which are potentially damaging?

Sometimes we end up compartmentalizing the very thing that we don’t want to compartmentalize for our attenders at church. Leadership can happen anywhere. So when you’re honoring people, you’re honoring process, you’re making decisions that everybody agrees with, that is very honoring and there are examples in Scripture of that all over the place.

RNS: My dad, a pastor, has often told me he would rather retire a year early than a day late. How do you know it's the right time to let go and move on?

NO: First of all, what a great quote. That should be tattooed on everybody my age and older.  I don’t have a formulaic answer for you. When you come alongside and start mentoring the younger generation, you know that will be one clue it’s time to go. And something else that’s not necessarily a truth, but a clue: I can guarantee that when we go, God’s got something just as exciting ahead of us. You may not be able to see it yet, but it all counts for his kingdom. So don’t worry about being marginalized, or out of the league—you’ll still be in the game.

And then I think, over time, when you’ve really built a team that starts taking the organization to the next level, with less and less of your input, that’s just nothing but a great sign that you can step away or do something else. We step aside and make room for young leaders, but that doesn’t mean that we have to stop being engaged fully in the work of the kingdom.

>>WATCH: Nancy shares how Jesus' ability to teach made him a person of great influence<<