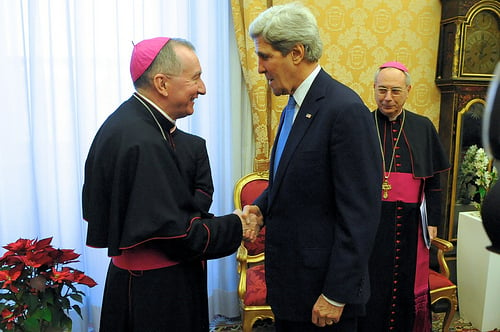 ROME (RNS) U.S. Secretary of State John Kerry met with his Vatican counterpart for more than 90 minutes Tuesday (Jan. 14), discussing the Syrian civil war and the negotiations between Israel and Palestinians, and hinted that President Barack Obama hopes to meet with Pope Francis in the coming months.

Kerry did not meet with the pope, but rather with Archbishop Pietro Parolin, the Vatican's secretary of state. Kerry called the meeting "as comprehensive a conversation as I've had with any secretary of state or foreign minister in the course of my tenure."

A short release from the Holy See indicated the two men also discussed health care reform, which has sparked intense opposition from American bishops who oppose an employer mandate to provide free contraceptive services as part of health insurance coverage.

Kerry came to Rome from Paris, where he was attending talks on the Syria crisis; a statement from his office said Kerry and Parolin talked "at great length" about the topic. In September, Francis took a strong stand against a U.S.-led invasion of the war-torn country, telling a crowd of more than 100,000 in St. Peter's Square that "violence and war are never the way to peace." Francis also issued a statement Monday (Jan. 13) in support of the current negotiation process.

Kerry also said he discussed the "common interest of Pope Francis and President Obama in addressing poverty and extreme poverty on a global basis." Kerry said Francis and Obama were likely to meet. Under typical diplomatic protocol, foreign ministers will meet before two heads of state have a formal visit.

"I know that the Holy Father is anticipating the visit of President Obama here, and the president is looking forward to coming here to meet him," Kerry stated.

Kerry is the first Roman Catholic secretary of state since Edmund Muskie, who served under President Jimmy Carter.