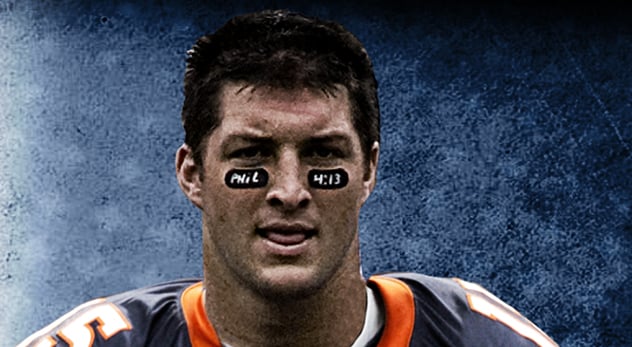 Tim Tebow is one of many famous Christians to use Philippians 4:13 as an inspiration for winning. – Image courtesy of StefanRalle (http://bit.ly/1kEozPJ)

On July 27, 2009, the cover of “Sports Illustrated” featured an arresting image of Florida Gators quarterback Tim Tebow. The headline—“Tim Tebow: Man of Many Missions”—riffed on the way he’d created a fan frenzy with his unique blend of faith and football. The championship quarterback seemed poised to jump off the glossy cover with pursed lips that oozed determination and a simple Bible verse scribbled within the black grease underneath his eyes: “Phil. 4:13.”

Tebow’s highly churched Southern fan base didn’t need to look up the passage. No, most of them knew it by heart: “I can do all things through Christ who strengthens me.”

Philippians 4:13 is one of the most popular verses in any of the 66 books of the Christian Bible, having been printed on millions of key chains and t-shirts, cellphone cases and coffee mugs. (If one wanted to argue the trinketization of Christianity, this Bible verse would be a good starting point.)

But it also one of the misunderstood, misused, and misinterpreted.

Like Tebow, Philippians 4:13 functions as a kind of mystical incantation for many Christians. They recite the passage when they need to draw power from another place to defeat an enemy or conquer a difficult task. It’s a talisman like Green Lantern’s ring or He-Man’s sword.

Need an example? Joel Osteen, pastor of the largest evangelical mega-church in America provided the following commentary on Philippians 4:13 in the January 21, 2013 edition of his “Today’s Word” devotional:

I’m not trying to use Joel Osteen as a punching bag—surely enough Christian commentators have already done enough of that—but rather using him as an example of the way many Christians today understand and interpret this verse. For them, the “all things” that Christ empowers them to accomplish includes fulfilling their dreams, climbing to new heights, and embracing their destinies.

Do you want that job promotion? To find your soul mate? Have better sex with your spouse? Make more money?  No problem. You can accomplish “all things through Christ.”

Unfortunately, this way of interpreting and applying Philippians 4:13 couldn’t be further from its actual meaning. To understand what Paul, the author of Philippians, actually meant, we have to read the verse in context.

Philippians is one of the “prison epistles,” which is to say, it was written during one of the many times Paul was a jailbird. So it isn’t surprising that the book draws heavily on the themes of humility and self-sacrifice. When you imagine Paul penning this letter in a dank first-century prison cell—not exactly the new heights and destiny imagined above—you already begin to feel uncomfortable about popular interpretations.

But more than the setting, we must recognize that Philippians 4:13 is part of a larger idea. When we look at verses 11 and 12, the thought begins to take shape:

As Dr. Eric Bargerhuff writes in The Most Misused Verses in the Bible, “[Philippians 4:13 is] not really about who has the strength to play to the best of their abilities in a sporting contest…. This verse is about having strength to be content when we are facing those moments in life when physical resources are minimal.”

Contrary to popular belief, the Bible does not teach “God will give you the strength to do whatever you set your mind to.” (Actually, anytime a foundational view in your theology begins with, “God will give you”, stop and do a double-check.) [tweetable]God is not a heavenly bellhop or divine sugar daddy or cosmic power plant to fuel your dream-quest.[/tweetable] Instead, the Bible teaches, God is a sustainer when life feels unsustainable.

And if you’re like me, this is a “good news” message. Because my experience is that life is messy and thorny and unpredictable and chock full of disappointments. Most of them, a result of my own doing. I don’t need a God who motivates me to pursue my career dreams or chase down opportunities for personal advancement. I possess that drive on my own. Instead, I need a God who hunkers down in life’s trenches with me, who isn’t afraid to get mucky and messy and wade with me through tragedy and pain and failure.

The God of the Bible—Jesus—is better than we’ve imagined because he gives us what we actually need: strength to survive our moments of weakness and a sense of freedom even in life’s prisons.

Go write that under your eyes.

Opinion
Faith and true crime: The morals of writing about seekers and grisly deaths
Follow us on Facebook!
Submit your photos to RNS