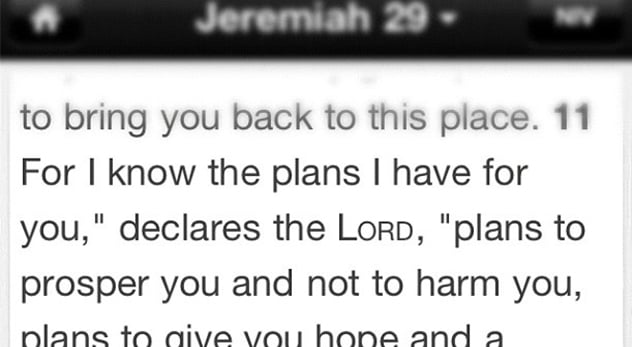 The famous verse is a favorite among graduation gift givers, but it is almost always misunderstood. – Image courtesy of Downbiggin (http://bit.ly/1bIUnhq)

Three weeks before I graduated from high school, the gifts began pouring in. I got a wad of cash, which elated me, and also a pile of presents I wasn’t sure what to do with. What exactly is an 18-year-old college freshman supposed to do with a Mont Blanc pen? Your guess is as good as mine.

One gift I’ll never forget, though, is a framed print of a famous verse that is a favorite among graduation-gift-givers:

“For I know the plans I have for you,” declares the Lord, “plans to prosper you and not to harm you, plans to give you a hope and a future.”

At the time, it seemed too good to be true, but I “claimed it” because I wanted it to be so. After college, however, I began to travel to developing nations and witness Christians stuck in dire situations. My preconceptions eroded. Does God have plans to “prosper” and “not to harm” that Sudanese refugee boy with the dazzling brown eyes or the Indian woman who was always within earshot of her “owner”? Maybe only wealthy white Westerners got a slice of God’s good plans?

My preconceptions broke down further when I began to think about the scope. Sure, God had a plan for which career I needed to pursue, but did God have a preference if I spent my summer acquiring extra course credit at a community college back home as opposed to going on a month-long mission trip to South America? And what of the minutia? Did God care whether I ate steamed broccoli or Ramen noodles while cramming for that test? The ministers I asked usually offered a vague affirmation of God’s sovereignty and then changed the subject. So I let it go.

In recent years, though, my mind has returned to that framed print that is probably tucked away in my parent’s basement, and I’ve seen it in a new light.

It begins with context, something Western readers often ignore when reading scripture (or they assume that the context from which the author writes is similar to their own). The context of Jeremiah 29 is undisputed among scholars. The prophet is writing to the inhabitants of Jerusalem who were about to be conquered by the Babylonians. They were about to have their tickets punched for a one-way trip to either slaughter or slavery. God had delivered the Israelites from disaster before, and some wondered whether God would swoop in and save them again.

Jeremiah is sent in, not with a placard of encouragement for hanging on their walls, but with incontrovertibly terrible news. He tells them that there will be no divine rescue mission. The worst-case scenario is about to become reality. And yet, Jeremiah says, God has plans ultimately to prosper his people.

At this point, I want to pause: “Aha! You see, it means what I thought it did. God is going to prosper me in the end!”

But I return to the context.

The Babylonians enter Jerusalem, capture the inhabitants, and burn the city to the ground. They kill King Zedekiah’s sons while the monarch watches before putting out his eyes and enslaving him. The generation that first heard the promise of Jeremiah is forced to endure all manner of terrible things, as is the generation after them.

Unfortunately, the verse’s context makes it sort of difficult to say, “God has plans to prosper you and not to harm you, Jonathan. Just claim Jeremiah 29:11.” Unless of course, I also admit that these plans for prospering me might include slavery, exile, and the untimely gouging of my eyes after witnessing the death of my family. Or that the plans won’t be realized for generations.

So how do we make sense of this verse? 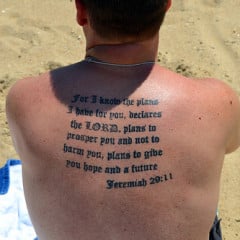 Sunbather with Jeremiah 29:11 tattooed on his back. – Image courtesy of Tobyotter (http://bit.ly/15Wrz1x)

First, we have to carefully avoid the trap so common among American Christians, which is to assume that the Bible is always about me. To be fair, Americans have gravitated toward this kind of self-centered individualistic impulse for generations. It was fertilized through early American immigrants journeying to the New World, gestated by baby boomers who raced toward job promotions and gold watches, and is now being birthed through the materialistic, anthem-singing “generation me” of which I am a part.

When I read, it is easy to unconsciously assume that Jeremiah’s you is, well, me. But in fact, Jeremiah’s verse is not written to a me; it is written to a we. It is not a promise by God to prosper the individuals in the audience but to prosper the community over the course of history. (I’d like to pause here to apologize to those of you who’ve had this verse tattooed across your rib cage.)

Of course, admitting that Jeremiah’s promise was intended for another audience doesn’t mean that it is irrelevant to our lives. Just because a verse doesn’t speak directly to me doesn’t mean it doesn’t have something to tell us.

In the Old Testament, “God’s will” describes a plan for God’s people. It is less about prospering a person who follows God and more about prospering the community of God as a whole. So a better modern application for this verse might be:

“God has always worked to prosper God’s people and God always will. Just as God worked in history to preserve Israel, so he is now working to preserve the Church. Though God’s Church will undoubtedly face challenges and often be co-opted into the unholy agendas of governments and politicians and false teachers, and though the individual parts of the whole may experience the terrible effects of a sin-stained world, God remains committed to seeing that beautiful body of Christ through to the end.”

I’ve begun to think that maybe we have mis-imagined God’s will to be a series of intricately marked out roadmaps, personalized for each journeyer with pushpins stabbed into specific waypoints. Could it be that God’s will is bigger and broader and profounder and more majestic than we assume? Maybe it describes the way God goes before the Church and pulls us into new realities.

This would be good news for all of us who languish over individual decisions about whether to be a doctor or a mechanic or if we should move to Wyoming or Nebraska. We know that God intends for the individual parts of the whole Church to be instruments of justice and mercy and compassion and grace and to help proclaim the good news to the nations. This can be fulfilled on a multiplicity of paths, not just one. So maybe when we make these decisions, we’re faced with a beautiful both/and rather than a rigid either/or, wherein God’s plans are not thwarted by our choice.

I don’t claim to have plumbed the depths of God’s will and how it all works. But one thing I do know, when it comes to Jeremiah 29:11, it’s not about me and it’s not about you. And yet it still speaks truth. Because it reminds us that God has gone out ahead of the Bride to call her forward. And It still bleeds hope. Because it whispers that God has not forgotten his people and God never will.

>>RELATED: Misreading Scripture with Western Eyes was listed in my article, “Top 10 religious books I’ve read in the last 10 years”.<<