(RNS) Susilo Bambang Yudhoyono may be the first Indonesian president to acknowledge publicly he believes in witchcraft. In a recently published memoir, he describes a “horror movie” style encounter with black magic at his residence. 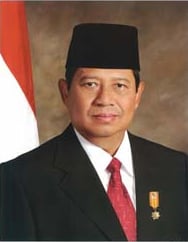 Susilo Bambang Yudhoyono may be the first Indonesian president to acknowledge publicly he believes in witchcraft.

“Suddenly, my wife screamed,” writes Yudhoyono in the 900-page book, “Selalu Ada Pilihan” (There is Always a Choice). “There was this thick dark cloud hovering beneath the ceiling, trying to enter my bedroom. I then asked everybody to pray to seek Allah’s help. I closed the door to my room but left others wide open. The revolving clouds eventually headed out of my house.”

Witchcraft is prohibited in Islam. However, the practice is widespread in Indonesia, which has the world’s largest Muslim population. A 2012 survey by the Pew Forum showed that 69 percent of Indonesian Muslims believe witchcraft is real.

“Many people in Indonesia, including its top leaders, turn to soothsayers to consult about their careers, fortunes and marriages,” said Endy Bayuni, senior editor at The Jakarta Post.

However, a president sharing this information publicly is unprecedented, Bayuni added. Yudhoyono’s second — and last — presidential term is ending this year.

Yudhoyono lives in his private residence, not at the 19th-century presidential palace in Jakarta, which is considered haunted, Bayuni said. Only two presidents, Sukarno from 1945-1965 and Abdurrahman Wahid from 1999-2001, made the palace their residence.

In September 2010, Yudhoyono skipped a meeting of the U.S. and the Association of Southeast Asian Nations held on the sidelines of the U.N. General Assembly in New York, partly because of “rumors of rampant witchcraft in the palace,” according to a WikiLeaks cable.

Yudhoyono believes in witchcraft, but perhaps only as a menace. His government last year proposed amendments to the 1918 Criminal Code, adding a clause that states using black magic to cause “someone’s illness, death, mental or physical suffering” is an offense with a punishment of up to five years in jail or 300 million rupiah ($25,000) in fines.