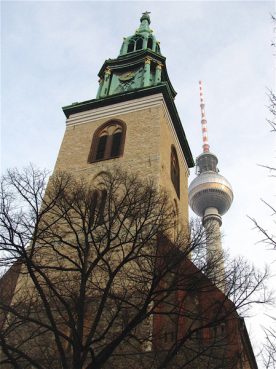 At St. Mary’s Church, near Berlin’s bustling Alexanderplatz, an evangelical pastor, a rabbi and an imam have conducted interfaith services on special occasions for the past two years. RNS photo by Melanie Sevcenko

BERLIN (RNS) At a church near Berlin’s bustling Alexanderplatz, an evangelical pastor, a rabbi and an imam have conducted interfaith services on special occasions for the past two years. Now they plan to build a multifaith prayer building.

Billed as a landmark Jewish-Muslim-Christian prayer space, the building will combine a church, a synagogue and a mosque under one roof, next to one of Berlin’s busiest streets. Its organizers hope to make the German capital a meeting ground of world cultures and international relationships.

“Berlin is a multi-faceted city,” said Kandir Sanci, the imam of the House of Prayer and Learning, the association behind the project. “You find many people of all kinds of religions. I feel that the city is very engaged to support the various religions and make them feel at home.”

In a few months, the House of Prayer and Learning will launch a crowdsourcing campaign with a goal of raising an estimated 30 million euro, about $40 million.

Anna Poeschel, spokeswoman for the Evangelical Church Association of St. Peter’s-St. Mary’s, one of the project’s partners, said the campaign is scheduled to start in May.

Architectural plans are already in place. Architect Wilfried Kuehn was awarded the prize in a design competition two years ago.

“The main focus for us was each of the religions have their own space and are not fused into one,” he said.

Kuehn’s winning design includes no church towers or minarets. There are three separate religious spaces joined by one central hall, which the architect suggests could function as the democratic heart of a community.

“We didn’t want to load any symbolism on the building,” said Kuehn. “From the outside it’s very pure and simple, almost archaic looking.” 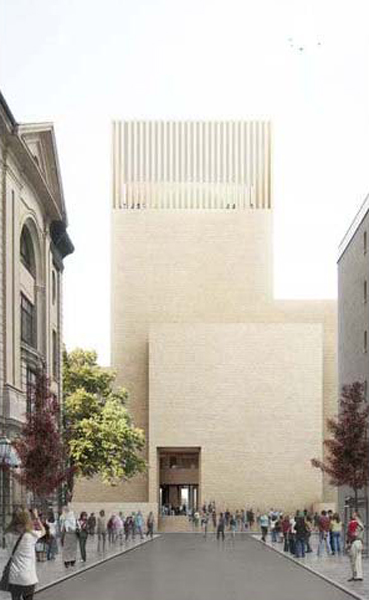 An illustration of the new building that will house interfaith services. Photo courtesy of © Kuehn Malvezzi / Davide Abbonacci

Birgit Meyer, professor of religious studies at Utrecht University in the Netherlands, said what is most compelling about the project is the neutral secular space in the middle, which she sees as a basis for the mutual acceptance.

“Obviously, this is a modern, programmatic vision about religion in the 21st century,” said Meyer. “Clearly, not all religious groups in the spectrum of Christianity, Judaism and Islam in Berlin would endorse this view, and wish to be part of the project.”

The Rev. Gregor Hohberg, minister at the Evangelical Church Association of St. Peter’s-St. Mary’s, initiated the project along with the Jewish Community of Berlin, the Abraham Geiger College of Potsdam, and the Forum for Intercultural Dialogue.

The location of the new prayer building is planned for Petriplatz on the ruins of the 13th-century St. Peter’s Church — property that is owned by the Evangelical Church Association of St. Peter’s-St. Mary’s.

During World War II, St. Peter’s Church was damaged beyond repair and eventually demolished by the East German government. For decades Petriplatz lay as a desolate parking lot, until 2007 when archeological excavations revealed the submerged remains of Coelln, the sister town of Old Berlin and one of five cities united in 1709 by Frederick I of Prussia to serve as a capital city.

Today Petriplatz is little more than a stretch of fenced-in shrubs, but Hohberg said the group has been given a unique opportunity to breathe new life into the city’s medieval origins.

Some have criticized the site of the new prayer space. During the war, St. Peter’s Church hosted one of the most radical Nazi pastors in Berlin.

While serving as an army chaplain, Walter Hoff led hundreds of Eastern European Jews to their deaths. Critics say the House of Prayer and Learning is not doing enough to remember the site’s significant role in the Holocaust.

“How can there be a dialogue of honestly amongst these three religions when the one religion who is hosting isn’t being honest about its own past?” asked Susannah Heschel, professor of Jewish Studies at Dartmouth College and a scholar of Christian and Jewish relations in Germany during the 19th and 20th centuries.

The site’s connection to Hoff needs to be clearly identified in the new prayer space, as well as in its promotional literature and educational programming, Heschel said.

Poeschel, the church spokeswoman, said an exhibition at the House of Prayer and Learning will address religious coexistence in Berlin — as well as the site’s historical connection to the Third Reich.

“They’re actually asking how we can address the nonreligious people, the secular world,” said Kuehn. “How can we address the people who do not go to church, do not pray, do not go to synagogue — but maybe are interested in the question of faith and community.”

News
As rabbi was held hostage, interfaith colleagues gathered to help end the standoff
Follow us on Facebook!
Submit your photos to RNS