WASHINGTON (RNS) The ongoing debate about the state of religious freedom in the United States is riddled with distortion and half-truths. There is certainly an important debate to be had, but sadly it’s not the one we hear much about.

Much of the current debate centers on the requirement for insurance coverage under the Affordable Care Act, which adds a second flashpoint to the mix: reproductive rights. The question that we really need to answer is this: Whose religious freedom are we talking about?

Some, including the U.S. Conference of Catholic Bishops, would have us believe that the only voices that matter are theirs. But there are 75 million Catholic voices in the U.S. today, and the bishops represent only 300 of them. We need to take into account the freedom of all employees, no matter where they work, to exercise their personal beliefs without the bishops imposing theirs upon them.

Our overarching concern is the protection of both individual rights in health care decisions and individual religious liberty from institutional intrusion. The bishops are right that the debate is about religious liberty and contraception, but their end goal is clear: Having failed to persuade Catholics in the pews to follow their ban on contraception, they are attempting to use the legislative and judicial processes to eliminate access for as many people as possible.

Let’s set the record straight on a few issues.

The religious freedom enshrined in our Constitution has two sides, freedom of religion and freedom from religion. Too often, we hear about the first part, and the second part is ignored. They are both equally important.

Individuals have consciences, they have health care needs and they have religious liberty. They deserve to have these rights and needs respected and protected. Institutions, however, do not. The constant bleating about institutions having their conscience violated by the contraceptive mandate is a bogus argument.

Some argue that schools, hospitals or any places of employment, faith-based or not, have a “conscience” and “freedom of religion.” They do not. According to my Catholic tradition, individuals have consciences and deserve to exercise them without coercion. Institutions — both secular and “religious institutions,” as well as “religious organizations” — do not have the right to claim “consciences” in order to trample on the conscience rights that properly belong to their employees.

I recognize and support the right of individual medical professionals to decline to provide services they consider immoral. When they refuse to provide services, they should provide simple and local referrals for the same services so that the health, conscience and rights of the patient are not denied. However, it goes too far to grant such refusal rights to an entire institution — such as a hospital or managed-care provider — or, for that matter, to allow blanket exclusions of coverage for certain health care services.

The bishops would like to grant these exclusion rights to all institutions — as a top adviser to the USCCB has said, they will not rest until the owner of a Taco Bell franchise can refuse coverage to his or her employees. This is not in keeping with our Catholic understanding of conscience.

Contrary to many claims, the new regulations require coverage of all FDA-approved methods of contraception, but they do not require coverage of abortion medications, such as RU-486. Emergency contraception, such as Ella or Plan B, does not terminate existing pregnancies — it prevents a pregnancy from occurring. Hence, it is a contraceptive, not something akin to abortion as some would have you believe. The bishops themselves have acknowledged that the provision and use of emergency contraception in Catholic-sponsored hospitals is permissible, particularly for victims of sexual assault.

The majority of Catholics support equal access to the full range of contraceptive services and oppose policies that impede upon that access, including access to emergency contraception. Two-thirds of Catholics (65 percent) believe that clinics and hospitals that take taxpayer money should not be allowed to refuse to provide procedures or medications based on religious beliefs. A similar number, 63 percent, also believes that health insurance should cover contraception.

A strong majority (78 percent) of Catholic women prefer that their hospital offer emergency contraception for rape victims, while more than half (57 percent) want their hospital to provide it in broader circumstances. That’s not surprising: According to 2010 data from the National Survey of Family Growth, 99 percent of sexually active Catholic women have used a modern method of birth control, the same as the population at large.

Institutions affiliated with the Catholic Church, including hospitals and universities, have provided contraception to their employees without having to shutter their doors. Catholic Healthcare West (now Dignity Health), which operates health care facilities in California and Arizona, has been providing contraceptive coverage to its employees since 1997 — two years before the state of California passed legislation requiring employers to cover contraception and well before the California Supreme Court required institutions such as Catholic Charities to do so.

Already, too many religious employers are allowed to completely deny contraceptive coverage to their employees. A workaround from the Obama administration:

But even that isn’t enough for the bishops. 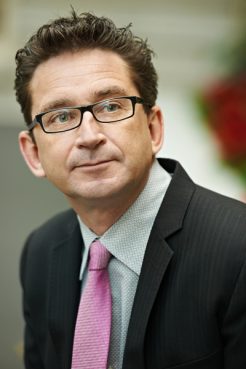 Perhaps Jon Stewart put it best when he concluded a recent segment on this matter with the words, “Just because someone works for you doesn’t mean you can control their personal lives.” That extends to employees of a comedy show as well as the bishops conference.

(Jon O’Brien is the president of Catholics for Choice, an independent Washington-based group that supports abortion rights and reproductive freedom.)