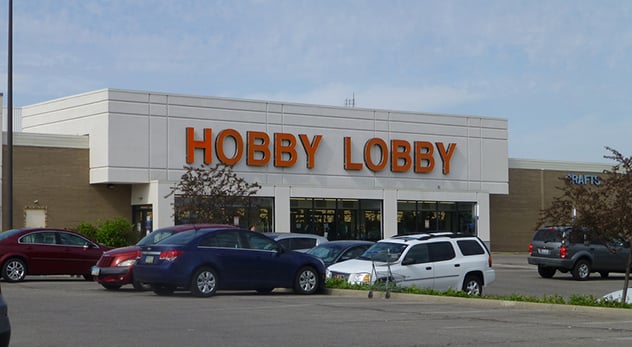 A Hobby Lobby in Mansfield, Ohio is one of 588 stores owned by Christian owner David Green. – Image courtesy of Nicholas Eckhart (http://www.flickr.com/photos/fanofretail/8779331898/sizes/l/)

A group of influential Christian theologians and pastors announced on Wednesday their support of businesses like Hobby Lobby who are fighting against  the HHS contraception mandate. In a 46-page amicus brief filed with the Supreme Court of the United States (SCOTUS), they argued that the mandate violates the First Amendment rights of Christians who believe that all work is sacred.

The brief argues that Christian doctrine requires that faith govern every aspect of a believer’s life, including their God-ordained vocation. Because Christian doctrine prohibits “the enabling, authorizing, or aiding of another” in sinful activities, the document argues, Christian employers and employees should not be required to pay for or provide contraception that includes abortion-causing drugs.

Daniel Akin, president of Southeastern Baptist Theological Seminary, a school with five faculty members listed in support, is concerned that employers are going to be forced by the government to provide medical services “that they have good reason to find morally unconscionable.” Akin told me he believes that the contraception mandate is just another flaw in Obamacare, but he thinks the stakes are much higher than that.

“Sadly, over the years, the Christian faith has been targeted by a rabid secularization and evicted from any or all public expression. The encroachment upon our civil liberties is frightening and we ought to take a stand.”

He added, “That this threat is happening in America, whose very values were emergent from a Judeo-Christian backdrop and the sacredness of belief in the transcendent, is lamentable.”

Eric Teetsel, director of Manhattan Declaration and a signatory to the brief, added that he believes the hundreds of thousands of Christians who’ve signed in support of his organization’s work are also concerned about the moral implications of the HHS mandate.

“This diverse array of groups holds in common one conviction: that the religious principles that guide every aspect of their lives – including their work – prohibit them from complying with the rule,” Teetsel said. “We hope [the brief] provides the justices an understanding of the essential religious nature of work for many faiths, including Christianity.”

When asked if he thought the brief would influence the Supreme Court on the matter, he told me he was optimistic.

“In some recent rulings the Court has deferred to faith-based claims,” Teetsel said.

Religion News Service reached out to pastor Rick Warren, who rarely gets involved in overtly political activism, regarding his involvement. Requests for comment were not immediately returned.

These Christians aren’t the only ones trying to influence the Supreme Court on the matter. On Tuesday, 19 Democratic Senators announced they were filing an amicus brief in support of the Affordable Care Act’s contraception mandate. The legislators argued that religious liberty exemptions shouldn’t apply to for-profit companies and called Hobby Lobby’s lawsuit a “gross misapplication” of the law.

The U.S. Court of Appeals for the 10th Circuit ruled in favor of Hobby Lobby in June 2013, shielding the organization and its openly Christian founder from providing insurance plans that include the contraception provision as mandated by the law. The question now is whether the Supreme Court will be similarly swayed when it hears the craft store’s case on March 25.

No matter how the high court rules, you can bet this won’t be the last public skirmish over what religious liberty means and to whom it should apply.