PARIS (RNS) By any standard, David Tibi is a French success story. 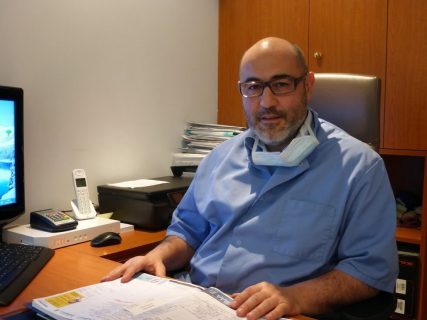 David Tibi, 44-year-old dentist and father of five, at his office in a Paris suburb. RNS photo by Lisa Bryant

The 44-year-old dentist and father of five has a thriving practice and a house in the affluent Paris suburb of Vincennes. His wife is a doctor and he is a leading member of the Jewish community and holds a senior post in its Central Consistory of Paris.

But in early July, the Tibi family will pack their bags and join the thousands of Jews now leaving France. The house has been sold. A colleague will be handling the dental practice. The family is leaving on a one-way ticket to Israel.

“If my children are to live their full Jewish identity, their future is in Israel and not in France,” Tibi said during an interview at his office in northeastern Paris, an area packed with kosher stores and restaurants. “Many Jews feel this way. There’s a massive desire to leave.”

Worldwide, immigration to Israel has stagnated and even declined. But French Jews are bucking the trend. Last year, a record 3,270 French Jews made aliyah — or immigration to Israel — a 63 percent hike from 2012. The Jewish Agency, which promotes aliyah internationally, estimates that figure could spike to 5,000 as early as this year, dramatically changing the face of Israeli immigration as well as France’s own Jewish community, the largest in Western Europe.

“For Jews today, Israel allows them to reinforce their Jewish identity,” said Ariel Kandel, who made his own aliyah from France 20 years ago and now directs the Jewish Agency in France.

A mix of factors are driving the exodus, Kandel and others say, from historical and sentimental ties — many of France’s majority Sephardic population have family in Israel — to economic ones. In January, French unemployment rose to a record 11 percent. Israel’s, by contrast, hovers at about 6 percent.

But rising anti-Semitism may be the strongest driver, manifest not only through rhetoric but also action. In 2012, a radical Islamist gunned down four people at a Jewish school in Toulouse. 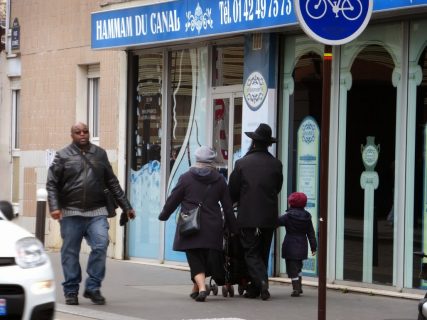 A Jewish family walks down a street in northeastern Paris, near where David Tibi works. RNS photo by Elizabeth Bryant

More recently, two of Tibi’s children were taunted on a tram. Tibi filled out immigration papers three weeks ago, making good on a project he had contemplated for years.

“My son is always asking me why there are police in front of his Jewish school, why we need to be searched each time we go to the synagogue,” he said. “We are raising our children to live with this fear.”

What troubles Tibi most is the lack of response on the part of the French.

“Once we had one million French on the streets against anti-Semitism. Now we have three million on Facebook and Twitter who are supporting Dieudonne,” he said, referring to a controversial French comic who is known for his anti-Jewish discourse.

The Tibis have already found an apartment in the Tel Aviv suburb of Ra’anana. They have picked out schools for their children. They will have to learn Hebrew, but they will hardly feel lonely. Half a dozen other French families are flying out with them. Other friends and family live near Tel Aviv. And in his new home, Tibi said, roughly 8 percent of the population is French.

“If you go to a restaurant, they’ll hand you a menu in French,” he said. “The (Israeli) administration gives you documents in French. We had the waves of aliyahs from Ethiopia and Russia. Now it’s the aliyah of French Jews.”

The Israeli government is facilitating the French aliyah in other ways. There are draft measures to recognize French diplomas and other qualifications. At the Jewish Agency’s Paris office, brochures offer information about youth programs to Israel that attract roughly 1,000 French Jews each year. Every week, another 300 Jews attend the agency’s informational meetings about Israel, Kandel, the director, said. 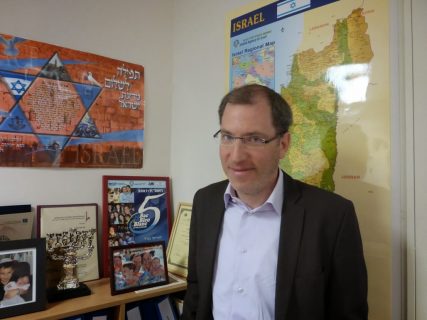 “That means you have about 30,000 Jews who are thinking about moving to Israel in the next two years,” he said. “We’re not knocking on people’s doors. But if people want to, or hope to, or think of leaving, the state of Israel must be capable of delivering.”

What Israel delivers does not suit everyone. There are no statistics of Jews returning here, but some have a hard time adjusting and finding jobs in Israel.

Children of immigrants are required to serve in the military where conscription is mandatory for both young men and women. And then there’s the ongoing existential threats from Palestinians and hostile Arab neighbors.

A poster in Kandel’s office states: “We did not promise you a rose garden.”

Others strongly believe their roots remain in France.

“For a lot of people, being connected to Israel and having a Zionist commitment just expresses itself in going to Israel on vacation,” said Sacha Reingewirtz, president of the French Union of Jewish Students. “We’re not looking at a massive exodus.”

Paris Orthodox Rabbi Mendel Azimov is also unfazed by the departures. “I can’t say this is a general community alert,” he said. “There are half a million Jews in France and I don’t see everybody moving out.”

But Tibi, who is president of the Paris-area Jewish community, is watching the departures and listening to the talk. “It’s a snowball effect,” he said, predicting the exodus may reach 8,000 Jews a year.

The fallout is already evident, he added. Students are leaving Jewish schools. The community is searching for new leaders and reconsidering costly construction projects.

Tibi is feeling the loss in other ways. “I was born in France. I did my studies in France. I am extremely sad to leave a country that gave me a lot,” he said. “But sometimes even when you love, you have to leave.”

News
3 dead in attack at French church; country on high alert
Opinion
55 years ago, a cardinal’s ‘special reverence’ for the Jews redeemed ‘Nostra Aetate’
Martini Judaism
‘Borat’ is dead serious
Opinion
Against the darkness: Remembering Pittsburgh’s Tree of Life shooting
News
Two years after Pittsburgh shooting, solemn anniversary marked online
© Copyright 2020, Religion News Service. All rights reserved. Use of and/or registration on any portion of this site constitutes acceptance of our User Agreement and Privacy Policy, Privacy Statement and Cookie Notice. The material on this site may not be reproduced, distributed, transmitted, cached or otherwise used, except with the prior written permission of Religion News Service.