BOSTON (RNS) Forget crosses, saints and scenes from the Bible. The prominent face of a cathedral should be adorned these days with something more welcoming to all people: a seashell. 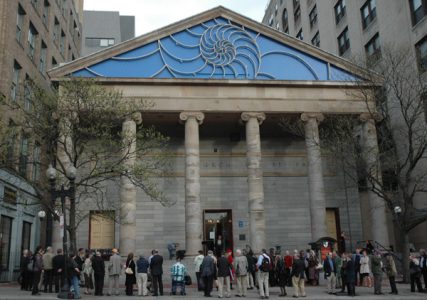 That logic has given rise to a bold new look for the front of the Episcopal Cathedral Church of St. Paul, which overlooks Boston Common. Since May, a giant aluminum sculpture depicting a cross-sectioned chambered nautilus has been lighting up the pediment in a brilliant blue and turning heads at one of Boston’s busiest corners.

It’s also igniting debate about what’s lost and gained when a church uses its high-profile facade to display an ambiguous symbol, rather than recognizable religious imagery.

The shell was chosen largely to draw attention to a granite, columned building that’s dwarfed by neighboring buildings and easily overlooked, according to Cathedral Dean Jep Streit.

“We feel like we do extraordinary things here, and we wanted to proclaim that,” Streit said. “One of our goals was to have something inviting that would attract attention and help us stand out.”

Stand out it does. Nine months after its dedication, bloggers are still writing about it. This winter, parish study groups around the Episcopal Diocese of Massachusetts are discussing how the nautilus, an organism that’s constantly expanding and switching homes, symbolizes the cathedral.

And the reviews are in. The Rev. Tim Schenck, rector of the Episcopal Parish of St. John the Evangelist in Hingham Mass., lamented in a January blogpost how the cathedral comes across as “theologically squishy.”

The nautilus “would be great on a seafood restaurant or a contemporary arts museum,” Schenck said. In the cathedral, “I want to see a place that is preaching Christ with reckless abandon. And I feel that by putting the nautilus up there, they are backing off on that.”

Streit insists a cross wouldn’t have been inviting to non-Christians.

“My question,” Streit said, “to people who wonder whether we’re selling out is: Does a cross say, ‘come and see’? Or does it say, ‘we’re Christians here’?”

For St. Paul’s, art on the facade has been a long time coming. Since its founding in 1820, the pediment had been empty because funds ran out for a rendering of the apostle. An $8 million renovation project marked the perfect moment for the cathedral to make a bold, public statement through art.

But the seashell marks a radical departure from mainstream traditions of church art and architecture. From garden statuaries to stained-glass depictions of the life of Jesus, church art has long strived to be in service to evangelism, awakening people to God’s grace and saving work in the world, according to the Rev. J. Robert Wright, professor emeritus of church history at General Theological Seminary.

For a cathedral to display exterior art that’s not recognizably Christian “is very unusual,” Wright said.

But perhaps not surprising in 21st-century Boston.

Massachusetts ranks fourth among America’s least religious states, according to a Gallup survey released this month. Boston is a young city with a large population of millennial-generation students and professionals, who are more likely than their parents to profess no religious affiliation.

Around the country, churches have been taking steps to broaden their appeal by distancing themselves from denominational affiliations, said Ronald Simkins, director of the Kripke Center for the Study of Religion and Society at Creighton University. He pointed to Presbyterian and Baptist churches, for instance, which have dropped “Presbyterian” and “Baptist” from their names in bids to draw from a larger pool of Christians.

Now the cathedral in Boston is going one step further, he said, in aligning itself with a symbol that isn’t loaded with sectarian or even Christian meaning, but is still ripe for new interpretation.

“A nautilus is not filled with any overt religious themes,” Simkins observed. “That’s not to say you can’t impute some religious themes, as it seems they have done. But you have to be informed about those. You have to go in and find out.”

Artist Donald Lipski, who designed the nautilus, said this “church for all people” needed a symbol that could “be spiritual but not be religious.” He cites Oliver Wendell Holmes’ poem, “The Chambered Nautilus,” in which the poet likens the animal to a soul, continually expanding and relocating.

But some wonder how much communication is ultimately possible through an image that lacks familiar religious content.

“If it isn’t anything that connects with the tradition of Christianity in a very explicit way,” Wright said, “it’s very difficult for it to get across its message.”