Happy President’s Day. We saw a weekend full of religion news, so let’s get right to it.

Jamie Coots, co-star of the reality show “Snake Salvation,” has died of a snakebite during a church service. In 2011, a photojournalist documented why she watched another pastor die from handling snakes.

Want a successful marriage? Pope Francis says to use three simple words: “Please, thanks and sorry.”

Meanwhile, parishioners in Kansas City have petitioned Pope Francis that Bishop Robert W. Finn should be subject to disciplinary action by the church for failing to notify authorities that a priest in his diocese was an active pedophile.

Opponents of same-sex marriage are scrambling to respond to a series of setbacks while the fights are generally headed to the federal courts. The Kansas House passed a measure last week providing a faith-based legal shield for people, including government workers, who refuse to provide services to gays and lesbians. But the top Republican in the state Senate said most Republican senators would not support it.

Bishops in the Church of England issued new guidance on Saturday warning clergy they should not bless couples in same-sex marriages.

Scientists may be more religious than you think, with nearly 36 percent of them having no doubt about God’s existence. 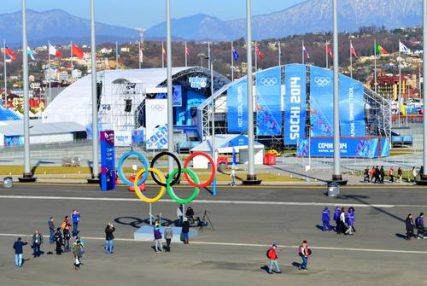 A view of the Medals Plaza in Olympic park a few hours before the opening ceremony of the Olympic Games 2014 in Sochi, Russia.

A Russian athlete crossing herself before a race was one small example among many of how the country has changed since it last hosted the Olympics, Reuters says. Meanwhile, among the most visible Americans at the Sochi Olympics are a group of evangelicals, says NPR. And Sochi’s lone rabbi, an immigrant from the U.S., has drawn on reinforcements to provide 7,000 kosher meals to Jewish visitors at the Olympics.

A new report finds that one or two of every 100 babies born in the United States now are conceived with advanced fertility help, setting a new record.

Thousands of Christians in the Philippines have broken the Guinness World Records for a charity walk for typhoon victims.

Could a robot teach a seminary class? Maybe at Southern Evangelical Seminary.

Religious American Jews who take a stand against Israel may find themselves to be in the minority among family and friends, writes Mark Oppenheimer.