(RNS4-MAY08) Archbishop Raymond Burke gives the keynote address at the National Catholic Prayer Breakfast at the Washington Hilton in Washington, D.C., on Friday, May 8, 2009. For use with RNS-CATHOLIC PRAY, transmitted May 8, 2009. Religion News Service photo by David Jolkovski.
February 21, 2014
David Gibson

VATICAN CITY (RNS) As Pope Francis led the world’s cardinals in talks aimed at shifting the church’s emphasis from following rules to preaching mercy, a senior American cardinal took to the pages of the Vatican newspaper on Friday (Feb. 21) to reassure conservatives that Francis remains opposed to abortion and gay marriage. 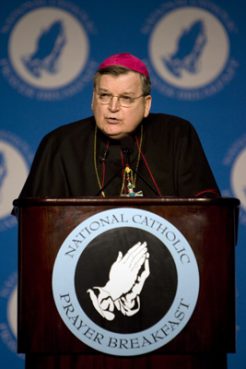 Archbishop Raymond Burke gives the keynote address at the National Catholic Prayer Breakfast at the Washington Hilton in Washington, D.C., on May 8, 2009. Religion News Service photo by David Jolkovski

Cardinal Raymond Burke acknowledged that the pope has said the church “cannot insist only on issues related to abortion, gay marriage and the use of contraceptive methods.” But in his toughly worded column in L’Osservatore Romano, the former archbishop of St. Louis blasted those “whose hearts are hardened against the truth” for trying to twist Francis' words to their own ends.

Burke, an outspoken conservative who has headed the Vatican’s highest court since 2008, said Francis in fact strongly backs the church’s teaching on those topics. He said the pope is simply trying to find ways to convince people to hear the church’s message despite the “galloping de-Christianization in the West.”

Burke added that the “false praise” from those who highlight Francis’ shift in tone and practice actually “mocks” his role as pope. Francis, the cardinal said, trusts God alone and “rejects the acceptance and praise of the world.”

Burke said he was prompted to write his column after a recent visit to the U.S. in which he became alarmed that so many people wanted to know whether the pope’s statements about not judging gays and his stress on mercy and welcoming everyone augured a change in church doctrine.

Burke has a long-standing reputation as one of the church’s most vocal hard-liners, with his broadsides on abortion and gay marriage even targeting his fellow American bishops. When Francis last year dropped Burke from an influential Vatican body that helps pick new bishops, it was seen as a significant shift in the church’s political dynamic.

Burke's piece in the pages of the Vatican's own semiofficial newspaper is an indicator of conservatives' unease that their priorities are viewed as out of favor. Burke wrote that Francis’ new approach “cannot change the duty of the Church and her shepherds to teach clearly and insistently about the most fundamental moral questions of our time.”

At another point, he said that what Francis has called a “new balance” in the church's approach does not require anyone to be “silent” about sexual morality; he argued that those issues must remain central to the church’s message.

In another sign of conservative unease about Francis, Sandro Magister, an Italian journalist who often channels the views of the Vatican old guard, on Friday wrote a column that pointedly questioned “the risks of the strategy of silence” that Francis is following by not speaking out on issues like the child euthanasia law recently passed in Belgium.

“He never proclaims Church teaching out loud at a moment when the dispute over an issue has become heated,” Magister wrote.

But that seems to be the way Francis wants it.

As he opened the second of two days of meetings with the world’s cardinals, Francis went out of his way to praise Thursday’s talk by German Cardinal Walter Kasper, who is a leader in pushing the church to carve out more space for Catholics who, for example, have divorced and remarried outside the church.

Those Catholics currently cannot receive Communion, and how to welcome them was a major topic of these closed-door talks among the 150 cardinals. They were joined by nearly 20 bishops who are to be made cardinals by Francis in a ceremony on Saturday in St. Peter’s Basilica.

The pope summoned the cardinals to Rome a few days early so that they could discuss a range of challenges on family life, such as cohabitation, contraception and same-sex marriage.

Commenting Friday on the lengthy introductory talk by Kasper -- who had often been a theological sparring partner with Francis’ predecessor, the more conservative Pope Benedict XVI -- Francis praised Kasper's “profound” and “serene” theology.

According to the Vatican's chief spokesman, the Rev. Federico Lombardi, the subsequent private discussions among the cardinals on Friday ranged over many topics and included suggestions for “improving and simplifying” the process for getting an annulment.

But Lombardi repeatedly stressed that the talks were not aimed at crafting proposals but were part of a two-year process of “discernment” as the church looks for “a better way” to deal with the complex issues of modern family life.

Francis will convene a major meeting of many of the world’s bishops, called a synod, this October and in the fall of 2015 to come up with more concrete proposals that the pope can then accept or modify.

In the meantime, Francis clearly hopes that these kind of meetings will herald a new era of collegiality and dialogue in the church. As Cardinal Daniel DiNardo of Houston told a fellow cardinal before the morning session began: “We’re here to learn today. It’s back to school!”