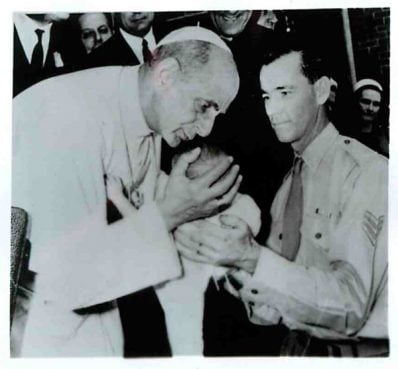 During a visit in Sydney, Pope Paul VI bends to kiss a baby held by his soldier father at the Royal Alexandra Hospital for Children in the Australian city. Religion News Service file photo

ROME (RNS) Vatican theologians have given their approval to a miracle attributed to the intercession of Pope Paul VI, moving him a step closer to sainthood.

The team of medical professionals and doctors that advise the Vatican’s Congregation for the Causes of Saints already had approved the same miracle in December. Now that a panel of theologians has signed off, the miracle only requires a review by Pope Francis to be considered official.

When that happens, Paul will be beatified — the final step before sainthood. A second miracle is typically required for canonization.

In the early 1990s, a pregnant woman was told her fetus had serious problems that usually result in brain damage. Doctors advised her to abort, but the woman refused, praying for the intersession of Paul based on the writings in his 1968 “Humanae Vitae” encyclical about the defense of human life.

The child was born without problems, and now that the child is a young adult and remains healthy, doctors and theologians agree he was completely healed. 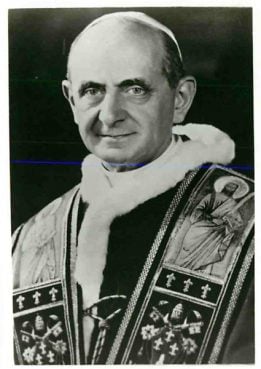 Pope Paul VI died in 1978 at the age of 80 after suffering a heart attack in his summer residence at Castel Gandolfo, Italy. Religion News Service file photo

Paul was a pivotal pope for the Roman Catholic Church, even as he is sometimes overshadowed by the charismatic papacies of his predecessor, John XXIII, and John Paul II, who are both scheduled to be declared saints on April 27. John XXIII and Paul VI were seen as so important that the man who succeeded Paul, John Paul I, took both names as his own; he died a month after his election.

Paul oversaw the conclusion and implementation of the Second Vatican Council (1962-1965), which among other things transformed relations with other Christians and Jews and changed the Mass from Latin to local languages. His encyclical “Humanae Vitae” banned artificial birth control, and he was also the first pope to visit Jerusalem. 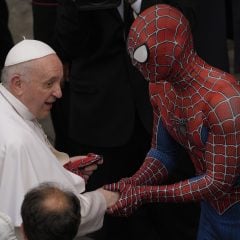