WASHINGTON (RNS) Arizona Gov. Jan Brewer may have ended the latest controversy in her state by vetoing a “religious freedom” bill that threatened gay men and lesbians, but the nation’s legislatures and courts are just getting started. 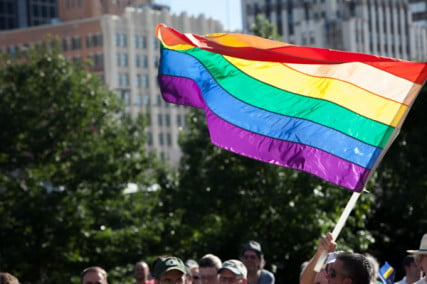 While religious liberty remains a “core value” in Arizona, Brewer said Wednesday (Feb. 26), “so is non-discrimination.” And therein lies the balancing act that’s at the root of several other disputes.

The answer isn’t simple. Congress and the states often carve out exceptions for religious beliefs. The Supreme Court has consistently made room for religious exercise. And unlike race and gender, sexual orientation is not a protected class — yet.

However, for a religious liberty bill such as Arizona’s to pass the smell test, it must show a compelling interest on the part of those who want to flex their religious muscles, and it must not impose undue costs or burdens on others. That is where many such efforts collapse.

“We ought to accommodate religion when we can,” says Frederick Gedicks, an expert on law and religion at Brigham Young University Law School. “That is, when it doesn’t impose significant costs on others.”

If photographers, bakers and florists refused to serve gay men and lesbians, could they get the services easily elsewhere? Even if they could, would they be embarrassed or insulted by the slight? 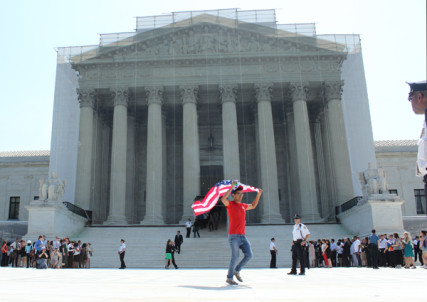 A man exits the Supreme Court building carrying an American flag after the high court made its rulings on same-sex marriage Wednesday (June 26, 2013). RNS photo by Adelle M. Banks

The first question is paramount in the Supreme Court challenge by for-profit businesses to the so-called “contraception mandate” in the health care law. The companies argue that female employees can get birth control easily on their own, without their employers’ assistance.

The second question was addressed by Supreme Court Justice Anthony Kennedy in last year’s opinion striking down a key section of the Defense of Marriage Act, which denied federal benefits to legally married same-sex couples. Kennedy said the purpose and effect of the law was “to impose a disadvantage, a separate status, and so a stigma” on those couples.

Beyond assessing the burden on consumers or employees, the other relevant question in most cases is: What’s the compelling interest?

In the case of Arizona’s businesses, Brewer said, there wasn’t one. The bill “does not seek to address a specific and present concern related to Arizona businesses,” she said.

It’s quite possible that the New Mexico photographer cannot avoid serving gay men and lesbians, as the state Supreme Court ruled. But the U.S. Supreme Court could permit an Oklahoma-based arts-and-crafts company and a Pennsylvania woodworker to deny some contraception coverage to their employees.

That’s because in the latter case, it’s the government compelling family-owned corporations to do something against their owners’ religious beliefs, says Anthony Caso, a law professor at Chapman University in California who has submitted a brief supporting Hobby Lobby and Conestoga Wood Specialties.

But Sally Steenland, director of the faith and progressive policy initiative at the liberal Center for American Progress, said religious beliefs can’t overcome the Constitution’s guarantee of equal protection.

“What ends up happening is that religious beliefs trump the Constitution, and people can pick and choose the laws they want to obey,” she said. “It enshrines discrimination as a religious belief.”