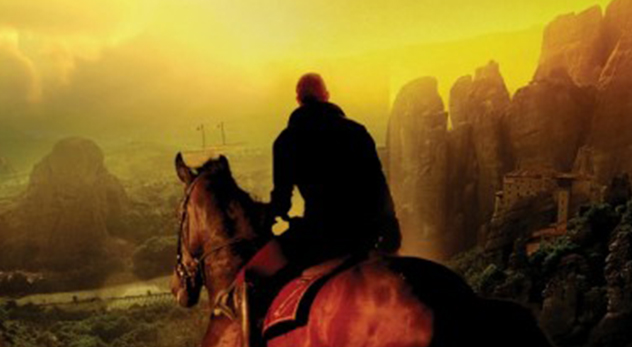 Author and priest Dwight Longenecker says the Christian story is more than a myth and the greatest story ever told. - Image taken from "The Romance of Religion," courtesy of Thomas Nelson Publishers
March 4, 2014
Jonathan Merritt

Author and priest Dwight Longenecker says the Christian story is more than a myth and the greatest story ever told. - Image taken from "The Romance of Religion," courtesy of Thomas Nelson Publishers

Author C. S. Lewis once argued that Christianity works on us like every other myth, except it is a myth that really happened. Dwight Longenecker takes this idea a step further in his book, "The Romance of Religion: Fighting for Goodness, Truth and Beauty," arguing that the Christian story is the greatest ever told because it gathers up what is true in the best fantasy stories and makes them real. Here I talk to the author, blogger, and priest about his big idea and why he believes the Christian faith is fundamentally romance.

RNS: When someone calls faith a fairy tale or fantasy, some Christians might have a negative reaction, as if this undermines the authenticity of their faith. Your thoughts?

DL: The problem is when people say faith is "merely" a fairy story, fantasy or myth. The word "merely" is a killer because nothing in life is as simple as that. "Merely" is a word that reduces rather than amplifies. I am always looking for the "more" not the "mere." Instead of saying that faith is a fairy tale or fantasy, I like to say the stories of the  Bible are as powerful as a fairy tale or fantasy. I then explain what myth and fairy tales really do--how they connect with the deepest parts of our hearts through the imagination and how the real life faith stories have that same power to inspire and transform.

RNS: Opponents of religion doubt Christianity because there are so many other ancient stories and myths that parallel those in the Bible. How do you respond? Is Christianity just one more myth?

The main difference is that the pagan myths do not pretend to be historical. But the authors of the Biblical stories always root them in recognizable place and time. While the places and times are not always verifiable according to our criteria of proof, the point is that the authors consider the stories to be about real people at a real time in a real place. The Biblical authors are insistent that these "mythical events" occurred not to mythical beings, but to ordinary people.

RNS: In naming the fairy tale quality of the gospel, Frederick Buechner says that “it not only happened once upon a time but has kept on happening ever since and is happening still.” Can you say something about how the Christian story continues to be realized?

DL: My grandfather was walking across a bridge on a frozen winter morning with his two young sons when the driver of a coal truck lost control. The truck skidded across the icy road straight into my grandpa and my young uncles. He threw himself in the path of the truck, pushing his sons out of the way. When he died a few days later after great suffering his last words were, "Don't you see them, they're so beautiful!"

Thus the same ancient stories with their mythic themes are being lived out today, and I would contend that we only have eyes to see this because the Judeo-Christian tradition has enabled us to see what might be called "living myth."

RNS: You identify Christ as a romantic hero, yes?

DL: The classic hero follows what mythologist Joseph Campbell called "the mono myth." This is the "hero's quest" in which the hero leaves his ordinary world and launches out into a realm of adventure. He goes through the dangerous realm and risks everything to complete a perilous quest. He goes through a death and resurrection and returns home victorious--having won redemption and salvation for his people.

If you consider the Christ story in these terms, then yes, he leaves his heavenly home to come into this world to engage the powers of evil in a great battle. He does so to attain the great prize of life for himself and his people, and through his sacrifice he conquers. The story turns, and in his resurrection and ascension, we see his triumph and return. The Christian message is that through faith and baptism we identify with Christ the hero and we hear his call to embark on our own heroic adventure--the adventure of faith.

RNS: If true, then the Christian faith is “romance.” What does this mean for believers to live into the romance today?

First, we drop the idea that religion is no more than a dull adherence to a set of moral rules, social regulations, and set dogma. We need the rules, regulations and dogma, but they are not the journey. They are the map for the journey. At the heart of true religion is for one to hear the call to adventure, respond to that call, and set out on a path that may cost us, in T.S.Eliot's words, "Not less than everything."

This is the heart of the story from the very beginning with Father Abraham setting out for the promised land, of Moses and the Israelites, right through the whole Old Testament to Jesus calling those rough and ready fishermen to become fishers of men and knocking Paul off his horse to be totally converted. This is the story from the beginning, and when the faith story is re-vitalized and ordinary people hear the call and take the risk, faith comes alive again.