(RNS) Countering the notion that Mormons believe they will someday inherit their own planets, the Church of Jesus Christ of Latter-day Saints has issued a new statement on “Becoming Like God” that tries to put distance between official church teaching and the age-old notion.

The article, which was posted on the church’s website last week (Feb. 25), attempts to explain complex theology that church officials believe has been overly simplified into inaccurate “caricatures.”

Just as heaven is often depicted as people sitting on clouds strumming harps, “Latter-day Saints’ doctrine of exaltation is often similarly reduced in media to a cartoonish image of people receiving their own planets,” the statement says.

One of the recent depictions occurs in the Tony-winning play “The Book of Mormon,” which includes a song, “I Believe,’’ that declares God’s “plan involves me getting my own planet” in the afterlife.

“While few Latter-day Saints would identify with caricatures of having their own planet, most would agree that the awe inspired by creation hints at our creative potential in the eternities,” the LDS church statement says.

This newest statement joins other recent church explanations of plural marriage and the ban on ordination of black men to the priesthood, two thorny issues that the church no longer upholds.

It’s not the first time the church has tried to distance itself from the planet notion, which is often used by critics of Mormonism to discredit the faith. “This idea is not taught in Latter-day Saint scripture, nor is it a doctrine of the Church,” according to the church’s online “Mormonism 101” feature. “This misunderstanding stems from speculative comments unreflective of scriptural doctrine.”

Mormons relate exaltation in the afterlife to their here-and-now experiences of family and community life, the statement says. “They see the seeds of godhood” through the joy of raising children, serving others and appreciating the universe’s beauty.

“Church members imagine exaltation less through images of what they will get and more through the relationships they have now and how those relationships might be purified and elevated,” it says.

Scholars have offered different interpretations of these Mormon beliefs.

Richard Bushman, author of “Joseph Smith: Rough Stone Rolling,” told The Salt Lake Tribune that the statement was a “deft” explanation of an often-misunderstood faith.

“It sort of puts the caricature of the Mormons owning their own planet in perspective,” he said. “In a way, it dismisses it, but it goes on to say this is a respect for the mighty powers of God and creation, and suggests that we may have a part in it.”

But Matthew Bowman, author of “The Mormon People: The Making of an American Faith,” told NBC News in a 2012 interview that the lyric of the musical’s song could ring true for some Mormons.

“That really depends on what Mormons you talk to,” he said. “To many Mormons, this means more or less attaining perfect communion with God. To many others, particularly Mormons who tend to be literal-minded, it does mean continuing to create universes in the future.”

The LDS church statement notes that Mormon beliefs about human divinity have long differed from traditional Christian views. But it points to several biblical verses that support its interpretation, such as Jesus’ command that his disciples should be “perfect, even as your Father which is in heaven is perfect.”

“Latter-day Saints see these scriptures as straightforward expressions of humanity’s divine nature and potential,” says the statement, which includes 56 footnotes. “Many other Christians read the same passages far more metaphorically because they experience the Bible through the lens of doctrinal interpretations that developed over time after the period described in the New Testament.” 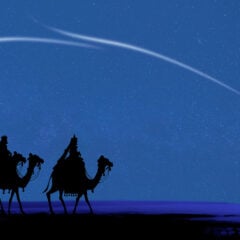 News
Do you see what I see? Planetary alignment to create a ‘Christmas star’