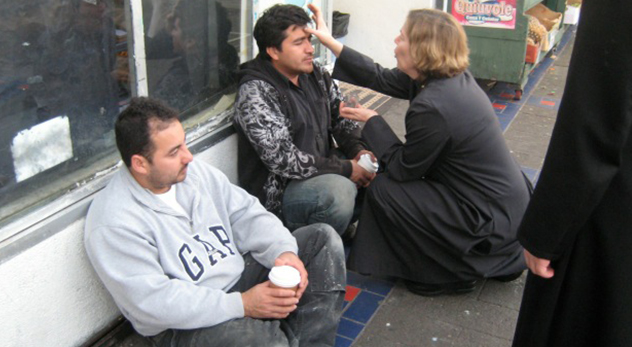 Sara Miles is a former-atheist-turned-believer and author of the critically-acclaimed "Take This Bread" and her newest book, "City of God: Faith in the Streets." She is Director of Ministry at St. Gregory of Nyssa Episcopal Church in San Francisco. Sara has what some might consider a radical Ash Wednesday practice. Here, we talk about how she spends this holy holiday and why Ash Wednesday matters.

RNS: On Ash Wednesdays, you do something radical. Tell us about that.

SM: Beginning in 2010, I’ve spent a good part of each Ash Wednesday on the streets of my neighborhood––at bus stops, in back alleys, fast-food joints and taquerias--offering ashes to anyone who wants them.

SM: I loved going in to a beauty shop where the hairdresser gently lifted up his customer’s big teased bangs as she sat getting highlights, so that I could mark her forehead. The transforming realization is that ashes aren’t something “imposed” by one person on another: pressing my thumb on a stranger’s forehead blesses and changes us both. In every brief, intense, unpredictable moment of encounter on the street, it’s as if time just stops, and God’s presence flares out between us.

RNS: What I love about this story is that you take what is traditionally a practice for church people and use it as a springboard to connect with those outside.  Is it important to get outside of our church walls & connect with those who might never enter?

SM: It’s strange that doing Ash Wednesday on the streets is seen as a new or exotic practice. In fact, worship outside of church is the unexceptional historical norm for Christianity­­. God has never been picky about showing up anywhere: a burning bush, the womb of a humiliated teenage girl, a dirty feed trough, a party or prison. God lives in relationship with all kinds of people––the weak, the querulous, the not-so-bright––and is revealed in the relationships we have with our neighbors and with strangers.  Why wouldn’t we want to look everywhere we possibly can to see more of what God is doing?  God has left the building. 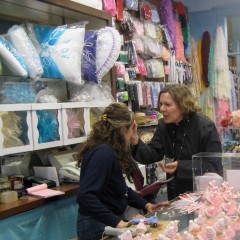 RNS: The traditional church practice of applying ashes seems strange and even mysterious to those who aren’t Christians. What is the benefit?

SM: Ash Wednesday should be the least appealing of Christian holidays—no gifts, no festive carols, no special meals. Nobody gets a greeting card for Ash Wednesday: all you get is someone smearing dirt on your forehead and telling you that you’re going to die. And yet, even in a strongly secular city like San Francisco, hundreds and hundreds of people, not all of them Christians, come up––even chase me down the sidewalk––to get those ashes. I think the power of the ritual is that it’s an opportunity to finally tell the truth in public. It’s a relief to admit that,  like everyone else, you’re not in charge. Despite the culture’s insistence that more things or bling, money or advertising will keep us alive, the plain truth is that we’re all just mortal…and we’re connected to one another.

RNS: What will the rest of Lent, these next forty days leading up to Easter, look like for you?

I hope it will look like repentance, by which I don’t mean feeling guilty, or acting super-pious. Repentance means turning away from all the stuff that binds me—laziness, busy-ness, nostalgia, self-loathing, fear––and turning toward God, and toward other people, with desire. Lent is a chance for me to fail at that, and to get up and do it again.

RNS: I’ve read you’re a former atheist. What convinced you to give Jesus a chance?

SM: I didn’t grow up going to church, and I certainly didn’t have any interest in becoming a Christian—or, as I saw it, a religious nut. I wasn’t a “seeker,” and I was never “convinced” by doctrine, or any kind of intellectual argument. But Jesus happened to me, when I was 46 and, unplanned, took my first communion. I ate a little piece of bread and had a sip of some rather sticky wine, and realized two things. One was that this bread was absolutely real––flour, water, salt, yeast.  And the other was that Jesus, whom I didn’t believe in, was alive and in my mouth.

I think my Christian faith continues to be very physical, centered on experiences of God incarnate in flesh and blood.