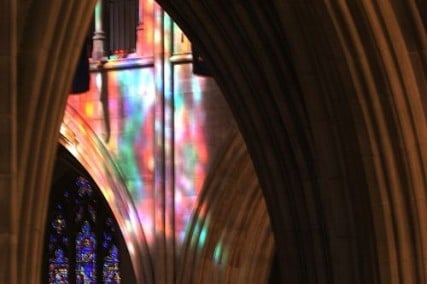 The “nones” are on the rise. Photo courtesy Colt Maverick via Flickr Creative Commons.

It contains a lot of fascinating data, but much of the news I’ve read about the report has seemed to largely focus on a single finding: That around one third of American Millennials who have left their childhood religion did so at least in part because of anti-LGBTQ rhetoric or teachings.

There are a few particularly significant aspects of this that I think have been somewhat overlooked. Below are three; please read the report and share your thoughts in the comments.

1. Those leaving because of LGBTQ issues may be getting the wrong message.

PRRI reports that seven-in-ten Millennials believe that religious groups are alienating young people by being judgmental about LGBTQ issues. But the popular perception that many religious communities are broadly anti-LGBTQ doesn’t seem to reflect reality.

For example, PRRI’s new report found that 75 percent of Catholics think that other Catholics disagree with same-sex marriage—but PRRI also reports that Catholics are actually more supportive of legal recognitions of same-sex relationships than Americans overall, that Catholic support of all rights for gays and lesbians is higher than support among the general public, and that over 75 percent of Catholics think that same-sex relationships should be accepted by society.

The disconnect between religious people’s actual views on LGBTQ issues and how religious groups are perceived is widespread. Take this, from the PRRI study:

Regular churchgoers (those who attend at least once or twice a month), particularly those who belong to religious groups that are supportive of same-sex marriage, are likely to over-estimate opposition for same-sex marriage in their churches by 20 percentage points or more.

When it comes to opposing LGBTQ rights, religious institutions are of course far from blameless; but their members are also far more supportive of LGBTQ rights than many of us think.

This suggests that we need to do a better job of talking about religion in a way that reflects the diverse views of religious people, not just the most extreme points of view. Ours is a conflict-driven culture that privileges the most extreme perspectives, and we tend to associate groups with their most outrageous or hateful members.

So let’s make an effort to lift up diverse religious voices that can paint a more accurate picture. As an atheist I would prefer to see religious communities that are safe and welcoming for LGBTQ people and allies than to see those people leave their communities just because they think they have to.

2. This isn’t just about religious views on LGBTQ issues; in fact, it mostly isn’t.

We should also be very careful not to make the story about Millennials leaving religion entirely about LGBTQ issues—especially because that erases the experiences of those of us who left because we don’t believe in or agree with the core teachings of a religious tradition.

For many who leave religion, concerns about LGBTQ issues may be a catalyst that leads to further questioning, but ultimately not the primary or exclusive reason. Thus many departures seem to, overall, have less to do with views on LGBTQ issues and more to do with an overall disagreement with the tradition’s teachings.

Sure enough, PRRI’s October 2012 American Values Survey asked religiously unaffiliated Americans the main reason they left their religion of origin. The most popular response by a significant margin was “Don’t believe in God/teachings.” Those who left for “Social/Sexuality reasons” made up just 4 percent of respondents.

This resonates with my own experience as someone who had very negative experiences in an anti-gay church—but who also had extremely positive experiences in welcoming Christian churches when I came out as queer. I eventually left Christianity because I studied it and decided that I didn’t believe its central claims were true, not because I thought Christianity was necessarily anti-LGBTQ—because, in my experience, it wasn’t always. So while my sexuality played a role, it certainly wasn’t the primary reason.

We’re living in a time of religious fluidity, where people are perhaps freer than ever to change or abandon their religious identity of origin—and we should acknowledge the many reasons people do so. We should also celebrate their ability to choose or reject an identity, particularly for those who do so because that identity does not reflect their beliefs.

3. Many Millennials are leaving religion. But where are they going?

It’s certainly important to explore the varied reasons so many Millennials are disaffiliating from organized religion. But I’m especially interested in a different but related question: What now? What are they stepping into, not just stepping out of?

This is a question without a clear answer. While a sizable majority of religiously unaffiliated Millennials claim to believe in a God or universal spirit, communities for atheists, agnostics, and Humanists are also on the rise. Surely these nontheistic communities will play a significant role in providing support for and resources to nonreligious Americans. But what about those who are unaffiliated but theistic? As far as I can tell, that remains a question.

I hope to see more research on this soon—research that explores where unaffiliated Americans are going and what kinds of communities they’re creating, not just what they’re leaving behind. If you know of any interesting research on this question, please share it in the comments.

Signs of the Times
Six things you need to know about Pope Francis and gay civil unions
Faith
Pope Francis’ support for civil unions is a call to justice — and nothing new
News
Pope Francis voices support of civil unions for LGBTQ couples in new documentary
News
Black skeptics find meaning in uplifting their community through social justice
News
Sex and ‘church ladies’: True-to-life secrets beyond Black church pews
© Copyright 2020, Religion News Service. All rights reserved. Use of and/or registration on any portion of this site constitutes acceptance of our User Agreement and Privacy Policy, Privacy Statement and Cookie Notice. The material on this site may not be reproduced, distributed, transmitted, cached or otherwise used, except with the prior written permission of Religion News Service.