NAIROBI, Kenya (RNS) A call for greater acceptance of gays and lesbians has put African and Western churches on a collision course, as some African clerics liken mounting criticism from the U.S. and Europe to a new wave of colonization by the West.

Consider some of the statements at a news conference last week led by Bishop Arthur Gitonga of the Redeemed Church in Kenya:

“Homosexuality is equivalent to colonialism and slavery,” said one participant.

“We feel it’s like a weapon of mass destruction,” said another.

“It is not biblical and cannot bring blessing to Christians,” said a third.

Gitonga, a powerful East African Pentecostal church official, is among a group of Kenyan leaders who have launched “Zuia Sodom Kabisa,” Kiswahili for “Stop Sodom Completely.” The campaign seeks 1 million signatures to petition legislation to criminalize homosexual acts in Kenya.

“There is little connection between homosexuality and the historical occurrences: slavery and colonialism,” said George Gona, a historian at the University of Nairobi. The differences are cultural, he added.

Still, the harsh language attests to a sense of betrayal some Africans feel toward the West.

Across Africa, thriving churches are a testament to the work of missionaries from Western nations. Clergy say they are ever grateful to Western churches for sending missionaries to Africa and making converts to Christianity.

Now many clergy feel Western churches are on a reverse trajectory, as they accept homosexuality, which is seen as unscriptural and contrary to African culture.

Anglican Archbishop Stanley Ntagali of Uganda was a strong supporter of the final bill there. He was among the religious leaders who recommended changes in 2010 to make it less harsh by removing the death penalty, reducing the sentencing guidelines and deleting a clause on reporting homosexual behavior.

On Wednesday (March 5), Ntagali denied reports that the province was considering breaking away from the Anglican Communion. According to the primate, the fabric of the Anglican Communion was torn in 2003 when the Episcopal Church in the United States consecrated Gene Robinson as bishop in New Hampshire.

“Not only was this against the Bible, but it went against the agreed position of the Anglican Communion,” Ntagali said.

Still, he acknowledged the differences on the subject have been a source of tension.

“This can be awkward for us because they are our Mother Church,” added the archbishop, referring to the Anglican Communion.

Other Ugandan church leaders have also backed the new legislation, saying it will help stop recruitment to the gay lifestyle and will combat funding and promotion of homosexuality.

“We draw our authority from our sacred books that teach homosexuality is part of human weakness that must be addressed at personal level through repentance,” said Metropolitan Jonah Lwanga, the archbishop of Uganda’s Orthodox Church.

Meanwhile, the Inter-Religious Council of Uganda, a grouping of Anglican, Roman Catholic and Orthodox churches, said the denominations would show respect, practice nondiscrimination and offer compassion to homosexuals.

Kenyan religious scholar Abdallah Kheir said people are not interested in pushing back on gay rights in retaliation for Western colonialism and slavery.

“Homosexuality is not new in Africa, but what the faiths are opposing is the open promotion and marketing of the practice in communities,” said Kheir. “Gays and lesbians have been in existence here, but it has never been a problem until recently when they came out into the open.” 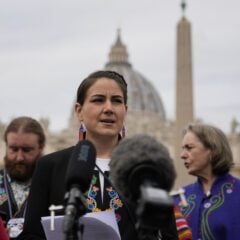 Religion Hub
Vatican says they’re gifts; Indigenous groups want them back
Follow us on Facebook!
Submit your photos to RNS