(RNS) United Methodist Bishop Martin D. McLee of New York on Monday (March 10) announced he was dropping a case against a retired seminary dean who officiated at his gay son’s 2012 wedding and called for an end to church trials for clergy who violate the denomination’s law on ministering to gays.

The resolution of the Rev. Thomas Ogletree’s case highlights an emerging dynamic that allows some pastors in the country’s second-largest Protestant denomination to skirt rules banning clergy from performing same-sex wedding, while others risk costly church trials and the loss of clergy credentials. Increasingly, those differences are geographic.

“Church trials produce no winners,” McLee said. “(They) result in harmful polarization and continue the harm brought upon our gay and lesbian brothers and sisters.”

Ogletree, 80, a former dean of both the Yale Divinity School and Drew Theological Seminary, called presiding at his son’s wedding “an act of pastoral faithfulness and fatherly love.”

Asked Monday if he would perform another same-gender ceremony, he answered, “Sure.”

The resolution in his case differs markedly from that of Frank Schaefer, a former Pennsylvania pastor who was found guilty of violating church law when he officiated at his son’s 2007 wedding. Schaefer was stripped of his credentials when he refused to agree not to perform additional same-sex weddings.

At least three other clergy face possible trials amid a growing wave of defiance of church law. The United Methodist Church accepts gay and lesbian members, but its Book of Discipline calls the practice of homosexuality “incompatible with Christian teaching” and bars clergy from performing same-sex unions or holding them on church property. 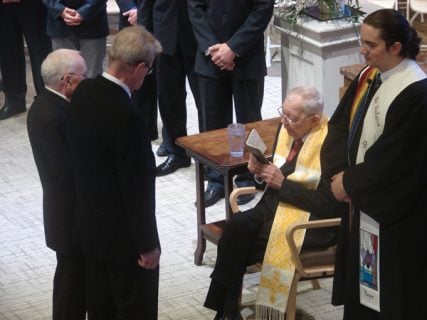 “The two parts of the country that most strongly favor gay ordination and so forth are the West Coast, particularly the Pacific Northwest, and the Northeast,” he said. “Those places have Methodists in smaller numbers.”

Some Methodist clergy are asking to serve in regions of the country friendly to their views on gays and lesbians.

The Rev. Jen Stuart, associate pastor at First United Methodist Church of Austin, Texas, for example, asked to be transferred to the Pacific Northwest Conference so she can be ordained an elder in a region more supportive of gay and lesbian equality.

She points to the treatment of a classmate removed as a candidate for ministry because she is gay, as a motivating factor. The Schaefer trial convinced Stuart she had to minister in an inclusive conference.

“I can’t make these promises to uphold the Book of Discipline,” she said.

In another example of the marked contrast in punishments for disobedience on gay weddings, two Methodist pastors in the Pacific Northwest Conference, the Rev. Cheryl A. Fear and the Rev. Gordon Hutchins, were suspended without pay for 24 hours for officiating at same-sex weddings. The two acknowledged they presided at such ceremonies after Washington legalized same-sex civil marriage in 2012.

But even if the 7.5 million-member U.S. denomination were split evenly on the issue, it would be outweighed by the 4.8 million United Methodists in Africa, where most take a far more conservative stance on sexuality issues.

“The people in Africa vote at General Conference, too,” said Steinmetz. “Every four years the numbers get larger against, not larger for.”

Worldwide, the percentage of United Methodists who support gay marriage is small, he said. And for now, geography is destiny when it comes to discipline. 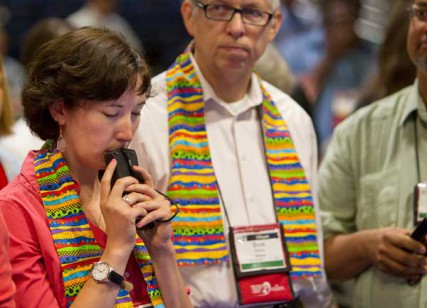 Delegate Sara Ann Swenson, left, of Minnesota presses her voting keypad to her lips while awaiting results of a vote on the United Methodist Church’s stance on sexuality during the denomination’s 2012 General Conference in Tampa, Fla. At center is the Rev. Bruce Robbins, a fellow delegate. Photo by Mike DuBose, courtesy of United Methodist News Service

Meanwhile, a denominational panel, the Connectional Table, is studying the relationship between U.S. churches and those overseas and will propose changes to parts of the Book of Discipline to better reflect the church’s global nature.

Its task includes issues of regional structure, autonomy, ministry training and mission. But those issues quickly lead to discussions of sexuality, said Bishop Bruce Ough, who leads the Minnesota Annual Conference and chairs the Connectional Table.

While recommendations to the 2016 General Conference are intended to better reflect the diverse global church, they will likely reflect the conservative views most Africans hold on lesbian, gay, bisexual, transgender and queer issues rather than the more liberal sensibilities of American culture, Ough said.

McClee said he expected some to cheer the Ogletree resolution, while others will jeer its failure to hold the retired pastor accountable.

And indeed, the Rev. Randy Paige, pastor of Christ Church United Methodist Church in Port Jefferson Station, N.Y., who filed charges against Ogletree, issued a statement that said: “I am disturbed that this settlement appears to represent a determination on the part of the New York Annual Conference leaders that they will no longer enforce or uphold the Discipline on this matter. … Today’s settlement increases the probability that schism will take place.”

Since October, Methodists in New Directions, a group that advocates for gay and lesbian inclusion, has published on its website essays by people who presided at same-sex weddings. No complaints about them have yet become public, and McClee would not say if he has received any.

“I am duty-bound to deal with any complaint that comes across my desk,” he said. “If we have a case, I will deal with it in an honest, open way. I hope we never have a trial.”