This non-Irish Bailey wishes you all a very happy St. Patrick’s Day during this March Madness season. Here’s what you need to know before you head to the water cooler this morning.

1. The Rev. Fred Phelps Sr., founder of the Westboro Baptist Church in Topeka, Kan., which became famous for its controversial protests at funerals, is ill and in hospice care. His estranged son posted on Facebook that his father had been excommunicated from the church and church officials are not allowing family members who have left the church from seeing him. Phelps was once a widely hailed civil rights lawyer who won an award from the NAACP. Here’s a debate: Should people who are gay protest Phelps funeral? 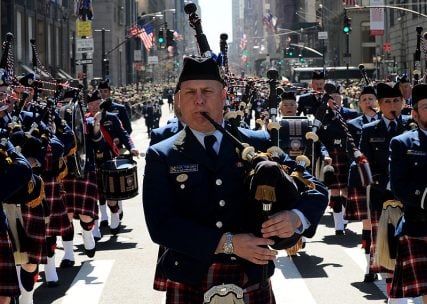 2. On this St. Patrick’s Day, tensions are brewing at several parades as some, including New York’s mayor, Boston’s mayor, Guinness, Heineken and Sam Adams beer, dropped out over barring people from marching while holding signs that express their sexuality.

3. Services were held on Sunday for the victims who died in last week’s explosion in Harlem. Mayor Bill de Blasio attended, telling parishioners at the Church of God that “in this tragedy is an example to us all of the love that permeates this city.” A Bible was pulled from the rubble, an original used by the founders of the Spanish Christian Church, a fixture in the community for 80 years.

4. President Obama will meet President Mahmoud Abbas of the Palestinian Authority at the White House today to urge him to sign the latest round of peace negotiations with Israel.

5. Elevation Church, under the spotlight for its finances, baptisms and Sunday school drawings, has released its first audit report and joined the accreditation organization Evangelical Council for Financial Accountability.

6. A federal judge has ruled that Tennessee must recognize three out-of-state same-sex marriages. Meanwhile, contributors at the ecumenical magazine First Things are debating whether Christians should continue performing civil ceremonies.

7. Denominations were wealthier last century, but as they downsize in a growing secular era, many are selling desirable assets.

8. Germany’s new Catholic leader signaled that there may be some movement on divorce and receiving the sacraments.

9. Christians and Muslims have joined to try to help people held in modern-day slavery. The Global Freedom Network launched Monday at the Vatican, the brainchild of billionaire Australian mining magnate Andrew Forrest.

10. Auctioneers are trying to figure out how to remove a giant fiberglass Buddha statue from a former Buddha Bar restaurant in Washington, D.C.