(RNS) As mainline Protestant denominations continue decades of decline, one of the main institutions helping educate its leaders announced Wednesday (March 19) that it will shut its doors. 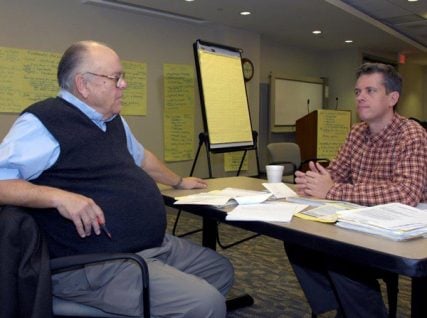 Since it was founded four decades ago, the Virginia-based Alban Institute has guided mostly mainline congregations through consulting and publishing. Its founder and former president, the Rev. Loren Mead, became well-known for his speaking and writing about the future of U.S. denominations and was one of the first to predict denominational decline.

“When I started as a parish pastor, I found there wasn’t much help or continuing education,” said Mead, a retired Episcopal priest. “I am glad I have been able to contribute to the church, but I have not been able to solve its turnaround.”

Many mainline churches looked to Alban to provide literature and consultants for maintaining their institutional life, on everything from finding a new pastor to strategies for growth and financial health.

But as more publishers and consultants got into the business that Alban paved the way for, the institution found it difficult to continue its niche. Like other nonprofits during the recent recession, it also lost revenue.

“The Alban Institute went through the great recession just like everyone else,” said Jim Wind, who retired as president of Alban earlier this year. “The market got tougher to thrive in.”

Total assets from the institute fell from $5.1 million in 2010 to $3.2 million in 2012, according to its most recent financial disclosure forms. Alban is in talks with Duke Divinity School to assume the remaining assets of an estimated $300,000 to $500,000, with the possible creation of an “Alban Endowment Fund.” Duke will also acquire Alban’s intellectual property and mailing lists.

A letter from the chairman of Alban’s board, Case Hoogendoorn, said the changes will allow Alban’s mission to continue, “albeit in a different form.”

Some critics have questioned Wind’s hefty compensation package. Hoogendoorn said Wind’s salary was appropriate because he was also involved in overseeing the separate Indianapolis Center for Congregations, which spun off as an independent organization in 2003, with a combined budget of about $10 million.

Alban’s total expenses in 2012 were $2.8 million. The nonprofit reporting company GuideStar recommends that the CEO of an organization with a budget between $1 million and $5 million make an average of $154,572 in salary, about half of what Wind was making.

In 2011, Wind received a $100,000 loan from the Alban Institute “to alleviate housing cost differ. between DC and president’s former city,” tax documents state. The nonprofit watchdog group Charity Navigator states that while loans to charities are permitted, it can create conflict of interest issues and can be “an indicator that the organization is not financially secure.”

Alban’s publishing program has been acquired by the Rowman & Littlefield publishing house, which will continue to publish books with the Alban imprint. The books will continue to focus on church governance, leadership and development with editorial oversight from Duke.

The purchase includes about 270 active titles from authors such as Diana Butler Bass, Peter L. Steinke and Roy M. Oswald. The publisher’s CEO told Publishers Weekly it will produce 25 to 30 books a year alongside its other religious imprints.

Alban was a significant resource for some clergy who sought more resources than what seminaries were providing several decades ago.

“The Alban Institute is a huge symbol of continuing education and refreshment for me,” said the Rev. Ed Bacon, the rector of the 4,000-member All Saints Episcopal Church in Pasadena, Calif. “It was bringing in the very best practices of organizational development and applying them to church organizations.”

Alban was sustained largely by money from the Indianapolis-based Lilly Endowment, as well as its consulting and education services. But ultimately, it wasn’t a sustainable model, said Kirk Hadaway, research director for the Episcopal Church.

“They weren’t driven by profit in the same way that other parachurch organizations could tend to be,” Hadaway said. “The lack of profit motivation may have been a problem in their long-term survival.”

As the finances of mainline Protestant congregations have been deteriorating, it’s no surprise that an organization such as Alban would close, said David Roozen, director of the Hartford Institute for Religion Research, who studies organizational change.

“I wasn’t aware that they were this close to closing, but on another level, it doesn’t surprise me that they’ve been feeling some real stress,” Roozen said. “The electronic world isn’t the natural gift of religious systems yet.”

The institute was effective during a particular time, but the culture shifted as people identified less with denominations, said Doug Pagitt, a church consultant and executive director of the CANA Collective Action Network of America Initiative.

“The stylistic brand of a denomination is not as attractive to an uncommitted population unless you grew up in it,” Pagitt said. “The denomination now functions as a heritage rather than a calling forward. It’s a contextual role rather than a defining role.”