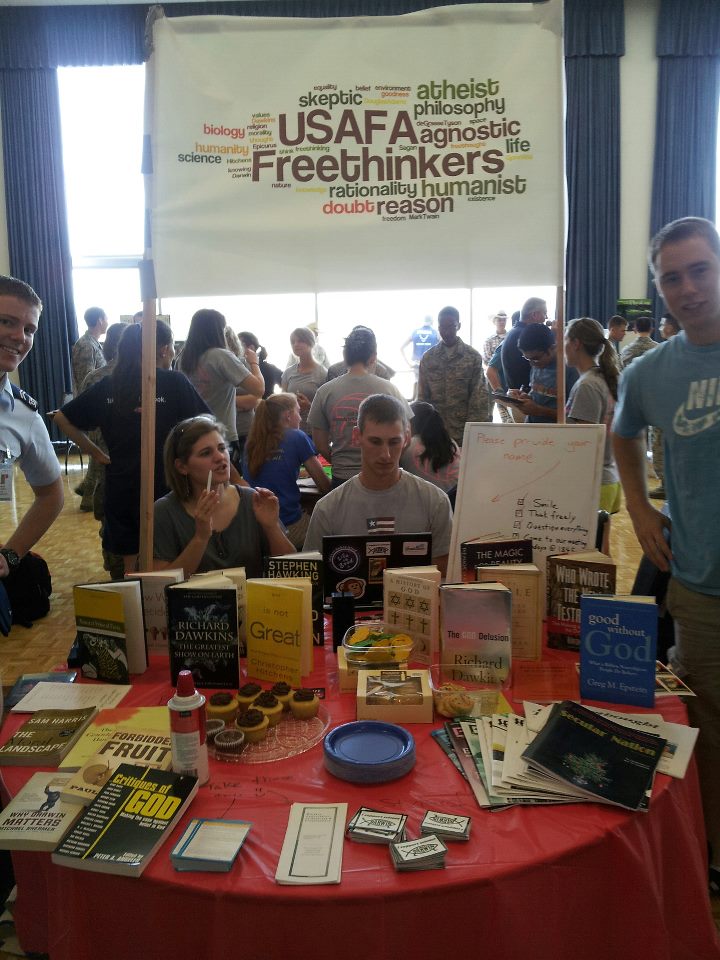 The Freethinkers Club at the Air Force Academy tables for "Ask an Atheist Day." Photo courtesy of Jason Torpy and Military Association of Atheists and Freethinkers.

Todd Starnes of Fox News is claiming that a “double-standard at the Air Force Academy” has created an atmosphere that “encourage[s] atheism [and] prosecute[s] Christianity.”

As evidence of this supposedly anti-Christian environment—one that leads Starnes to “wonder if those in charge of the Air Force Academy believe the only good cadets are godless cadets”—he points to an Air Force Academy cadet who recently removed a Bible verse posted outside his dorm room after a formal complaint was filed.

Starnes then contrasts that incident with an “Ask an Atheist Day” event sponsored by an officially recognized cadet group, the Freethinkers Club, suggesting this demonstrates a pro-atheist Academy agenda.

In Starnes’s eyes, the fact that the Freethinkers Club's event was advertised over email and on bulletin screens indicates that the Academy is “[encouraging] atheism.”

To defend this point Starnes quotes Mikey Weinstein of the Military Religious Freedom Foundation, who said, “They are proselytizing for atheism… What if this was ask a Muslim day or ask an Evangelical Christian Day?”

What if, indeed? Surely it would be unfair of the Academy to only allow atheists to hold informational events. And yet Starnes’s own piece quotes a statement from the Academy acknowledging that other groups do host such events:

“‘The Academy allows all cadet groups to host information fairs regardless of espoused religious beliefs or no beliefs at all,’ the statement read—noting there were also events scheduled for Christians and Muslims.”

In other words, the Academy is fostering an environment where both the religious and the nonreligious can share their beliefs with one another and promote events that raise awareness—making it easier for people to both locate their own community and become more knowledgeable about and less afraid of others.

“The intended outcome [of “Ask an Atheist Day”] was for people to be less scared of and angry about atheists, not for them to become atheists,” wrote the Military Association of Atheists and Freethinkers (MAAF) in a post about this event, citing a desire to build bridges of understanding between theists and atheists.

“Academy problems will continue so long as nontheistic beliefs are sequestered away from theistic beliefs,” said Jason Torpy, President of MAAF, in a recent interview.

Their work to bridge that gap is making an impact. Torpy notes that MAAF has been involved at the Academy for years and now maintains a close relationship. This relationship has so far led to a thriving local group, Humanist alternatives to worship services during basic training, and connections with fellow officers after graduation, says Torpy.

As for the cadet who voluntarily removed a Bible verse from outside his dorm room: he did so not because Christians aren't allowed to share their beliefs at the Academy but rather because, according to Academy Superintendent Michelle Johnson, the verse's location gave the wrong impression to subordinates about religious impartiality.

You can disagree with that without then claiming that this is an example of the Academy discriminating against Christians. The stated reason for removing the Bible verse—attempting to ensure that no person, perhaps particularly religious minorities, feels coerced or discriminated against—is a good one, whether or not you agree with the actions taken in this instance.

Thus, Starnes has the comparison between that incident and “Ask an Atheist Day” backwards: they were both attempts to encourage a more inclusive environment, not to encourage atheism or silence the voices of others.

Besides, what Starnes’s piece neglects to mention is that in fact the Academy doesn’t support theists and nontheists equally. Christians and other people of faith in the armed forces have access to supportive chaplains—while atheists, agnostics, and secular humanists still do not.

But while there is still work to be done, the Academy is making strides—for example, in October 2013 they announced that they were making the “so help me God” clause of the cadet Honor Oath optional.

Like the Bible verse incident or "Ask an Atheist Day," the oath change was not an example of anti-Christian bias; it was a move toward greater inclusivity. As the Academy stated when announcing this change, they want to “build a culture of dignity and respect" for all—including nontheists.

Rather than making misleading arguments, Starnes and others should be leading the charge for a more inclusive Air Force—one where atheists, Christians, and all others can be open about what they believe, find supportive resources and likeminded community, and be in conversation with people who believe different things.