NEW YORK (RNS) The “Noah” epic releasing in theaters this Friday (March 28) promises to be controversial, with director Darren Aronofsky calling it “the least biblical biblical film ever made.” As the story of Noah remains near and dear to people of many faith traditions, the film has already unleashed a flood of criticism.

Darren Aronofsky on the set of “Noah.” Photo courtesy of Paramount Pictures and Regency Enterprises

But Aronofsky says every part of the story fits the biblical narrative. He said the story of Noah illustrates a long tension between wickedness and forgiveness. “All of it’s a test,” he said. “We were trying to dramatize the decision God must have made when he decided to destroy all of humanity.”

In an interview, Aronofsky described where he got the idea for the film, how he plans to respond to critics and why he focuses the film on themes of justice vs. mercy. Some answers have been edited for length and clarity.

Q: Where did the idea for the film come from?

A: I was raised Jewish in Brooklyn. I can’t really remember my first exposure to the Noah story, to be honest. It’s one of those things we’re all taught very, very young. But I got connected to the story in such a deep way when I was in seventh grade. I had this magical English teacher. One day, she said, “Alright, everybody take out a pen and paper, and write something about peace.” I wrote a poem called “The Dove” about Noah. It turned out it was a contest for the United Nations, and I ended up winning the contest and reading the poem at a UN convention a few weeks later. It was the first time I perceived myself as maybe a storyteller. Noah has sort of been this patron saint, because it was the first time I ever really wrote something that won something.

Q: So how did you come back to the story?

A: After I made the film “Pi,” I was looking for a next film and started thinking about Noah. It didn’t happen for a few years, because Hollywood wasn’t really interested in making kind of a biblical movie. The idea wasn’t around back then, but now it’s very in vogue.

Q: Was this before “The Passion of the Christ”?

A: I actually first set it up in 2000, so yes. But Hallmark came out with its own Noah film, so we stopped working on it for a while. Our first draft was in 2003, and when the film started to happen, my mom tracked down my teacher, who was 78 years old. I invited her to the set, and she’s actually a one-eyed crone in the movie who says, “You! You!” 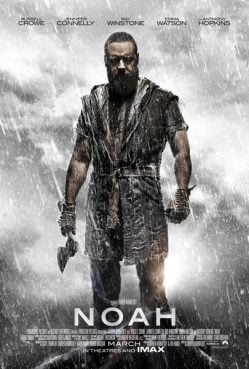 The poster for the movie “Noah.” Photo courtesy of Grace Hill Media

Q: Has making the film made a difference for your faith at all?

A: I don’t think it’s changed in any way. I don’t think this has affected it in either way. It’s been more about bringing this story to life and breathing life into it.

There’s a complexity that’s not necessarily written in the words of the Bible but it’s hinted at. The second thing Noah does after the flood is he goes and gets drunk and then has this falling-out with his son. To us that was a huge clue to their relationship. So we started to build a whole story out of that relationship between Noah and Ham and how they got there. That led to this whole idea of good and bad within all of us, and the struggle of righteousness in all of us, to try to balance justice and mercy in our lives. If you look at the film, every character is sort of dealing with these ideas of wickedness and forgiveness.

Q: Is that tension or struggle between good and evil something that plays out in your own life?

A: The idea of original sin is a really interesting story to help us all think about what goes on inside of us, that we all kind of have a sense of the right thing to do, and we all understand what the wrong thing to do is. And we understand that there’s a decision in front of us.

We started to realize these big ideas about justice and mercy in the film. It started with Noah being called righteous in his generation, and we tried to figure out what that meant. What we’ve discovered is that people who are a lot smarter than us and who study theology talk about righteousness as having a balance of justice and mercy. As a parent, you understand that if you’re too just, you can destroy your child with strictness, and if you’re too merciful you can destroy them with leniency. Finding that balance makes you a great parent.

For us, since Noah is called righteous, we asked, “OK, what is his balance of justice and mercy?” So at the beginning of the film, he clearly wants justice, very much like God. By the end, when the rainbow happens, he has learned mercy, forgiveness and grace.

Q: You take some creative liberties; do you anticipate any pushback?

A: Where are there liberties? Find me a contradiction in there that can’t be explained. Of course there’s liberties, I mean, we’re making a movie here. If you read the four chapters that the Noah story takes place in, Noah doesn’t even speak. How are you going to cast Russell Crowe and not have him talk? Noah’s wife and his sons’ three wives aren’t even named in the Bible.

If you read the story of Noah, it’s very straightforward. The character of Noah just builds the ark and collects the animals. But the struggles, the effort of building an ark, of being responsible for all those animals, being responsible for your family, it’s not explored at all. So how exciting to actually say, “Oh wow, here’s this great story, how do we put human emotion into it?”

Q: So it sounds like you’re not anticipating much criticism.

Q: Do you have any hopes for what people take away from the film?

A: My job is first and foremost as an entertainer. I entertain people, and I try to make films that are exciting, and fun, and emotional, and moving, and filled with action, and that’s all I care about.

A: Yeah, but that’s not real. I think that’s the greatness of these stories, is that in that first story in Genesis, they talk about how temptation led to sin, and original sin, and how that defines who we are. To me, that struggle is a really great metaphor to understand our lives, how we live every day. All religion deals with that.

Q: If I were to guess which scene would make some people uncomfortable (without revealing spoilers), it seems like there’s a part where Noah appears to be in almost direct disobedience to God.

A: All of it’s a test. We were trying to dramatize the decision God must have made when he decided to destroy all of humanity. At the beginning of the Noah story, everything is wicked and God wants to start over. The pain of that, the struggle of that, must have been immense. To basically go from creating this beautiful thing to watching it fall apart, and then doing this horrible thing where you have to try and start again.

So we tried to take that huge cosmic idea and put it into a human’s hands. That’s what Noah’s story is. If you think about that moment, when God looks at the wickedness, it grieved him to his heart. We wanted to get that grief, that struggle, and stick it into Noah, so we can understand as people what it must have felt like. What would hurt more than to do — in vague terms — what Noah is about to do? Which for us was an exact metaphor for what the decision was, what the Creator went through. But he chose love! He chose mercy, which for us is the exact same story as the story in the Bible, just put into human terms.