Christianity Today reports that Cedarville University is strengthening its ‘complementarian’ stance (a theological position that forbids women to “teach or have authority over” men and teaches that men stand in authority over their wives.) In a new move, the Ohio university has also recently restricted Bible and theology classes taught by female faculty to female students only.

“I’m just gonna preach to you what the text says.”

Those, in fact, are the exact words used by Cedarville University president Thomas White in his March 10 chapel address, to which I listened in its entirety. If I may translate that into the vernacular, “I’m just gonna preach to you what the text says” means:

Don’t even bother arguing with me, because I’m just the mouthpiece of God.

White’s text was 1 Corinthians 11:1-16 — a passage attributed to St. Paul and one that is more than a little confusing, since it says things like

Again, along the lines of “just what the text says,”  White quickly insists that anyone taking a “feminist” or “egalitarian” approach to the Bible has no respect for the Bible and basically disregards it altogether. So, for the young impressionable student, the choices are:

#1 Believe what White is saying, lock, stock, and barrel

(That there might be other intelligent and compelling ways of reading the text is not entertained as a possibility.)

He says that those things are obviously culturally specific to the time and place in which they were written.

The only problem? The text itself — St. Paul, if you like, says that “nature” — not culture — teaches us what is what regarding men and women and their hair.

White tipped his own hand, though, in favor of long hair on women, in a rant that even he seemed to realize verged on inappropriate…

“If you’re here and you have short hair and you’re female and you have short hair, that doesn’t mean this is a problem for you […] although I do really like long hair, I mean, I think it’s beautiful…I think, I mean, girls with long hair, God’s given you a blessing there, I…grow the hair out. […] My wife has long hair. Now you know why she has long hair. Cuz I really like her long hair…it’s pretty. I’m going to stop before I get fired.”

And he even approved of men having long hair, as long as that long hair is accompanied by sufficient signifiers of culturally coded masculinity:

“If you wanna be a guy with long hair, have a [big beard too]. Like Duck Dynasty…be a man.” 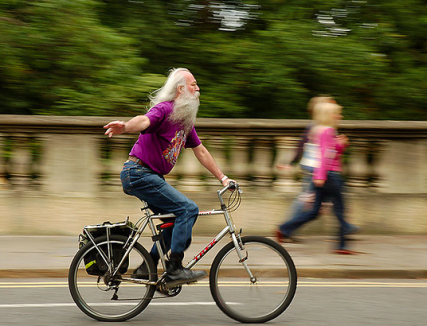 The same cannot be said for numerous students, former students, and former faculty from Cedarville, who find the institution’s tone and tactics reprehensible quite apart from the serious theological questions involved.

When people raise alarm bells at your activities, you wear it as a badge of honor — we’re being persecuted for the faith! — and keep right on going.

Note: Just for the record, White’s chapel address also contained a weird rant in which he urged “men” to “grab their shotguns” in response to the widespread abuse and trafficking of women and girls. But that is a post for another day.