NEW YORK (RNS) The American Bible Society will sell its 12-story building on Broadway, vacating prime real estate in the heart of Manhattan that serves other evangelical ministries.

The society provides space to several New York-based evangelical organizations, such as Q Ideas, Redeemer Presbyterian Church’s Center for Faith & Work, the Museum of Biblical Art and Young Life. Through the years, the building had become a destination for Christians in the city.

The 200-year-old ABS first occupied the 1865 Broadway address in 1966 with a ribbon-cutting ceremony attended by Billy Graham. The organization has not made any decisions about a new location, but a spokesperson said it remained committed to New York City.

“The decision to sell the property was made to unlock the value of the site to further the mission of American Bible Society,” board Chairman Pieter Dearolf said in a statement. “I believe we will always maintain a presence in New York City, the epicenter of American culture and commerce.”

ABS was last in the spotlight in January, when it named Roy Peterson to succeed Doug Birdsall as president. Birdsall was fired by the ABS board in October after only months on the job. The former director expressed surprise when he was told that ABS was selling the building. 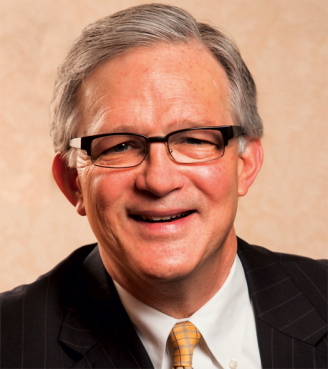 Doug Birdsall, who was fired as president of the American Bible Society. Photo courtesy of Doug Birdsall

Birdsall pointed to other historic ministries that have waxed and waned in importance based on their location. For instance, the Presbyterian Church (USA) has declined since it moved from Manhattan to Louisville, Ky. After the Salvation Army tore down its London building and built a new one, it was able to create a self-sustaining international headquarters, by renting out part of the building, he said.

“Many ministries have left major cities for lower cost in other areas but often at the expense of ministry impact,” Birdsall said.

Birdsall estimated that ABS occupied about 40 percent of the building and rented out the rest to other organizations. The land, he said, is likely worth around $300 million. “The base of the building could itself be a gold mine given the astronomical level of retail rents in the area,” reports Cranes New York Business.

Cushman & Wakefield, a real estate firm with a mission to “help clients turn fixed assets into dynamic assets,” will help the organization sell the property and select a new site.  “Their number one criteria is not to find other Christians (to buy) but to release that space for assets,” said ABS spokesman Geof Morin.

ABS also has about 80 people in its offices outside of Philadelphia, about the same number of employees in its New York headquarters, Morin said. He said that the organization faces updates in code requirements costing tens of millions of dollars within the next 18 months and plans to sell the building in the next 14 to 15 months.

“We know and we’re honest about how it’s expensive to be in New York City. We have no intention of abandoning it,” said Morin, suggesting that the organization is determining whether to buy, lease or rent property. “Where we put our core operations has not been determined.”

Before Birdsall was fired, he had proposed replacing the existing building with a 30-story structure that could include an Omni Hotel and space for other ministries to rent. He said the Hobby Lobby-founding Green family was interested in getting involved in a Bible exhibition.

As Birdsall moved forward with plans for a new building, the board thought the staff had a lack of transparency during the process, creating tensions and misunderstandings, he said. Other evangelical leaders stood by Birdsall after his firing.

“The vision requires a certain amount of risk,” Birdsall said, given how expensive it is to own a building in New York.

The building’s greatest asset was its location, close to Columbus Circle, Lincoln Center and Central Park, said Gregory Thornbury, president of The King’s College.  “That is one of the most enviable plots of real estate on the island of Manhattan,” he said.

King’s, the only Christian residential liberal arts college in an urban center, recently moved, relocating from the Empire State Building to lower Manhattan next to Wall Street.

“Evangelical institutions have abandoned the cities,” Thornbury said. “New York is the seat of power on planet Earth, so it takes a constant vigilance and focus and determination to stay in the game.”