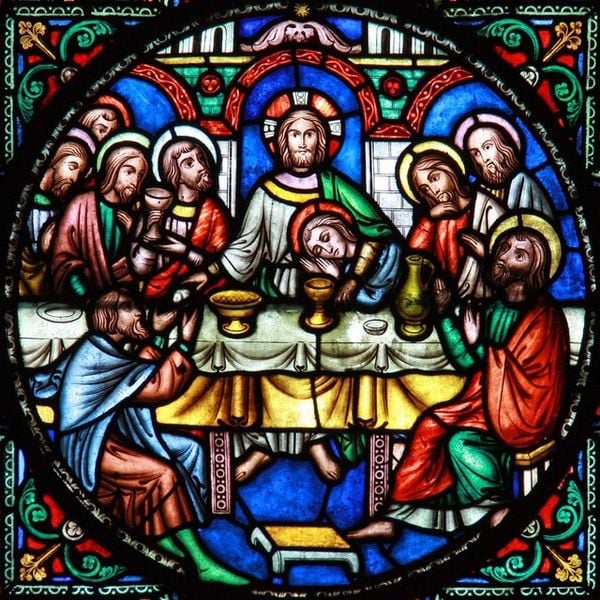 Stained glass window of the Last Supper from Ely Cathedral

Over at Religion Dispatches, Rebecca Cynamon-Murphy — a Christian woman married to a Jewish man — urges her co-religionists to forego the increasingly popular American Christian practice of hosting Passover seders.

Christians celebrating their own Passover do unwitting harm to the Jewish people because they ignore centuries of persecution of Jews—and they do harm to themselves by ignoring their real-life Jewish neighbors, treating them as relics rather than people.

Beyond that, Cynamon-Murphy notes that Christians like to interpret the ritual meal, which makes mention of the Israelites’ slaughter of a lamb at God’s command, as pointing toward Jesus’ sacrifice. This raises the specter of supersessionism — Christianity’s traditional view of itself as superseding Judaism — in the context of a Jewish ritual. Offensive!

Personally, I’m not offended. Christians started off as Jews, and if we started to ask them to strip away all the Jewish textual and liturgical and theological appropriations they’ve made over the years, there wouldn’t be a lot left of the religion. Moreover, they’ve got their own stake in the Passover banquet, inasmuch as all three synoptic Gospels present the Last Supper as a seder.

Those of my own co-religionists who are offended by Christian seders should try to understand what has motivated them. Here, for example, is how Dennis Bratcher, a Church of the Nazarene minister and retired professor of Old Testament, introduces his guide to celebrating a Chrsitian seder.

There has been increasing interest among Christians in this ancient festival. There are various reasons for this renewed interest: an increasing sensitivity to cultural and societal problems and a corresponding desire to learn about others; a renewed awareness of the importance of the Old Testament Scriptures as Christian Scripture; a desire or even a need in our modern world to recover a sense of the sacred through liturgy and sacrament; the willingness to find new and innovative ways to worship; and perhaps even the enjoyment that comes from acknowledging the continuity with a 3,000 year old community of faith.

As for supersessionism, Bratcher pretty much pulls that punch:

It is presented very deliberately and purposefully as a Christian service, with no apologies. Yet, there has also been a deliberate attempt to preserve the spirit of the Jewish traditions and experience in the service, and to respect the faith journey of Israelites and Jews across the centuries. For that reason, apart from the fact that it will likely be Christians who are participating in the service, the thoroughly Christian dimension will come at the end of the service. After all, that is really how God chose to work in history: to the Jew first, and then also to the rest of us!

Note the “also.” Of course, Jews who want to give their Christian friends a good taste of Jewish anti-supersessionism should invite them to their own seders. In contrast to Bratcher’s Christian Haggadah (seder booklet), ours emphasizes the critical importance of each of us regarding ourselves as personally liberated from Egypt by God. There’s also the parable of the four sons, stressing the good one who speaks of the events in terms of “we” versus the evil one who speaks of them in terms of “you.”

Above all, the Haggadah tells the story of the Exodus by suppressing Moses’ role almost entirely, in order to stress that this was accomplished for us by God directly, with no intermediary required whatsoever. Get it?

Jesus, I suspect, gave Moses his due at the Last Supper. If Christians like Bratcher want to do the same at their seders, I’ve got no objection. Hag sameach!