(RNS) The Mustang, Okla., school board voted Monday (April 14) to adopt a Bible course developed by Steve Green, clearing the way for the Hobby Lobby president, whose suit against the Affordable Care Act is currently before the U.S. Supreme Court, to enter another charged arena at the borderline of church and state. 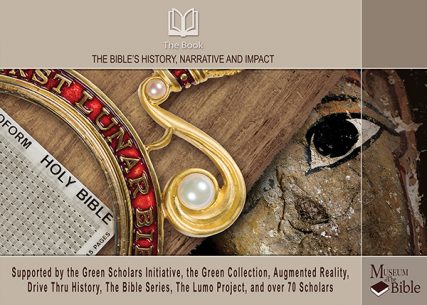 A Bible course developed by Steve Green. Cover photo courtesy of Museum of the Bible

The board, whose district is practically in Hobby Lobby’s Oklahoma City backyard, agreed to beta-test the first year of the Museum of the Bible Curriculum, an ambitious four-year public school elective on the narrative, history and impact of the Good Book.

For at least the first semester of the 2014-15 year, Mustang alone will employ the program, said Jerry Pattengale, head of the Green Scholars Initiative, which is overseeing its development. In September 2016, he hopes to place it in at least 100 high schools; by the following year, “thousands.”

If successful, Green, whose family’s wealth is estimated at upward of $3 billion, would galvanize the movement to teach the Bible academically in public schools, a movement born after the Supreme Court banned school-sanctioned devotion in the 1960s but whose steady progress in the last decades has been somewhat hampered.

The Green curriculum “is like nothing we’ve seen before,” said Charles Haynes, senior scholar at the First Amendment Center and editor of a booklet sent out to all schools by the U.S. Department of Education in 2000 on teaching religion in public schools. “It’s unique in its ambition and its scope and its use of the latest technologies. I think school districts far from Oklahoma will take note.”

So will civil libertarians. In an award acceptance speech last April before the National Bible Association, Green explained that his goals for a high school curriculum were to show that the Bible “is true,” that it’s “good” and that its impact, “whether (upon) our government, education, science, art, literature, family … when we apply it to our lives in all aspects of our life, that it has been good.”

If realized, these sentiments, although shared by millions of Americans, could conflict with the court’s requirement that public school treatment of the Bible be taught in a secular, academic fashion.

In the same speech, Green expressed hope that such courses would become mandatory, whereas now they are usually elective.

Green’s move into public school curricula grew out of his second-best-known project (after the lawsuit): a 430,000-square-foot museum of the Bible due to open in 2017 several blocks from the National Mall in Washington, D.C., that will feature objects from his family’s 44,000-piece collection of biblical artifacts.

A little over a year ago, said Pattengale, the realization that a high school curriculum could “help millions of students worldwide” understand the Bible’s importance came to seem even more pressing than the museum. Having created an international network of scholars to assist the museum, Pattengale led a crash initiative on the curriculum. He describes the first year, which takes the project only to its quarter-way mark, as a multimillion-dollar effort involving more than 170 people. “It will never recuperate its expenses,” he said, but “there’s no desire to make money.”

He describes the program as “robustly unique.” It divides its topic into three areas: the Bible’s narrative; the history of its composition and reception; and its impact on human civilization. The spine of the first-year program (the only text completed so far) is a 400-plus-page book, currently spiral-bound, featuring 108 chapters divided into five-day-a-week lessons.

The book links to a dizzying array of state-of-the-art digital enhancements (Pattengale counts 550), including one where illustrations “come alive” as video on the screen of a smartphone; original lectures by Green Institute scholars; clips from the Mark Burnett/Roma Downey miniseries “The Bible”; and deep digital access to the Green’s biblical collection.

Asked to describe a typical chapter, Pattengale (who also serves on the Religion News Service managing board) outlined a “narrative” segment on creation that includes a summary of the Bible account; a section on how subsequent scientific discoveries relate to what the Bible says; and a consideration of key reasons it was written. A sidebar called “Are People Created Equal?” explores the Book of Genesis’ influence on that idea through history, including the famous phrase from the Declaration of Independence.

Contrary to popular assumptions, there is nothing unconstitutional about teaching about the Bible in public schools. The same Supreme Court ruling that outlawed school-sanctioned prayer in 1963 qualified that “Nothing we have said here indicates that such study of the Bible … when presented objectively as part of a secular program of education, may not be effected consistently with the First Amendment.”

The key words, of course, are “objectively” and “secular.” Haynes suggested that, constitutionally, “the bar is actually low — I think it’s hard for judges to get beyond the surface to questions of what a sound academic course looks like — but much more difficult to develop materials that actually both reflect constitutional principles and are academically solid.”

Added Southern Methodist University’s Mark Chancey: “The devil is in the details” of each plan.

Of his boss’s 2013 speech, Pattengale said: “The curriculum may or may not espouse those views. The last people (Green) wanted to hire were scholars who would embellish the facts to support his religious position.” A chapter with the provocative title “How Do We Know That the Bible’s Historical Narratives are Reliable?” will include diagrams charting the commonality of multidisciplinary scholarly findings with the biblical account — or the lack of such commonality, he said.

In Mustang, Green could not have asked for a more sympathetic research partner. Religious observance in the Oklahoma City bedroom community is largely Christian, and the majority of Christians are, like Green, Southern Baptist. The nearest two synagogues are not in town — and are populated with Messianic Jews who believe in Jesus. In 2005, when a previous school superintendent canceled the schools’ annual Christmas pageant because of concerns over the separation of church and state,  voters rejected a proposed school bond.

The Greens are a local employer — Hobby Lobby corporate headquarters is just five miles east on Oklahoma Highway 152 — and highly regarded citizens: “They are for real a good Christian family, and have been for years and years,” says Don Anderson, a successful real estate agent.

Said Brady Henderson, legal director for the American Civil Liberties Union of Oklahoma: “We don’t like their Supreme Court brief, but they do give a lot to the community. They treat their employees better than a lot of service industries.”

The vote Monday night was closer than might have been expected: four yeas and one abstention. One former pastor spoke out against adopting the curriculum, citing the innate difficulty of finding common language about the Bible. Abstaining board member Jeff Landrith asserted that the community had not had enough chance to review curriculum. Board President Chad Fulton responded that it would available shortly for examination. One party promising to take a look was the Oklahoma ACLU: “to ensure no students… have their right of religious liberty compromised.”

Soon, many will have a chance to assess it.