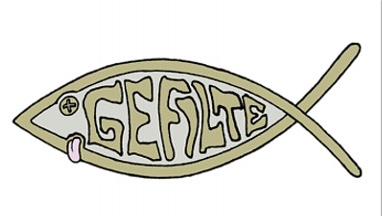 A happy Passover to all our Jewish friends and readers; we hope you find the Afikomen without too much trouble. How is this Roundup different from all other Roundups? For one, I don't normally do this on Tuesdays, so let's see how this goes ...

Frazier Glenn Miller, the former KKK member accused of gunning down three people at Jewish sites in Kansas City, will face federal hate crimes charges. And, as the NYT notes, Miller's shooting spree aimed at Jews actually took the lives of three Christians. Meanwhile, over at CNN, RNS alum Dan Burke explores Miller's connections to the Odinism, "a neo-pagan religion that experts say has become one of the most vicious strains in the white supremacist movement."

Did last night's blood moon signal the imminent return of Jesus? John Hagee and some Christians think so. But "Blood Moon" sounds more like a Twilight novel to me. Just sayin'.

But will anyone really miss it?

The polar vortex(es) of this past winter was bad enough, but now it's being blamed on a new Passover plague: a shortage of gefilte fish. Meanwhile, speaking of the food Jews love to hate, you can never have too much matzo. Until you do. And someone please give this nice Jewish girl a Cadbury cream egg. And read how Passover became Gentiles' favorite Jewish holiday.

Pretty sure we've seen about 5,429 versions of this story already

Right. We get it. Hollywood is trying to lure Christian audiences to the cineplex. Again. Meanwhile, in other news ...

A match not made in heaven

The Mormons are really big into families and marriages, right? Yes, unless you're the (Mormon!!!) creator of a new Mormon dating website, dateamormon.com, whose owner is facing a take-down order from church HQ for misappropriating the church's name and images of the Salt Lake temple.

Coupla things worth noting: Over in the UK, where gay marriage recently became legal, the first Church of England clergyman to wed under the law is raising eyebrows, and two women became the first couple to marry legally inside a church (the Church of England remains off limits). Meanwhile, here at home, a federal judge ordered Ohio to recognize gay marriages from other states, but it's unclear whether that decision will be on ice pending an appeal.

How bad a sin is it to lie about the Vatican?

Did you hear that the Vatican hired a hawk to protect the doves released from the papal window? Turns out it's not exactly true. Or not even true at all.

Not religious at all, but worth pondering ...

Especially if you, like me, have had your fair share of middle-of-the-night wake-up calls from the baby in the next room: "Why babies cry at night: Maybe she's not just hungry. One scientist thinks the chubby bundles have a devious plan: Exhausting a mom [OR DAD!!!!!, thank you very much] delays the arrival of another brother or sister."

There's some 8,000 Sikhs assembled in Pakistan for a major religious festival. Find out here what they're up to.

With that, it's back to Tuesday, where Friday and the weekend seem a bit too far away. Until next time ...