VATICAN CITY (RNS) Hundreds of pilgrims wind their way around St. Peter’s Square as tour guides shout in multiple languages. Beggars have their hands outstretched amid warnings of an invasion of pickpockets from abroad. 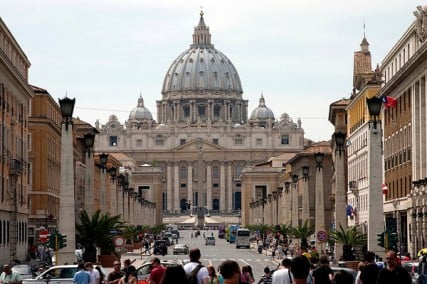 View down Via della Conciliazione to St. Peter’s Basilica in Rome.

Across Rome, hotels are full, streets are clean and the cash registers in the souvenir stalls are singing as the faithful pour in to the Eternal City for the dual canonizations of Pope John Paul II and Pope John XXIII on Sunday (April 27).

Italian authorities are expecting at least a million pilgrims, including heads of state, prime ministers and diplomats from 54 countries. One group of Polish pilgrims is making the 2,000-mile trek on horseback, dressed in medieval costumes, to celebrate Poland’s most famous native son.

Yet despite the vast popularity of the two popes, there is intense debate about whether these canonizations are nothing more than an elaborate public relations exercise — and whether they should be taking place at all.

John Paul II will hold the record for the fastest saint to be canonized in the history of the Catholic Church. John XXIII is even more controversial since Pope Francis approved his canonization with evidence of only one miracle — instead of the two normally required.

“It’s controversial among the saint makers at the Vatican, who consider themselves sticklers when it comes to the miracle requirement,” said longtime Vatican watcher John Thavis, author of “The Vatican Diaries.”

“But Francis was actually using an ancient practice when he waived the second miracle requirement for John XXIII, recognizing that the faithful already know him to be a saint.”

In fact, Francis — who has shown himself as a man not easily bound by tradition — is quickly making his mark on the sainthood process. Last year, he also waived the second miracle requirement for his favorite fellow Jesuit, Peter Favre, who died in 1546 and whose sainthood cause has languished since 1872.

It is not unprecedented to have a pope waive the second miracle requirement. The last one to do so was John XXIII himself, who in 1960 waived it for St. Gregorio Barbarigo, a 17th-century Venetian cardinal for whom John XXIII had a particular veneration.

When John Paul died in 2005, the streets of Rome were filled with shouts of “santo subito!” or “sainthood now!” His successor, Benedict XVI, waived the normal five-year waiting period so his sainthood could be fast-tracked.

Recognizing a miracle is a rigorous process. It is usually based on evidence of a cure that has no medical or scientific cause after an intense and lengthy investigation by a team of independent doctors, theologians and other consultants.

Monsignor Slawomir Oder, the Polish postulator responsible for spearheading John Paul’s canonization, on Tuesday insisted that the Vatican has strictly adhered to canon law and that John Paul is a worthy candidate.

“He was very reflective with a great capacity for prayer and meditation,” Oder said. “John Paul II had that mystical depth of those who find God the source of life.”

Born in Poland, Karol Wojtyla survived Nazi occupation of his homeland and as pope played a major role in the fall of communism. He is considered one of the most influential leaders of the 20th century.

Recognized around the world for his humanity and charisma, he survived an assassination attempt in 1981, traveled to 129 countries and touched the hearts of millions. He became the most traveled pope in history and proclaimed more saints than all his predecessors combined.

Still, questions remain about whether John Paul did enough to respond to the clerical sex abuse scandal, in particular the activities of the founder of the Legion of Christ movement, Marcial Maciel Degollado.

“We conducted a specific inquiry for maximum clarity,” Oder told reporters on Tuesday (April 22). “ From the documents we studied, there was a clear result: There was no sign of John Paul’s personal involvement in this incident.”

John Paul and his closest advisers had held up the Legion and its founder as a model, even though the Vatican reportedly had documentation with credible allegations that Maciel was a pedophile with a questionable spiritual life.

“One of the questions here is whether a pope can be a saint and also make managerial mistakes,” Thavis said, “and I think Vatican officials would say yes.”

“Most people would agree that, as bad as the sex abuse scandal has been, it cannot be used to define John Paul’s legacy.”

In fact, the Vatican’s chief spokesman, the Rev. Federico Lombardi, stressed that a canonization was expected to generate debate within the church and no one was saying the pope was “perfect.”

“No one says the pope is infallible,” he said. “Someone might say John Paul is likable; others say less so. This is the beauty of the church.”

While millions of Catholics remember John Paul, far fewer recall John, known as “the good pope,” but he remains a popular figure in Italy and a patron saint of the church’s more progressive wing.

“When he was elected, he urged us to do more for the sick and those who suffer,” recalled Paola Pesaresi, a former schoolteacher from the city of Rimini. “He was like a father, like a friend. I remember I cried when he died.” 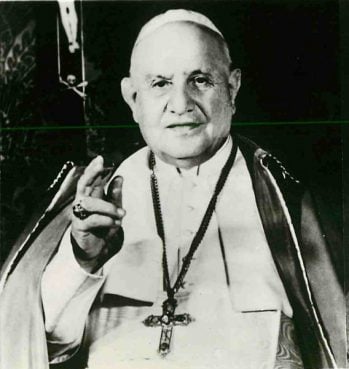 (1961) With his new 25,000-word encyclical, Mater et Magistra, Pope John XXIII has joined two other pontiffs whose encyclicals on social problems constitute the greatest documents of their kind in the modern history of the Church. Religion News Service file photo

‘No one doubts his virtues’

Born Angelo Giuseppe Roncalli, John was the fourth of 14 children and came from the region of Lombardy. His brief pontificate lasted from 1958 until his death from cancer in 1963, yet the aftershocks of his papacy continued to rattle the church.

He revolutionized the Catholic Church through the Second Vatican Council (1962-1965), which reviewed doctrine, replaced the Latin Mass with vernacular language and opened up the church to a broader ecumenical agenda.

His postulator, the Rev. Giovanni Giuseppe Califano, said John had “the perfume of his sainthood” when he was a priest, bishop and pope. When John’s sainthood was announced last year, Lombardi deflected questions about the process, saying, “No one doubts his virtues.”

John’s sainthood may have been fast-tracked to mark the 50th anniversary of his death, but others like Mother Teresa of Calcutta, who was beatified in 2003, are still waiting.

“Every canonization is a public relations exercise, in the sense that it promotes what the Catholic Church considers a saintly life,” Thavis said.

“What makes canonizing popes more problematic is that they bring with them the politics of their pontificates. And although the church tries to keep the focus on personal holiness, most people see it as a judgment on their performance as pope.”