VATICAN CITY (RNS) Popes John Paul II and John XXIII, who presided over enormous changes within the church and across the world, were proclaimed saints on Sunday (April 27) before a crowd of nearly 1 million people in an historic ceremony celebrated by Pope Francis with his predecessor, Benedict XVI.

Around 100 heads of state and government leaders, including the King Juan Carlos of Spain and controversial Zimbabwe President Robert Mugabe, joined the pilgrims who crammed into St. Peter’s Square under gray and dreary skies. Thirty Jewish leaders were among the official delegations who took part at the Vatican. 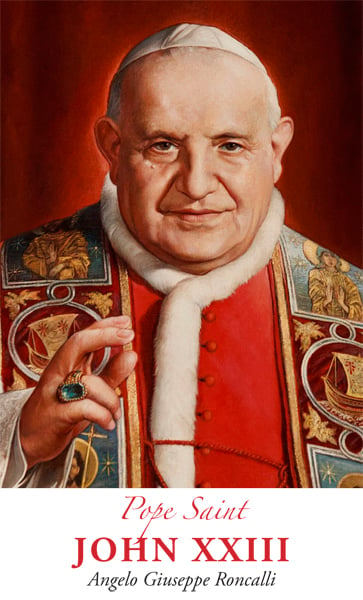 The Pope John XXIII prayer card, which was designed and printed by Pilot Bulletins in recognition of this weekend’s canonizations. Photo courtesy of Pilot Bulletins

“We declare and define Blessed John XXIII and John Paul II be saints, and we enroll them among the saints, decreeing that they are to be venerated as such by the whole church,” Francis declared to the crowd in Latin during the two-hour ceremony.

It was the second high-profile appearance for the frail 87-year-old Benedict since he shocked the world by retiring last year and clearing the way for Francis’ election. With the unprecedented twin papal canonizations and the appearance of two living popes, Sunday’s ceremony was billed as the day of four popes.

The Argentine pontiff greeted Benedict warmly and he sat at the side of the altar with around 150 cardinals as well as bishops and priests who travelled from around the world for the event.

Thousands of pilgrims from Poland, Italy, the U.S. and other countries camped close to St. Peter’s Square as traffic was diverted from the area. When gates opened at 5:30 a.m., pilgrims surged forward with flags, banners and photos of the two popes.

Francis acknowledged John and John Paul as among the most influential popes of the modern era, living through some of the momentous changes of the 20th century. John convened the Second Vatican Council (1962-1965) that revolutionized Catholic life and reordered the church’s relationship with non-Catholics, and John Paul stared down communism and globalized the papacy.

Francis also noted the personal suffering of the two men — John died of cancer before he could implement the reforms he started, and John Paul survived an assassination attempt in 1981 and suffered a long and painful decline due to Parkinson’s disease.

“They were men of courage. They were priests, bishops and popes of the 20th century,” the Argentine pontiff said. “They lived through tragic events of that century, but they were not overwhelmed by them. For them, God was more powerful, faith was more powerful.”

Kate Platta, 62, travelled from Chicago with a group of pilgrims from the U.S. and Canada to celebrate the occasion.

“It’s a great honor, I grew up during John XXIII and we have a great love for him,” she said. “We remember John Paul II for bringing the wall down. He was very courageous, he took huge risks. He brought the church back to life. Ever since he was a young priest, he mentored youth. ”

Despite the huge turnout for the two popes, the double-barrell canonizations have provoked fierce debate within the church. 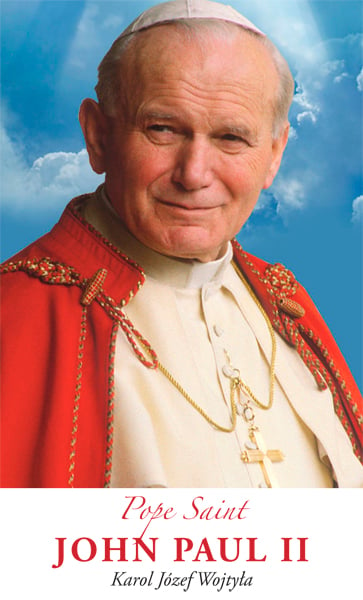 The Pope John Paul II prayer card, which was designed and printed by Pilot Bulletins in recognition of this weekend’s canonizations. Photo courtesy of Pilot Bulletins

The push to canonize the Polish-born John Paul was fast-tracked after his death in 2005 as the crowds at his funeral shouted calls for immediate sainthood. The newly elected Benedict XVI waived the normal five-year waiting period just two months after John Paul’s death.

Survivors of clerical sexual abuse have criticized John Paul’s canonization, claiming he did not do enough to clamp down on accused abusers, punish the bishops who protected them or protect minors.

The Survivors Network of Abuse by Priests (SNAP) said John Paul’s sainthood sends a “dangerous signal” for the church. “It’s time for the Vatican to stop honoring those who enabled wrongdoing,” said Barbara Blaine, president of the SNAP, which represents 18,000 victims from around the world.

John XXIII, meanwhile, was canonized after Francis waived the Vatican’s requirement for two miracles; John had been credited with just one. Born in the north of Italy, John is credited with modernizing the church and when his sainthood was announced, a Vatican spokesman said “no one doubts his virtues.”

Sunday’s ceremony was widely seen as a move to unite liberal fans of John XXIII and conservative devotees of John Paul II, and brings the number of canonized popes to more than 80.

In the past 700 years, only two popes have become saints, Pius V in 1712 and Pius X in 1954, making Sunday’s celebration a unique event in church history. It was the first time two popes were canonized simultaneously.