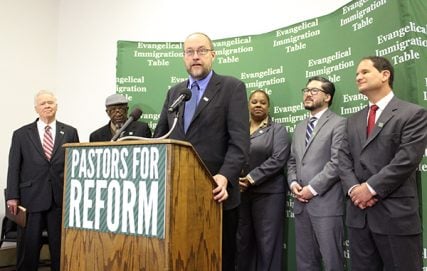 “I didn’t want people to think this was only a Hispanic issue,” said Eugene Cho, pastor of Quest Church in Seattle, at a news conference before meeting with dozens of mostly Republican members of Congress. “This is impacting a lot of people, including Asian-Americans.”

Cho, who is of Korean descent, was among the new faces demonstrating support for immigration reform across racial and ethnic groups and denominations. He pointed out that one out of five Korean-Americans are undocumented.

The Evangelical Immigration Table hosted the conference and worship service before the Hill visits. Among those participating were plenty of returning pastors, too.

“People say, ‘Why are you here again?’” said the Rev. Gabriel Salguero, president of the National Latino Evangelical Coalition. “I say, well, we’re going to be here until it happens, if we have to come 15 or 20 times. It’s our job. … These are our brothers and our sisters, our children, our neighbors.”

Bryant Wright, senior pastor of a predominantly white and upper-middle-class church in the Atlanta suburb of Marietta, said he showed up for the first time because of his frustration over the lack of progress.

“There’s just a greater sense of urgency that the time is now for the Congress to act,” said Wright, the immediate past president of the Southern Baptist Convention, which passed a resolution on immigration reform in 2011, calling for a legal pathway and not amnesty.

“We felt like too many of the conservative evangelical Christians were allowing their views on immigration to be shaped more by talk radio and other news outlets rather than by the Scriptures.”

Some leaders expressed hope that private comments from House GOP leaders could mean there is progress ahead on an issue that has stalled since the Senate passed a comprehensive immigration reform bill in June.

In the past couple of months, religious leaders have met with House Speaker John Boehner’s staff and President Obama and Homeland Security Secretary Jeh Johnson. Faith leaders also recently met with members of Congress in their home districts.

John Perkins, a civil rights activist and co-founder of the Christian Community Development Association, noted that many evangelicals were silent during the civil rights movement but have now spoken up for immigration reform.

“We haven’t always been there,” he said. “We have a possibility to redeem ourselves for the cause of the gospel.”

Paige Patterson, president of Southwestern Baptist Theological Seminary in Texas and another former SBC president, said he’s hopeful that the meetings will move Congress as they hear from more people who want to see reform achieved.

“I believe that in the end you’re going to have the overwhelming support of most of the Republicans in the Congress,” he said.