Mark Gray, director of Catholic polls for the major statistical agency tracking Catholic numbers in the USA, is fed up with “hyperbole chasing headlines.”

And Wednesday may well have given him a fresh batch to lament.

The Pew Research Center's newest survey of Latino faith finds one in four are ex-Catholics and the overall percentage of U.S. Hispanics who are Catholic has fallen 12 percentage points since 2010.

This is very likely to refresh the 2010 scary number -- 1 in 10 Americans overall are ex-Catholics.

Gray's new post for his NineteenSixty-Four Blog for the Center for Applied Research in the Apostolate (CARA) at Georgetown University,  points out “the sky is not falling,”  and updates the 2010 controversy.

That's the "one giant, stubborn, inconvenient (often ignored by the news media) truth that challenges many of the simplistic narratives in the headlines," he says.

Hispanic immigration and higher fertility rates than non-Hispanics mean the number of U.S. Hispanics will keep right on growing, says Gray, even if the Catholic percentage share of the Hispanic "pie" shrinks.

He also points out -- again -- that the Catholic Church has the highest retention rate of any major denomination.

That so many Americans – Hispanic or not -- are ex-Catholics is a factor of just how huge the Catholic numbers loom in U.S. demographic history.

So, does this mean there's nothing to worry about?

Not exactly. Even the most skeptical readers of the Pew Survey would say the Catholic Church should pay attention to the reasons people give for their shift and drift out the Catholic doors. Many said they stopped believing Catholic teachings. Or they just stopped caring. Some chose a more sympatico evangelical faith. Others floated off to claim no religious identity. 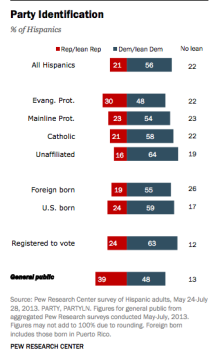 Who else might be alarmed by the Pew findings?  The GOP, for one.

The partisan leanings of Hispanics are decidedly more Democratic than Republican. While Hispanic religious groups differ somewhat on party affiliation, all tilt more toward the Democratic Party than the Republican Party, including evangelical Protestants. There also is a consensus across Hispanic religious groups that a bigger government providing more services is referable to a smaller government that provides fewer services.

Do you think Hispanics are changing the U.S. religious and political landscape in lasting ways? Or do you think they are part of an overall American drift in the same direction?

(Remember, all views, respectfully presented, are welcome. So watch your tone, please.)